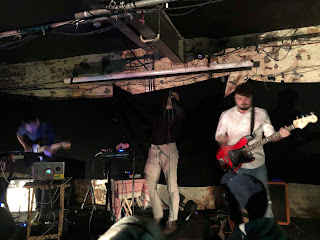 OLA returned to Soup Kitchen on Friday night to launch their new single Orenda with an hour-long set of old and new material full of experimental sounds mixing electronic trickery and live vocals and instruments in an enthralling collection of songs.

OLA have been around for over six years now and it's four since their self-titled debut EP, but it's rare that we get to see them in the flesh these days so there's a curious atmosphere of anticipation as to what has been going on behind closed doors. There's a nod to their past with reworked versions of Elska from that debut EP and Kind Hearts and How Honest from 2015's Call Of The Wild, but the rest of the set gives some very clear pointers to what they've been up to squirreled away.

They've expanded to a three-piece for tonight with additional bass and guitar to give more of a live band feel to their set and it feels like this gives it more of a flow rather than it being a piece of performance art allowing them to build a connection with the audience as the set progresses. This is helped, it has to be said, by the departure of a group of friends of one of the support bands, who stood feet from the stage continuing their own conversations for the first few songs.

OLA's songs possess a cinematic quality to them, at times as if they've written the soundtrack to their own movies. In moments they're quiet, brooding, hinting menacingly at what's to come before blossoming out, either to the sound of a bass or guitar line or a slice of electronic wizardry from Dean or Kevan's boxes of tricks. Vocally Kevan often loses himself in the words he's singing, sometimes decipherable, other times difficult to at points where it's more about the sound than the words. You sense him, and the others, growing in confidence as the set progresses and the audience's reaction to them gets louder at the end of every song.

OLA are a band that are following their own path, refusing to play to any rules and creating something for themselves and hoping that it makes a connection. Tonight they do just that, and as new single Orenda brings the set to a close in glorious fashion, you sense that they're starting to turn their attention outwards, expanding their horizons and carving themselves a place in the affections of the Manchester music public.

The single Ondera is available on Bandcamp.