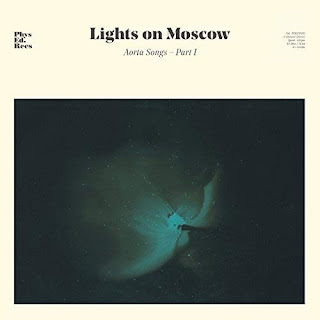 Lights On Moscow is a long-running secret collaboration between Hazel Wilde of Lanterns On The Lake and Justin Lockey of Editors that is about to finally see the light of day with the release of an EP entitled Aorta Songs - Part 1 this Friday. We caught up with the pair of them for a chat about how the project came together, their writing process and their plans for future releases.

This project has been a long time in the making.  How did it come about in the first place?

Hazel: Justin asked me to help out on another project of his called British Expeditionary Force, the idea was that I’d do a bit of backing vocals and play guitar. So I went to meet him to talk about it at this place he used to use as a little studio in Newcastle and as I was about to leave he played me some other stuff he’d been working on - as a kind of after thought really. I loved it and asked if I could take it away to listen to and he goes “yeah, have a go at putting vocals on it if you like”. We started exchanging ideas over email back and forth and within a couple of weeks we had about six songs written.

How did you come up with the name?

Justin: It was the title of some book that I never read but was gathering dust on my shelf for years... some wanky post war soviet foreign policy thing. It looked really boring but the first part of the title ‘Lights On Moscow’ sounded pretty cool. So we took it.

Why is it happening now rather than at some point in the last eight years?

Hazel: It’s hard to explain, we just didn’t feel it was the right time. There were a few opportunities to do it as well - a few labels were really keen on putting a record out but for various reasons we kept stalling and changing our minds about it.

Justin: I think sometimes (and especially when there isn’t an urgent need) it’s good to sit on things and reflect and re-evaluate as time goes on. I certainly didn’t want to get stuck in another project that works in the album / tour cycle. I doubt Hazel did too - .we have enough of that within our other bands and projects! Also, it kinda became a running joke between us after loads of wine, we'd talk about it how / who / when/ everything.. then forget about it. Until the next time we went out.

Hazel: In a way there was a bit of trepidation around the idea of releasing it and making it a formal "band" - we didn't want anything to change the way we'd been working. There was something quite creatively liberating in making music with no expectations or plans to release it.

And what has kept it in the pipeline rather than just a chat that never led to anything like so many ideas for collaborations?

Hazel: because we became super close as mates and because we both love the music that we’ve made together over the years. We always planned to honour that.

Have the songs you've written been around since the start of the project or have they been more recent creations?

Hazel: the ones on this EP (Aorta Songs 1) are some of the first songs we made together. In a way it feels pretty weird to put songs out that kind of represent a past version of yourself. But I think we were both always really proud of what we’d created and it’s a perfect starting point to introduce people to LOM.

Justin: we’ve been writing all the way through in various fits and bursts - and as we out more records out we shall catch up with ourselves!

How has the songwriting and recording worked with the two you in different bands and therefore not often in the same place at the same time?

Hazel: Mainly by exchanging ideas over email. In fact, even when we lived ‘round the corner from one another in the very beginning we’d still work in that way - we’d email each other ideas and then meet up for a cuppa or in the pub and go "yeah these songs are great, I think we're on to something here".

Justin: Its always been about throwing something over to the other person and not really having a time limit / release schedule to have to get it in for... in that way it’s the most liberating way to work ever.. to know that we don’t have to hit any deadlines or anything, it’s just because we want to do it in the first place. There’s something quite interesting And meditative about working that way.

The title of the EP is Aorta Songs Part 1, which suggests that there's more to come. Are there songs already written and recorded for the later parts?

Hazel: yes, that’s the plan. We aim to put a series of EPs out. We’ve got loads of songs done already but then there’s newer ideas floating around too. There's a few different chapters to the LOM story.

Justin: there’s quite a lot of material we’ve already got finished... and I think there’s also a massive pile of stuff that is is the nearly finished pile too.

Is there any particular significance to the title of the EP?

Hazel: Aorta Songs seemed to fit because we felt the songs were had a kind of romantic aspect to them and were from the heart.  The way we made the songs too, you know that had a certain vulnerability to it. I was recording all my vocals through my guitar amp in my bedroom onto this digital 8 track and emailing them to Justin straight away. Neither of us would spend too much time on them. We’d  just knock them out. We were both working in isolation and in the very beginning we weren’t really expecting for anyone else to hear the songs it was kind of like our own secret club. There’s something really intimate about working in that way.

Could you tell us a little about the inspiration and meaning behind the songs on Part 1?

Hazel: it does feel strange to be retrospectively talking about a past version of myself who wrote the lyrics to those songs. I think at the time I was probably a bit lost and searching for some sort of meaning which I think you can tell from the first track ‘Lord, Let Me Know’. I’d say I’m an atheist but even atheists want something to believe in. Having said that, it was also an exciting time for me musically -  I had started working out how to record things on my own and I was able to get my ideas out onto this digital 8 track that I had. On top of that, I was in the early days of a relationship -  with all that entails it gives this whole other passionate slant on some of the songs which isn’t the kind of thing I’d normally write about in Lanterns.

Are there plans to perform live in the pipeline or will Editors and Lanterns On The Lake commitments get in the way?

Justin: I think we will - but like the music, there’s no rush about it, we’ll do it when it suits, or when we feel it’ll be good to get out there and make some fucking loud noises as a premium rock duet.

And what else are the pair of you up to for the rest of the year?

Hazel: I’m in the process of making a new Lanterns album and I’m really excited about how that’s going. Hopefully there’ll be some LOM things happening too.

Justin: I’m deep into touring Editors - Violence and waiting for Hazel to finish her Lanterns record