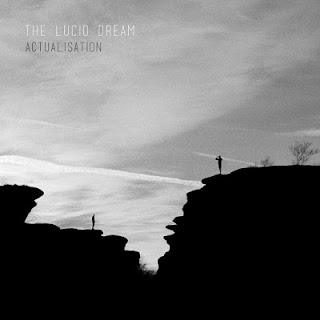 Carlisle’s favourite sons return with their magnificent fourth album, the progressive, acid house inspired Actualisation. Stuart Ralston has a listen (and a dance).

Even The Stars favourites The Lucid Dream could have called it a day back in 2017 when all of their equipment was stolen following a gig in Paris. They didn’t. A crowdfunding campaign saw fans raise thousands of pounds, enabling the band not only to continue, but to thrive. Lesser bands would have folded but it has only made the already strong and bloody minded The Lucid Dream even stronger and more bloody minded.

Singer/guitarist/songwriter Mark Emmerson has used his Roland drum machine to develop some incredibly uplifting tunes on this album. First single SX1000 was released as a one track 12” single back in April. It was track of the day on Even The Stars and back then we said the band have made much of their change of style during the recording of the album with declarations such as "Many acid house records from 1985-1993 have influenced the new record" and "predominantly 808/303-fused groove acid house with a slice of dark dub meets drum ‘n’ bass" and SX1000 with only very sparse heavily treated vocals certainly lives up to the promises they've made to their fans.  With The Lucid Dream, there’s always been a progression to their sound and whilst they’ve always been key players in the psych scene, there’s always been a nod to dance/club/acid house on their 3 earlier albums too. As such, SX1000 was more of a natural progression than some might have thought. A modern record, steeped in the past. It’s my most played slab of vinyl this year and a real favourite in our house.

The early promise that SX1000 brought for what we might get on Actualisation has been delivered. If you are familiar with SX1000 (& if not, why not?), then you will love Actualisation.

Opening with the epic, nine minute Alone In Fear, those drum machines and sequencers are used to full effect, creating the kind of grooves you might expect on an Underworld record. The Lucid Dream fuse their machines with Mike Denton’s driving bass and Wayne Jefferson’s guitars to create their own unique sound.

Zenith (Part One) and (Part Two) are up next and Part One is more traditional, with guitars, bass and Luke Anderson’s drums playing a more prominent role. The instrumental Part One has a nod to early / mid New Order with a melodica being used to great effect and on Part Two, Mark resumes vocal duties, dipped in a little reverb, the “You’re always here in my heart” chorus floats from the speakers. At only two and a half minutes, it doesn’t outstay it’s welcome before SX1000 takes over, dominating side one of the album.

Side two opens with the psych funk of Breakdown. Like a studio jam, Breakdown is the most band orientated track on the album. I recall listening to their second album back in 2015 and when I turned from side one to side two being struck that it actually sounded like a different band - the same could also be said here and that’s no bad thing. One of The Lucid Dream’s strengths is their ability to never stand still, continually pushing themselves and their listeners. Ardency takes over from Breakdown and this time, there’s almost a nod to the Nuggets era bands of the 60s but with their own unique twist - half way through Ardency is brought bang up to date with the introduction of synths and sequencers.  On Ardency, The Lucid Dream have crammed a lot in. It’s easily an album highlight.

No Sunlight Dub brings the album to a close. There’s more melodica and Mark’s vocals are more prominent in the mix than anywhere else on the album. Starting off somewhat melancholic, it sounds like it might be something of a comedown track to end the album with, but it is soon lifted by a drum machine set on overdrive and an urgency to the vocals.

For fans of The Lucid Dream, this eagerly anticipated album is everything we could have hoped for. Over the course of their four albums, The Lucid Dream have never stood still and have always pushed expectations and boundaries, Actualisation continues in that vein. This is a big, bold, and uplifting album. As if that’s not enough, it is released on beautiful red vinyl too, housed in another classic The Lucid Dream atmospheric sleeves.