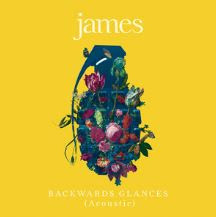 James today released the latest in the series of acoustic versions of tracks taken from their top ten album Living In Extraordinary Times. Backwards Glances featured on the deluxe version of the album only, but has been rerecorded in even more stripped down format for this release.

Like the other acoustic tracks that have been released from the album, this version features Debbie Knox-Hewson on backing vocals and was recorded during the band's May Better Than That tour.

The track is available to purchase on iTunes.