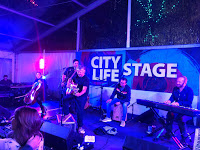 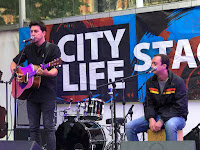 The final night of this year's Manchester Food And Drink Festival was billed as John Bramwell's Greatest Hits and he didn't disappoint a busy crowd as he ran through a selection of favourite I Am Kloot songs as well as a couple of tracks from his solo debut Leave Alone The Empty Spaces and a new song from its follow-up. Support came from Dave Fidler who also previewed a raft of new songs from his forthcoming second album.

Dave Fidler’s set consists mostly of tracks from his forthcoming follow up to his debut album I’m Not Here. Some are inspired by his recent “song a day” challenge where he wrote a song every day for a month and performed them live on youtube. The likes of On The Line and Will I Ever Learn have a deep rich country feel to them and possess a songwriting craft that goes down a storm with a Sunday evening crowd that afford him due respect and listen. Accompanied by brothers Andy on cajon and Rob on bass for parts of the set, he puts a new twist on Easy Come Easy Gone from his debut with an additional verse and a rocked up arrangement. 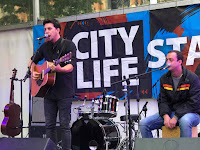 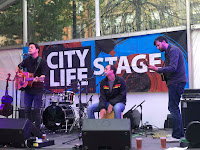 He dedicates another new song to his mum who’s in the crowd to huge cheers and the instrumental Tommy to the woman running the bars who’s just left a pint by their feet. In the spirit they take on both Hit The Road Jack and Get It On (Bang A Gong) and make both look simple such is the talent that runs through the family genepool. Can’t Stand It is another unreleased song that will be familiar to those who’ve seen him before that has the crowd on their feet whilst Silver Spoon and a final new one Skylark are both emotionally resonant and connect with the audience who appear mightily impressed. As Taking Over concludes the set the response tells its own story.

There’s much mirth before John even starts his set with a public soundcheck and after Dave Fidler introduces him as the “brilliant” John Bramwell he claims it as his new stage name before having to adjust the mic stand that’s been set way too high for him. Billed as a greatest hits set he starts with Bigger Wheels off I Am Kloot’s celebrated Natural History debut and it’s clear he’s got the bit between his teeth, losing himself in the intensity of the song until the end where the biggest grin cracks across his face as he reenters the room as the cheers ring around the tent. It’s a transformation between the songs and between them as John jokingly threatens to kick a heckler out even if it’s a free gig, that Dave Fidler isn’t his carer but his “enabler” in Alcoholics Anonymous terms and that his infamous dog Henry has gone off his music and prefers the Australian Pink Floyd. He then delivers Mouth On Me with a ferocity and an otherwordly steely focus. He starts I Believe in the same manner but as the mic stand starts to slip he’s forced to crouch down and follow it to a hero’s applause from the audience. “I chipped my tooth” he laughs at the end “but fortunately it’s anaesthetised” to howls of laughter.

He then plays solo versions of No Fear Of Falling and From Your Favourite Sky to an audience who's attention in the main is rapt to what's going on up on stage, no mean feat for an early Sunday evening in a beer tent in a city centre. The latter in particular feels even more poignant, heartfelt and hits home in the stripped down version, testament to the fact you look around the tent and see songwriters enthralled by one of the masters of their art.

He invites Alan and Harriet onto stage, telling us that he'd forgotten that she was playing with them as he'd lost his phone taking a picture of a 13th Century Spanish villa on a recent holiday and it had all his details of shows on it. He laughs that as a result they've not rehearsed, but you'd hardly tell such is the intuitive connection they seem to have, especially when Andy and Dave Fidler join them later. The crowd love his stories because they're real and there's nothing of the pampered rock star about him as he recalls his travels around such musical outposts as Winchester, Bridport and Selby on his never-ending solo tour of the past few years. 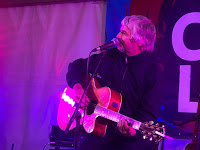 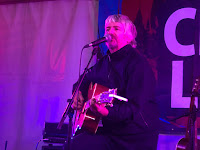 It's why songs like I Still Do see a grown man of six feet six almost moved to tears six feet in front of him because the songs touch deep-buried emotions and talk of them in the simplest but most evocative terms in a way few songwriters ever do on one song let alone across a career. The same gentleman later waltzes with his lady friend as the audience bellow the accordian solo to the ode to drinking and disaster To The Brink, a song John tells us he wrote at Big Hands just down the road before falling off his stool at 2.30 in the morning.

The music is beautiful too. Harriet's cello part during The Same Deep Water As Me has people standing and staring in wonder at how emotionally wrought it makes the song feel, whilst Alan's keyboard dance around the opening bars of Gods And Monsters. With the Fidler brothers on stage, three new songs, the title track from John's solo album Leave Alone The Empty Spaces, the single Who Is Anybody Anyway and a new track Days Go By, don't feel like they ever take second billing to the more well-known songs around them. Whilst as many people might not be singing along, the audience reaction at the end is louder rather than quieter than for the I Am Kloot songs. John tells us that they're doing a show called the Full Harmonic Convergence at Gorilla in December that the five have been working on which will be more new material and part of the reason this was called a Greatest Hits show. "If you love my stuff, it'll fuck you off" he laughs stonefaced, but the intensity of the performance of these new songs ensures that he's just kidding and we'll be equally transfixed by whatever he's come up with.

He finishes with two of his best known songs "for old times sake", demanding that Andy stays on stage and improvises the cajon on both of them. He starts Northern Skies by singing the opening line to Elvis's Suspicious Minds before bursting out in laughter and telling a story of a recording session for the song with Kloot and Elbow where the subject came up. Once he and the audience have composed themselves it ends up in a communal singalong under Manchester's own Northern Skies, a fitting place for the song. They finish with Proof, via a story about a friend in Crewe phoning his girlfriend whenever the town gets a mention on the local weather whilst they go through a tune up. Again the crowd join in, out of tune, coming in too early at the first "without you", but artistically correct as John said earlier. It's a perfect end to a wonderful evening.