TRACK OF THE DAY : Lexytron - Blackmail 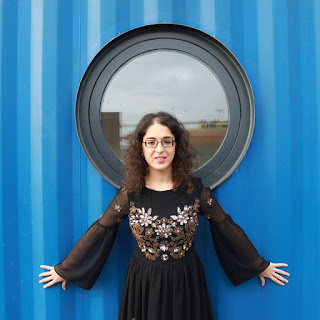 Taken from her forthcoming album Something Blue, Blackmail is the lead track from Lexytron, who describes herself as "Half Greek, half Persian and half English", and features a video set to the 1903 film The Cake-Walk Infernal by Georges Méliès.

The song is described as "like the Devil's take on a love song - sick, twisted and tempting with its roaring riffs and psycho-bitch harmonies" - and the song's chorus line "When I want to tell that I’ve fallen in love, you say I’m sick and I don’t know you enough, but I want to wear you down and send you blackmail, possess you and arrest you then I’ll lock you in jail" suggests that her intentions are far from honourable. Musically it moves from a rock and roll romp in the verses to the chorus whose sweetness in both melody and vocals masks the menace lurking in the words.

The song can be downloaded for free from Bandcamp.

Email ThisBlogThis!Share to TwitterShare to FacebookShare to Pinterest
Labels: Lexytron