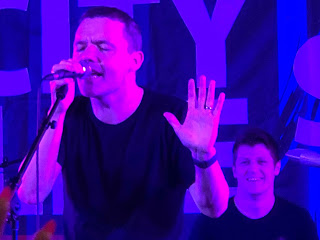 Three years ago The Slow Readers Club played Manchester Food And Drink Festival in Albert Square as one of the attractions to draw a few people into a beer tent. Now, with a top 20 album under their belt, they've got people queuing for hours to catch a very rare full band acoustic set in the tent in front of Albert Hall ahead of their already sold out Apollo show in December.

People have travelled from far and wide for this free show put on by City Life as part of this now annual event celebrating the best of the region's restaurants, bars and brewers, but as it approaches stage time, with all the tables cleared out, it's very clear why most people are here as chants of "READERS" echo around the tent, with people seemingly in competition to who can shout it the loudest and longest. The roar as The Slow Readers Club come on stage is almost deafening. At one time that would have set them aback, but now it feels like it's the norm as they've laid the red sold out signs across both their Apollo and London Scala dates months in advance. They've arrived now and no one can deny it. 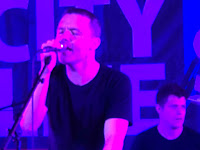 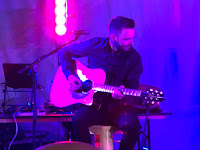 The eight song set features all six tracks from their recent For All Here To Observe mini acoustic album plus first acoustic outings for Never Said I Was The Only One and Through The Shadows. For such a pop-up event the sound is generally spot on the mark and allows the subtle nuances they've replaced the big anthemic riffs and drum patterns with to be heard.  Lunatic and Supernatural, two of the singles from their top twenty album Build A Tower, open up proceedings and the former feels like it could have been conceived in this form and the dark lyrics lose none of their impact. Whilst Supernatural is a band favourite, to us the stripped down version is superior to the recorded version, allowing Aaron to really demonstrate the impressive range to his voice.

That's a recurring theme, but also is the way his bandmates have taken their foot off the accelerator pedal and steered these songs round long winding roads, taking care to ensure that they both retain the immediacy of the records yet having an impact that's every bit as deep and lasting. Jim's trademark stomp is replicated, but on the bar at the bottom of the stool he's sat on, Kurt's acoustic sounds tense, taut and screams the emotion of the song, whilst Dave's shuffling drum patterns add the final touches to these songs, providing both their backbone that allows people to dance to them. 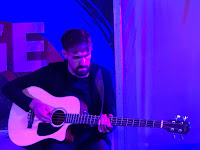 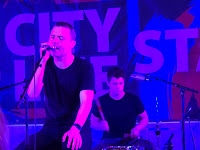 Everyone in the tent seems to know every word, such is the love and the relationship the band have created with their audience. I Saw A Ghost is one of those songs that few bands can create that turns abject misery into celebration, a celebration of the fact that it's OK to hurt if you talk to people about it and the fact that it's OK to be different if you come to terms with it and celebrate what and who you are. On The TV is taken over by the crowd and the song's riff, buried deep in this version, is sung back to them at the end for well over a minute by seven hundred or so people. "That'll sound good at the Apollo" Aaron says with a beaming grin on his face as the understatement of the century. They finish with Forever In Your Debt, the song that should have made all this happen three years ago, a beautiful tear-inducing declaration of love that has the audience clapping along in the breakdown and almost drowning them out.

There's no stopping The Slow Readers Club right now, the momentum they've got feels like it's going to carry them higher and higher and it's magical to witness their rise, the way they've taken every single step up in their stride and retained the human side and the humility that has served them so well over the past few years. It's yet another reason why people are falling at their feet, but tonight was about just how these songs are so versatile that they have all the sonic enhancements stripped away and the core of them is every bit as revelatory and inspiring and they mean the world to the audience in front of them.