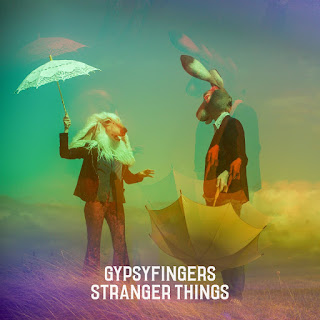 Stranger Things is the second album from Gypsyfingers, the follow-up to their debut Circus Life. As they prepared for the release, Victoria and Luke took time out to walk us through each of the tracks on the record to provide us with some insight into how the song was written and what they're about.

Victoria: I was inspired to write this song by current civil wars and the refugee crisis.  The song is written from the perspective of a young adult whose previous hopes and dreams of the future have been replaced by fear and displacement and day by day survival.  I address the abstract existence of country borders and claims to territory in the face of crisis.

Victoria: I wrote this song for a friend of mine, Maria.  We met in Paris many years ago at 3am in a taxi.  I was waiting at a bus stop for the night bus, and guy joined me at the bus stop, he was waiting for a his friends to pick him up in a taxi.  We established we were going back to the same area, so he invited me to share the ride.  The cab came, and I got in, I was sitting next to Maria.  We lived on the same street in Montmartre and spend a lot of time together after that.  She is from the south, so we went on road trips together to the south of France.  I wrote the song on beach, looking out at the ocean.

Victoria: The story behind this song is of a surfer arriving at the beach to find their wave has been 'stolen' so instead they sit, light a joint and day dream. I observed this scene occur in Cape Town and was inspired to write this song.

Luke: Victoria writes most of the songs for Gypsyfingers but this is one of two songs on the album that I wrote. 'Bruised' is about moving on and not beating yourself up about the past. It's actually a very upbeat modern folky song but the lyrics are bittersweet. Everyone makes mistakes and sometimes you don't always get what you want. There isn't always an answer to everything so sometimes you have to accept the way things are instead of struggling to change a person or situation.

Victoria: This song is dedicated to my cousin who left this world when she was little.  This piece didn't need lyrics.  I expect she is exploring the universe somewhere... Luke and I recorded the piano and guitar live and added bass, viola and some backing vocals.

Victoria: This song is a coming of age song. Making mistakes, learning from them, learning to have no regrets, living in the moment and treasuring to your memories.

Luke: It's one of our favourites so play live as the ending is always different and could go anywhere! I can honestly say it's not like any other song that I've heard.

Victoria: This song is about walking away from a bad relationship, it could be with a an individual of a group of people, or even a job.  The song is also about taking time away (literally or in an abstract sense) to enjoy your self and life having finally had the courage to break loose from something that had been controlling you all this time.

Luke: This is one of those songs that pretty much wrote itself. I just sat down with my guitar and started picking out a pretty guitar part and the words just flowed. Blue Sky is a song about someone searching for happiness and not realising that they have everything they need right in front of them. You can't buy happiness and you can't make somebody else happy, its up to them.

Victoria: This song is about the moment a person dies, that moment and feeling suspended in the song.  I imagined the experience of dying to feel something like being carried by the waves, a sort of weightlessness, gently moving, for eternity.

Victoria: This song is about being too ashamed or afraid to admit that you are still in love. I recorded this song completely live to capture the emotion of the song.

Victoria: This instrumental piece provided us an opportunity to pay specific attention to instrumental parts and harmonies without the restrictions of verses and chorus etc... It was fun developing this piece of musical adventure, ending exactly where we began.  It is called Cobwebs because the piece kind of spirals to the centre with a similar structure as a cobweb.

The album can be bought direct from the band here.

Email ThisBlogThis!Share to TwitterShare to FacebookShare to Pinterest
Labels: Gypsyfingers