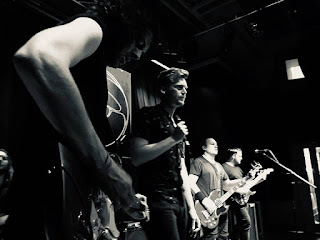 Even The Stars favourites Puppet Rebellion announced earlier this week that tonight’s Band On The Wall gig was to be their last. Playing their hometown to a packed crowd at their biggest headline show is as good a way as any to bow out. Playing with as much passion and enthusiasm as they always have, it didn’t have the air of a final show but a celebration. Support came from one of the most promising local bands Room D.

New kids on the block Room D formed at college at the end of last year and only made their live debut in June. Since then, they’ve headlined The Factory and tonight they return to Band On The Wall bringing with them an army of friends and fans. The band consists of drummer Paddy Cusack, bass player Harry Bruce, rhythm guitarist Jake Spellman, lead guitarist Lyle Cross and newest recruit, singer, Callum McPartland.

Much like tonight’s headliners Puppet Rebellion, Room D conjure up big, funky anthems. Their thirty-five minute set has the audience enthralled from the start. Despite being relative newcomers, they have a fine stagecraft, a chemistry and they breeze through tonight’s show.

Cascade for me is one of the set highlights. It has a Factory influence to it, with touches of A Certain Ratio and Happy Mondays. It’s funky, melodic and optimistic. It’s followed by a faithful cover of The Courteeners Not Nineteen Forever, which suggests Room D just don’t quite have enough material of their own yet for a full set. It goes down well with their mates but we expect covers will soon be a thing of the past. 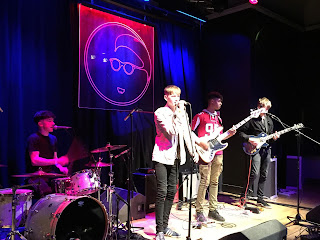 One of their own tunes, Super Slim is in much the same vein as Not Nineteen Forever and vocalist Callum encourages the assembled masses to sing along, but only if they know the words which many of them do and shows how quickly audiences have taken Room D to heart.

We Will Shine slows things down a little but maintaining a groove that seems to be their trademark.  Sunset Paradise is introduced as their newest song before they finish the set with a cover of the Arctic Monkeys’ A Certain Romance, featuring more funky wah wah guitars and some stomping baselines.

It is clear that Room D can already craft out some top tunes and we look forward to hearing more from them. There’s a clear nod to Manchester heritage whilst they have a youthful outlook and confidence too. As they leave the stage, the crowd are chanting their name.

But whilst Room D might be one for the future, tonight is about Puppet Rebellion and saying farewell.

Opening with the upbeat The Pact, lead guitarist Craig Gibson knocks out some fine riffs whilst new guitarist James adds his own touches and vocalist Oli Davies is joined by the huge crowd who sing along with every word. It’s a confident opening before the equally impressive anthemic Hey Now takes over. It’s greeted with a massive cheer from the knowledgeable crowd who are in celebratory mood and intend on showing their love.

Not content with going through the motions, Puppet Rebellion add early b-side Fragments into the mix too, featuring one of Davies’ best vocals. In truth, Puppet Rebellion didn’t really write b-sides. They never had any fillers on their EPs as is evident from Fragments.

Test Pilot is one of their oldest songs where the rhythm section of Henry Rodgers and Jim Halliwell really shine. Dark Thoughts, the stunning ballad that brought album Chemical Friends to an end gets a rare out and is introduced by Davies as “Craig Gibson’s masterpiece.” Dark Thoughts takes Puppet Rebellion into new territory. Stripped of their usual trademark choppy riffs, it represented a softer side that we had hoped they’d visit again on the next album Not only an incredible guitarist, Dark Thoughts demonstrates Gibson is a fine songwriter and we look forward to hearing more from his next project All The Beautiful Skies soon. 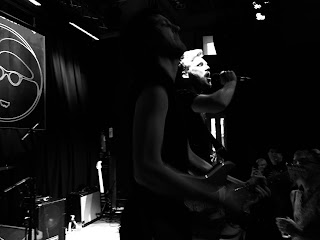 Please Me ups the pace once more and again sees tonight’s appreciative, loyal audience singing along. Please Me and Red Light are some of those big anthems Puppet Rebellion specialised in.  One of the big draws to Puppet Rebellion for me was their dedication and belief. Each and every song on their set lists was delivered with a passion and tonight is no exception.  If anything tonight, they even up their game as is evident on Impact.

Cupboards Painted Red is, as always, a set highlight and dedicated to the many ex-members of Puppet Rebellion. The most poignant song in their catalogue with an amazing crowd singalong tonight. It gets the best reception of the show.

Davies says “a massive thank you” to the crowd for for support throughout the years and the support has helped them “make music that we are proud of and we hope you are proud of. You’ve made it all worthwhile”. A fan quips “we’re not ready” to which Davies replies “I don’t think we are” before launching into an incendiary Slave. It’s not the end quite yet as it wouldn’t be a Puppet Rebellion show without The Greatest Lie Ever Told, now back in its rightful place as the set closer. Davies makes way for founding member and original vocalist Simon Monaghan who sings the final chorus, along with the capacity crowd, many of whom make their way onto the stage for one last hurrah. The band embrace and leave the stage to loving applause from their fans.

We have enjoyed many Puppet Rebellion gigs over the years and they leave us with an impressive back catalogue. From that stunning debut 3 track ep to last year’s outstanding long player (both called Chemical Friends), we will continue to enjoy their music and we wish all of the band - Jim, Craig, Oli, Henry and James - all the best for their future projects.
Posted by Stuart Ralston at 16:35