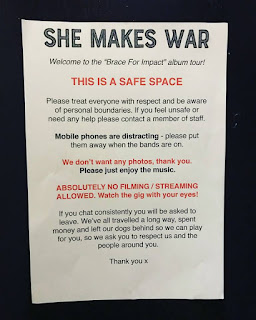 Fresh from the various chart successes of her independently released fourth album Brace For Impact, She Makes War made her way to Manchester with her five-piece band to The Castle Hotel for a sold-out sweatbox of a show that focused heavily on the new album with a liberal sprinkling of tracks from her impressive back catalogue.

Straight away Laura, aka She Makes War, addresses the raging internet controversy about her poster that's plastered on the door and around the venue. A request to not play with your mobile phone, take pictures or video of the set and the most outrageously reasonable request of all to shut the fuck up when the band's on caused some consternation although seemingly not to many, if any at all, of the Manchester crowd and her message to the keyboard warriors who think spoiling another gig goer's night is clear and expletive.

That she should choose such an approach is completely unsurprising to anyone who's followed her career. Where there's been opportunities to "sell out" at a bit of radio play or a support tour, she's retained her steadfast independence. Hence her tours have often been her on her own, taking the train between shows, or a group of musicians she's brought together for that tour. Tonight is the biggest line-up we've seen her play with - Chipper on backing vocals, Charlie on bass, Mike on guitar and Guy on drums - and that allows for these songs to be fully fleshed out other than when the band depart the cauldron-like heat for two songs stripped back from previous records (Paper Thin and Delete).

As you'd expect seven of the thirteen song set come from Brace For Impact, a record she regularly tells us she's proud of, not just the songs, but also the way people have got behind her and continue to do so. It's her most diverse sounding record yet, the likes of the kiss-off to her first boyfriend of London Bites who told her she couldn't sing to which she responded with a single middle finger and the album's lead single Devastate Me and the final song of the main set the soul-searching heart-baring Love This Body are the sound of her letting loose and taking her band with her, while there's a more restrained tone to Then The Quiet Came and Dear Heart which are more contemplative in their nature. Switching between guitar and ukulele as well as demonstrating the varied and evocative nature of her vocals, including clever use of loop technology on them at times, allow her to deliver both sides to her sound perfectly.

The other thing that draws you to She Makes War is her unassuming nature, the way she talks about the subject matter of her songs, she expresses gratitude that people have chosen not to go and see Bono or Billy Bragg tonight instead of her and laughs about the fake encore ritual which they don't follow tonight because of the nature of the venue. That encore is two of her best known songs from previous records Slow Puncture and Scared To Capsize, although you sense tonight's crowd are either die-hard fans who have everything that wouldn't be fazed by any exclusions or newcomers who are intrigued by her unique style and approach. The audience's reaction at the end tells its own story of love and respect for an artist who's furrowing her own path through the trials and pitfalls and glass ceilings of the industry and making her mark increasingly in her own independent way. There's very few more genuinely challenging artists around with such a steadfast belief in their path.

How did the supposedly draconian ban impact the gig though? Well, one guy aside (as well as local photographer Shari who was granted a photo pass so "don't hiss her") no one took photos, there was virtually little conversation during songs and those that did got a frosty stare from someone nearby and people focused on the music. As they should.

Our review of the album can be found here