Average Sex brought their tour to a packed Castle Hotel on Monday night for a sweaty show of new material and tracks from their two EPs and they were joined on two songs by special guest Tim Burgess, whose Ogenesis label has put those records out. They were supported by Feral Family and two spoken word sets from Leon The Pig Farmer.

We're not big fans of spoken word normally, particularly when it's all about political posturing that's about as balanced as most discussions of such subjects on social media. Leon The Pig Farmer takes a different approach though, opening up about mental health struggles (Timebomb and Occupational Health Terrorist), coping strategies (Toolbox) and waking up to a timeline full of nonsense on a Saturday morning (Faceache). 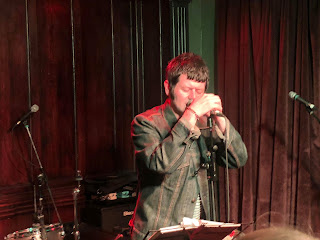 He takes aim at the gentrification of Manchester (and Ancoats in particular) in Cutting Room, an acerbic yet humorous take on the city's newest residents and finishes on a more serious note with Toy Soldiers about the way ex-servicemen are mistreated and forgotten by the government. He does all this with a wry acutely-observed eye and gets a warm reception from a growing crowd.

Sheffield four-piece Feral Family have a real anger and passion about them, six songs that don't take the foot off the accelerator pedal once, without ever sounding one-paced because the energy in lead singer Jamie's delivery is agitated and focused and his band mates provide the driving beats and big hooks that propel the songs along. They open with their last-but-one single Feed The Machine and the unreleased material that makes up most of the rest of the set is equally impressive in both intent and delivery. 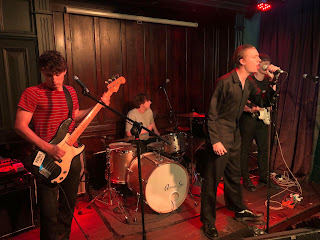 They even survive the mics being switched off and then the lights going out - the band react by continuing to play and Jamie standing on a monitor and mouthing the vocals of what we think was their last single The North. Unknown to most of the room beforehand they get an appreciative response that's well-deserved.

Average Sex have come a long way since we first saw them. They've retained the infectious energy and star quality of their leader Laetitia, who's full of beans despite the sweltering heat that at one point leads her to ask for someone's t-shirt to wipe her face on. Vocally she completely nails both the new material that's a little more serious in tone than their early EPs yet no less appealing as well as still delivering the tongue-in-cheek magic of Ice Cream, Hey Boy and a crazy We're Done. She interacts with the audience with a charm that's impossible not to warm to, through a smile, a finger point, dedicating songs to different people or by joining us for the outro to their final track of the night Don't Wait. She's also developed some funky dance moves to accompany some of the songs.

The band play, often oblivious to their lead singer's antics other than when she leans into them, eyeballs them and gets them to sing with her. New songs like Dumb, Grow Up, Blue Eyed Boy Come Over and their most recent single Erotomania are delivered seemingly effortlessly and when Louise and / or Sam add backing vocals or harmonies the songs are given an immediate lift. Ne M'Oublie Pas has a call and response section that works brilliantly as the song shifts from English to French and back then back again. 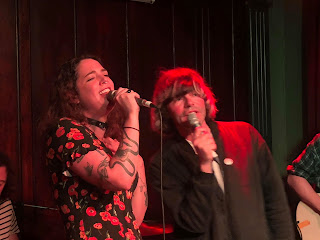 They're joined by special guest Tim Burgess for two songs, the first is Just One Kiss (One Last Kiss), one of the tracks off his 2018 Record Store Day album As I Was Now and the second Ugly Strangers off Average Sex's debut EP. There's clearly a huge mutual affection at play here, Tim having put out their two EPs through his Ogenesis label and Average Sex having supported and then acted as his band on his tour earlier this year and the warmth is very evident to see.

But as Tim departs, Average Sex prove that they're not overawed by such company. We're Done is magical, Laetitia singing of slashing an ex's tyres, setting dogs on fire (not a true story, we hope) whilst acting out the persona of a scorned cheated lover before the final kiss off line of "you say I'm the crazy one, but you're the crazy one." Like everything that's gone before it, it's fun. Average Sex are far more fun than their name would suggest. They make the most brilliant pop music that demands you put a smile on your face and fall in love with them rather than pick holes in their technique. The Castle Hotel was most definitely was smitten.