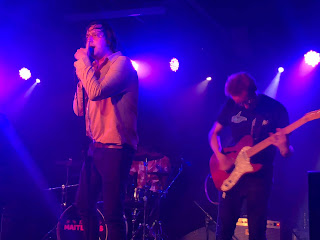 The Maitlands played their biggest headline Manchester show to date on Saturday night at Academy 3. Always entertaining, more musically composed than ever and with their unique front man Carl Ingram at the helm, their forty-minute set contained crowd incursions, sardonic wit and a growing collection of outsider tunes that stand them out from the pack.

There's a huge picture of Jarvis Cocker from a show back in 1993 when the Academy 3 was known as the Hop And Grape and as Carl later stands chatting to a fan leaning against it, the comparison becomes a real one. We're not of course suggesting that The Maitlands are going to write a Common People and headline Glastonbury, but there's something in their battered bruised romanticism that touches the same nerves as Pulp's pre-fame work. Carl isn't your natural front man, but that just makes him even more intriguing - you don't know what he's going to say or do next, because he doesn't either - one minute profound, the next hilariously incomprehensible. 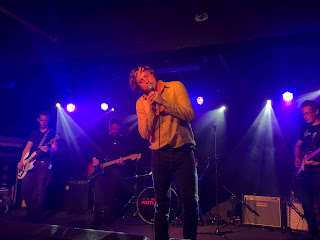 That The Maitlands aren't subsumed by their front man is credit to their musicianship, this line-up the strongest and more focused they've had in their many years and many incarnations. Francis on guitar is a real jack-in-the-box, living out these songs like an excitable schoolkid on the first day of holidays (or as Carl says "a geography teacher on day release"), but it's a fabulous antidote to the cooler-than-thou posturing of others. Matt on bass, Ste on guitar and Saul on drums form the backbone, the solid core that holds the songs together and allows these stories to be so eloquently or ineloquently painted by their leader. They even rope in Rob from support act Heavy Salad for the last two songs - Daunting From Derker and their recently re-released single Arrested Development.

Their set is a mix of tracks from this year's Bury The Hatchet EP as well as previous singles Dissatisfied and A Few Choice Words. There's moments such as when Carl repeats "I cannot complain" over and over again, getting faster all the time and drops down to just drums accompanying him where the adrenaline really starts to flow and the songs, as well as the between-song chat, is laced with humour - Dissatisfied rhyming "taking a piss at the side of the M45" with "it's hard to keep you satisfied" and not sounding ridiculous or Carl simply thanking us for "coming down or up", offering us badges and then finding a 20p coin in his hand which he tries to give away numerous times during the set. It's this slightly weird sort of thing that makes a Maitlands gig so unpredictable and fun - but these days it's their music that's doing their talking for them.