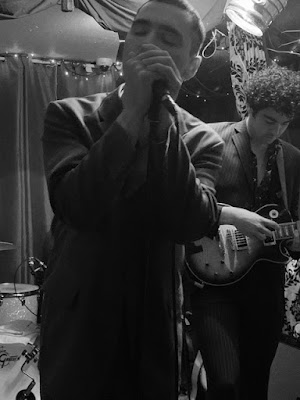 As part of The Murder Capital’s extensive touring schedule promoting their brilliant new album When I Have Fears one hundred lucky people were fortunate enough to witness a very special matinee performance on the launch date at the Thomas House public house in Dublin. Jason Wynne was one of them, having flown in from Manchester for the double-header of this and their sold-out Button Factory show in the evening.

Playing six songs to an expectant audience the band didn’t disappoint. They never do.

Green & Blue is the perfect opener to whip the crowd into a frenzy. You can feel the walls closing in on this most claustrophobic of rooms as the wall of sound takes over you. It’s intense and edgy enough that the end of the song signals rapturous applause from an appreciative crowd that knows this may be the last time we see them in such surroundings. The band, despite a very hectic schedule, look fresh, happy and hungry. The energy they possess is passed to the crowd who give it back a hundred fold. Each and every person transfixed by the beauty of the band.

In celebration of death Don’t Cling To Life is unleashed and they don’t hold back. The energy and the passion are unrivalled. The band complimenting each other, bouncing off each other literally with nowhere to turn. There’s no place I’d rather be than at this moment in time. There’s nothing on the other side.

I defy anyone to tell me that On Twisted Ground doesn’t get inside your mind. This song will make anyone cry and for James to sing this and bare his soul like he does is simply incredible. You can hear a pin drop as we hang on every single word that James sings. The tension is impalpable. I can’t even look at the band during this song. I shut my eyes and float away somewhere else thinking of friends and family who went too soon. I open my eyes at the end and see tears streaming down peoples faces. I’m one of them. The connection between band and audience evident judging by the response at the end of a very special song. There are hugs, lots of hugs. The love this band emits outweighs any negative thoughts you might have. 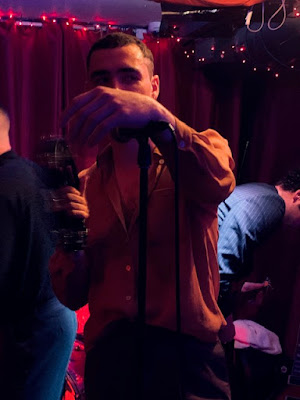 Slow Dance I, despite the name, ups the tempo again and sees the band in full on sonic assault mode. It’s like a furnace and the sweat is pouring off the walls. The intimacy and connection between band and crowd furthers as James wanders into the crowd to observe Slow Dance II with the fans. I stand shoulder to shoulder with him as he looks in on the band as a fan himself. For that moment in time he, like us, is on the outside looking in fully aware what a very special band this is. He dances, he smiles and he hugs before re-entering the fray one last time for Love Love Love.

There are heartfelt thanks from the band and they continue to not hold back as the intensity heightens. James and Gabriel look menacing as ever as the rest of the lads continue to astonish with their musical mastery. James exits the stage leaving us to witness one last bit of brutal musical beauty from Diarmuid, Damien, Cathal and Gabriel with their kaleidoscopic noise twisting, turning and winding before coming to a shuddering halt.

A near perfect performance showcasing, without doubt, the album of the year. There’s no hiding the fact that The Murder Capital wear their hearts on their sleeves. Buy the record if you haven’t already and most definitely catch them live in all their glory.