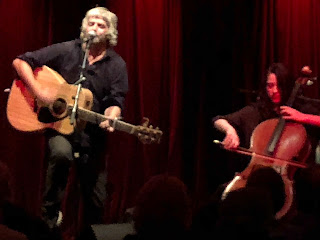 John Bramwell made a welcome return to his second home Hebden Bridge Trades Club for an intimate set where he revisited I Am Kloot classics as well as songs from his Johnny Dangerously period of the early 1990s, supported by Secluded Sea.

Those familiar with the Manchester music scene will recognise Angela Hazeldine and Blair Cowan, the core of Secluded Sea. The former shared lead vocals in both Literature Thieves and Foxtales and it's a delight to see her take centre stage in her own right vocally on these songs, whilst the latter was once part of Twisted Wheel and has also featured in Nile Marr's live band.

Normally playing as a six-piece they're stripped back to three tonight so the harder edges of their recently released debut EP have been softened down, but that doesn't seem to create a problem for them as their strength is in the core of the songs. They possess a timeless quality that runs through them and with Angela's rich expressive voice an ability to lift and drop them at just the right moment. With most of the set unreleased as yet, the likes of Mechanical Love, Run, Kaleidoscope Eyes and No Tears Goodbye form the basis of what could be a very impressive debut album, songs that hold your attention and they do just that to an attentive and appreciative crowd. 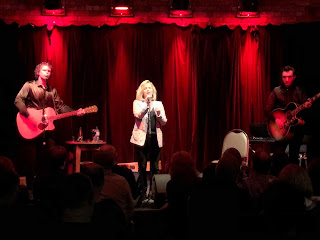 They note that too and the way they interact together and with the audience will serve them well, Angela joking that she'll point out anyone who tries to leave after commending the listening ability of the crowd and that she needs to do a run-up to meet the high notes of Run. But it's the music that really grabs us - beautifully constructed and delivered with genuine warmth and depth rather than simply trying to bowl us over.

Ever since John Bramwell recorded his Live At The Trades album on a hot summer's night here back in 2014, there's been a irrevocable link between him and this most intimate and special of venues with the number of intervening sold out shows in double figures. Most of those shows have been with a band as John has expanded his horizons with his Full Harmonic Convergence playing bigger and grander venues. There's something though about this place and the beauty of a stripped back set, with just John on guitar, accompanied by Harriet (affectionately known as "the big H") on cello and piano in the latter half of the set.

He starts with Bigger Wheels and b-side The Great Escape, and the observation that he's playing a guitar that he writes on at home but doesn't use at gigs but which he has with him because he put it in the wrong case. He then laughs at what he's just said because he tells us we all know every one of his usual jokes. Anyone who's witnessed a John Bramwell solo show will know that it's not just about the incredible heartfelt and raw songs he's written but about hearing stories of a life well lived and laced with humour.

Tonight he's promised to go back and revisit songs from his You, Me And The Alarm Clock mini-album released under his Johnny Dangerously monicker back in 1990. He talks about how he had to relearn the likes of the title track and Pierfront Arcade as well as live favourite Black And Blue. He talks of the songs being more complex with more chords than his later work and it's an astute observation as to how he's distilled songs down and made them more focused. They still have the battered world-weary tales running through them and the blackened lyrical romanticism that's still prevalent in his song writing a generation and thirty years on, and they're a delightful surprise for those who've followed him for so long.

He then returns to his I Am Kloot work with a warm self-deprecating Mouth On Me and a simply gorgeous From Your Favourite Sky which reminds us, if we ever needed it, on how he can tug gently at heartstrings and have a whole crowd hanging on every note and word. No Fear Of Falling cuts through the humid air in the dark room which seems to intensify everything whilst Masquerade is wonderfully open and revelatory. 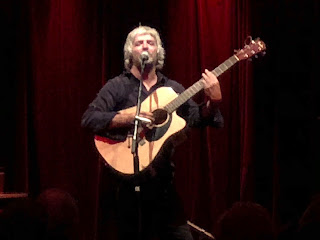 He's then joined by Harriet, who he encourages to keep shouting out the song titles to him as they semi-improvise the setlist, John quipping "it's as if one of us has written them down" before adding "people have low expectations, luckily we've managed to meet them" to huge applause. It couldn't be further from the truth though as the cello simply accentuates the maudlin magic of 86 TVs and Bullets whilst Gods And Monsters has a real punch and kick to it as cello and guitar duel for supremacy.

Harriet takes to the piano for The Same Deep Water As Me, once John has told us he stole the title for the song from The Cure. It's one of his finest song creations though, describing the way we as humans tumble together into the pitfalls of life and love, but drenched in a sense of optimism and that we will get through it.

Time's Arrow is the only song tonight from his solo album Leave Alone The Empty Spaces as he's holding back the newest material for the Full Harmonic Convergence full band treatment later in the year. We're then invited to sing the accordian solo "out of tune as is artistically correct" for To The Brink as John does a mini-waltz with his guitar around the stage.

We're then asked to help record some harmonies for a track from his forthcoming The Light Fantastic album creating much amusement and mirth as the audience try to come in and stop at the right moments and John lightening the mood with his interactions with us. He then finishes the main set with Northern Skies, asking us to sing along if we want to before chiding himself for being so showbiz, turning to Harriet and telling her that "for a long period, I was seen as cool." There's nothing uncool though about the way Northern Skies captures the particular sense of community of places like Hebden Bridge in a song.

The encore is short but sweet, a solo version of Fingerprints and then a rousing singalong version of Proof, which John tells us is likely to be one of the last times he finishes a set with it as he moves on to new material and shows with the Full Harmonic Convergence. It's a timeless song, like so many of his best, both simple yet reaching deep down into the human psyche and expressing complex emotions so lucidly. And that is why people keep coming back to these shows.