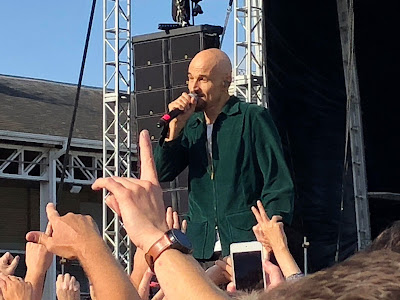 Sometimes the best gigs can take place in the strangest surroundings.  Five o'clock in the evening, in bright sunshine, on a stage at a racecourse with a mix of die-hard fans and those out for a drunken day at the races and a huge gap and fences between band and audience weren't auspicious, but somehow James turned their Doncaster racecourse show into a triumph.

"Play one we know" the cry goes up after three songs from a guy in a suit who looks like he can hardly stand let alone recognise a song before he disappears off to get another pint. This is the stuff you'd expect from a gig that puts hardcore fans up against race-goers, but once James hadn't played Sit Down first up, those around us that didn't wander off actually got into the show, celebrated the big songs they knew and appreciated the ones they didn't - Leviathan and Many Faces got better responses than they've had at some traditional James headline shows because they're great songs and Tim's showmanship really came to the fore, broke down the fences between audience and band and drew everyone in.

"Good evening winners and losers" Tim greets the crowd with before explaining that they change the set list every night, often on stage and don't know what they're doing. "From love to anger" is how they describe their opening two songs - Nothing But Love and Hank - one a communal call of unity, the second a drum-driven rant at the white racists in the White House.

What's It All About follows, ending with Andy's trumpet cutting a path through its winding conclusion and Tim losing himself in dance.  "I'm not coming down to see your iPhone or Samsung" Tim warns us before making his first foray down through the gate and over fences to get to the barrier during Waltzing Along, which gets the crowd going for the first time. It might not be one of James' more ambitious moments, but it's one that's guaranteed to always elicit a reaction. 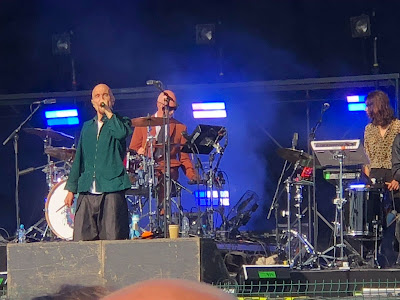 Rather than then go on a run of hits, James tease and take it back with a beautiful rendition of Five-O with Saul's exceptional violin taking centre stage before they surprise us with a song "about the disappointment of love" Busted. Mid-song it breaks down into an almost reggae beat, quite reminiscent of the James of the 1980s, with Saul on drums, Andy on cowbell and Jim shaking the maracas, making it far removed from the original, but the crowd warm to it. "Music depresses me" blares out of the impressive sound set up and they go into another surprise addition to the set in Play Dead.

They then drop a song, because it's "depressing" and set up for She's A Star and Just Like Fred Astaire to be played in their stripped down form with Adrian on cello. The crowd find their voice as the two old favourites are delivered with a new twist, Tim even changing part of the lyrics of Fred to incorporate Doncaster Races.

This one is "parental advisory" he tells us and asks parents to block ears on his command as they move into Leviathan. He's back down on the barrier, joined by Andy for Come Home, encouraging the crowd to join in and then comes amongst us on foot and then over our heads, getting his bald head patted multiple times for his troubles. Come Home and Sit Down send the crowd in ecstasy, the latter a faster harder version than two nights previously in Edinburgh.

Back on stage, they start up Many Faces, Tim can't hear the drums but carries on anyway and the crowd take the chorus and make it their own. They stop, Tim explains the song is about our similarities rather than small differences between us that others want to exploit before adding it's as good as anything they've ever written. The crowd sing it back to them again at the end, a real triumph given that this isn't your average James audience and testament to the power of the song's sentiment.

Sound takes its winding route of improvisation with Andy out in the stands although it's more visual than aural as we can't hear his trumpet as fans flock to him. A stage invader makes it up to dance next to Tim, who throws a glance at security to tell them the guy is OK, but he leaves after about a minute back to where he came much to Tim's amusement. There's a real sense with this song in particular, but the whole set as well, though that they are, for want of a better word, winging it a little, riding high on confidence. Laid finishes the main set and has a harder edge to it than in recent years, mainly through Saul using an electric one instead of an acoustic. 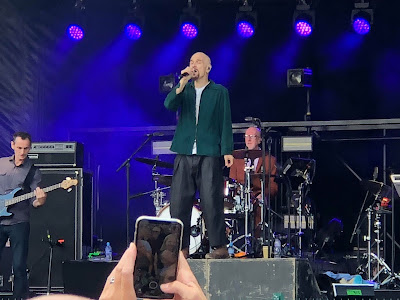 The roars for an encore bring them back out for four more songs. Tim says they're going to take us down, through troughs before bringing us back up to peaks. The crowd clap along to Out To Get You and Attention at the right moments, as both of them build out of the quiet into the loud. The latter has them all turned to Mark as he works his magic with his keys in that long middle section before it comes roaring back in.  Tim introduces Chloe to us before Attention, which causes Saul to walk up to her and shake her hand in a moment of amusement.

Their intended finish is Getting Away With It (All Messed Up), their unofficial anthem, with Tim back down on the barrier. There's no way they're going anywhere though - Sometimes is met with a huge roar, crowd-surfing and then as it stops and the crowd takes over, Tim admonishing the others for stopping playing by telling them "don't leave me standing here like a dickhead" so the band kick back in, there's one last surf and then they're gone.

James played Nothing But Love, Hank, What's It All About, Waltzing Along, Five-O, Busted, Play Dead, She's A Star, Just Like Fred Astaire, Leviathan, Come Home, Sit Down, Many Faces, Sound, Laid, Out To Get You, Attention, Getting Away With It (All Messed Up) and Sometimes