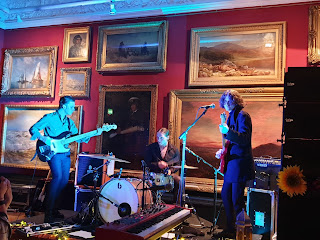 The Blinders headed to Blackburn on Thursday night for an intimate stripped-down set in the unusual setting of Blackburn Museum supported by Julia Bardo and Millie McLeod. A seventy-five minute set saw them play very different versions of songs from their debut album Columbia and a series of songs from their second album writing sessions.

The tenth edition of Night At The Museum, an irregular series of gigs held in the beautiful surroundings of Blackburn Museum is a taster for this year's Confessional Festival to be held on the first weekend of September in a disused church on the outskirts of town. Put together as a labour of love by Pete Eastwood, tonight's compere, the festival showcases some of the North's most exciting bands in LIINES, Deja Vega, Loose Articles, Seamonsters and the three acts on tonight's bill - The Blinders, Julia Bardo of Working Men's Club and Millie McLeod of Northern Sports Club. 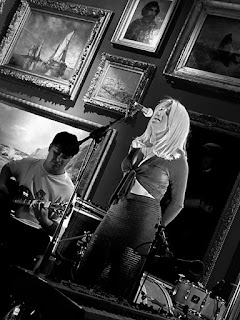 The glowing introduction for the evening's opener Millie saw Pete talk about her incredible voice and he's right on the money in his description. Accompanied by Luke from the band on guitar, her six song set of four covers and two originals certainly had the seated audience stunned by the range of her voice and the emotion that she puts into the songs. She puts her own spin on Frank Ocean's Forrest Gump, Amy Winehouse's Stronger Than Me, Aretha Franklin's I Say A Little Prayer as well as Leadbelly's Where Did You Sleep Last Night? that Nirvana brought to many's attention on their MTV Unplugged album and makes the songs her own. There's two originals in the set too - Easy and This Time - and it'll be intriguing to see how they are transformed into a full-band performance at the festival. 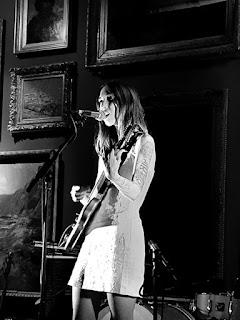 Julia Bardo is going to be very busy. Her band Working Men's Club are signed to Heavenly and seem on an unstoppable upward trajectory while her solo career seems set to take off on the back of her luscious dreamy debut single Desire, which sits dead centre in the middle of her five-song set. With just a guitar in hand, the songs sound different to the soft delicate tones of Desire, with a hardened rougher edge and sheen to them that casts them in different light, but which focuses us on the simple beauty of the songs and Julia's voice, often hidden in the mix at Working Men's Club shows, that more than deserves its own platform in these songs. Used To Be and her final song, a new one that she jokes she hopes she can remember, stand out in particular.

It would have been very easy for The Blinders to turn up and play a forty-five minute set with everything turned down and most people would have gone home happy, but they've put what feels like an inordinate amount of time and preparation into a one-off seventy-five minute show that's a genuinely special event. They take old favourites like ICB Blues, Ramona Flowers, L'Etat C'Est Moi and Brave New World that get the pulses racing and the moshpit bouncing at their shows and reconstruct them into something that distills the raw energy of the songs and concentrates it so that it's their bubbling under the surface, creating a taut tight tension ready to explode but never doing so. 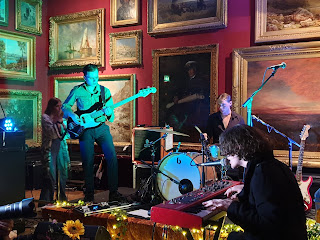 Thomas takes to the keyboards for some of the set, altering the dynamics of both the music and the band and showing us a little insight into how songs start off.  One of the six new songs they play, The Writer, has become a live favourite already, but he tells us it was first written on his mum's piano back in Doncaster whilst Thomas tells us that Everything came from an old iphone recording in Matty's bedroom from when they were still living in Doncaster.  The other four - Something Wicked, Circle Song, Only One I Love and Take Your Mind To The Cleaners - haven't featured regularly among the new songs they've previewed at live shows, but they put to bed any concerns about the difficult second album not living up to the standards of Columbia as we've now pretty much heard enough songs to complete that record should they make the final cut. The songs, Everything and the set-closing Take Your Mind To The Cleaners in particular, take us on a journey, not resting in one place, changing pace and intensity without feeling disjointed or awkward. Whilst they may end up sounding very different to these versions, they sound like a band that's not going to rest on their laurels and who plan to take their fan base on a winding musical trip with the second record.

One of the biggest challenges they will face, and one that tonight showed they're more than capable of overcoming, is to shed the Johnny Dream imagery of their debut. The beautiful well-lit room and absence of stage lights and a barrier between band and audience saw them open up and engage and get intimate. They joke about wine tasting like vinegar and vanilla, Thomas modestly plays down his keyboard playing skills and they still manage to connect without Charlie's prowling round the stage and the adrenaline in Matty's drumming that's replaced with something much more subtle and affecting. With the exception of a few idiots at the back who thought their voices were more important than the band, the audience were hooked by both the new and old material.

Their Live At The Ritz album is available to pre-order.