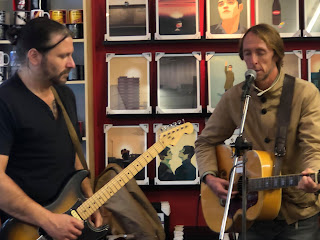 In support of his album River's Edge and the launch show at Band On The Wall in Manchester next Friday Nev Cottee played an intimate five-song in-store set at Vinyl Revival with just guitarist Jimmy for accompaniment.

"The songs are about the weather and lost love" Nev jokes as it starts to rain again outside the shop and City score their fourth goal of the afternoon just as he reaches the end of a song. Their fifth prompts him to give us an extra song as he says he has to match Guardiola while the Liverpool fan who'd earlier been boasting about being top of the league went strangely quiet. This is typical of the laid-back feel and good humour of the afternoon's events as we huddle around the record boxes in the shop.

Even without the instrumentation of the recorded versions, these songs have a timeless quality to them, take Scattered Leaves and the short-but-sweet title track from River's Edge as examples of the rich and redolent nature of Nev's songwriting and the manner of his delivery. Jimmy adds impressive guitar licks, more suited for a room much bigger and a huge PA, but nevertheless still mightily impressive on Hello Stranger and Annie and it complements Nev's world-weary vocals that live these songs perfectly.

We're sure he's sick of hearing about the injustice of him not having achieved greater recognition for his songwriting talents, but the evidence is plain to see and hear even in these most un-gig like of surroundings. He has his sales pitch down to a tee, but music of this quality should be selling itself if the cards were stacked in the right order.

The album River's Edge is available digitally, on CD and vinyl from Wonderful Sound's Bandcamp page.

Nev plays a launch show for the album at Manchester's Band On The Wall on 16th August - tickets are available here.