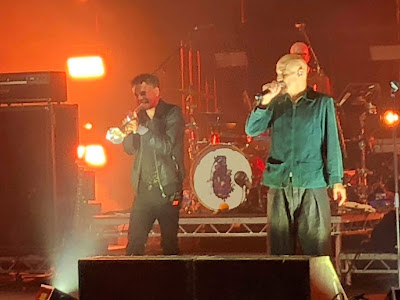 James defied a whole host of technical issues and Edinburgh's draconian decibel limitations to deliver a celebratory evening against the stunning backdrop of the castle towering above the stage in the picturesque surroundings of Princes St Gardens as part of the city's Summer Sessions.

"Turn that shite off" Saul exclaims as the band are already on stage as the PA is still blasting out some disposable pop nonsense. Before they start Tim informs us that the set needs to be different tonight, with slow / fast songs interspersed because of an average noise restriction placed on the gig. As everyone boos, he laughs and tells us to be quiet and Saul tells us we're not allowed to sing along, and that they're going to start with a b-side called Goalie's Ball.

They start with She's A Star and of course everyone sings along. The stripped-down version with the cello is gorgeous and when Andy joins in with a wandering lost in the distance trumpet towards the end, the song takes on a beauty far removed from its recorded version. What's It All About follows, a loud one Tim tells us and adds "we'll beat the health and safety fuckers" and takes us on a long and winding journey, one that's made even more thrilling by the fact they are clearly on a roll from their US tour and totally comfortable improvising, something they need to do by necessity later on.

Leviathan is soaring and glorious, Tim down on the barrier but not out surfing across us. Five thousand hands clap along, whether they knew the song beforehand or not, as it reaches its breakdown and then the song explodes back into life and light.

Then the problems start. Jim's bass is knackered and no amount of trying to fix it seems to work initially. Jim tells a few jokes to try and amuse us, the audience sing "Getting away with it" whilst they decide what to do. Saul suggests "an acoustic version of something and you're not allowed to sing, let's see what happens" as they strike up into Sit Down. It's not immediately clear it is their best known song until Tim starts to sing and then everyone is joined in unison and one voice, with two fingers cocked to the decibel counters, apart from when the lyrics are changed to the original Rough Trade version mid-way through.  Tim attempts a crowd-surf, but is wisely pulled back out.

Jim's fixed and they follow with a glorious uplifting version of Ring The Bells and then a duo of La Petite Mort tracks, Walk Like You and Interrogation. Having been to the US and Canada for a tour for the first time since its release, they've gone back and revisited these for the North American dates and loved them so much that they've brought them back.  This is James at their best, relaxed and confident and less concerned about the number of hits in their set. It produces a conflict between audience expectations and the setlist at times, but when delivered like this, the only solution is to dive in and immerse yourself. 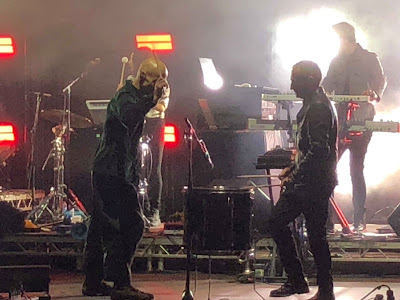 "This got a mixed reaction in America" Tim laughs as they bring out the drums for Hank, a raging attack on the POTUS delivered in a hail of drums and strobes, before moving "from anger to love" for a rousing Nothing But Love and a railing at "nationalism, splits and divisions" of Many Faces. The audience take it off them and sing it back for a few minutes, Tim tells us "it makes everything worth it" while Saul declares it should be "the new national anthem for Scotland as it's the only sensible place in Britain." He might not be wholly correct in that assertion, but no one in Edinburgh is particularly arguing with him.

The main set concludes with a trio of hits. Getting Away With It (All Messed Up) does feel like it has become their official anthem, the sentiment of the band's modus operandi written right through it, and the moment where the band take it and it soars sends the crowd wild. As does Laid, played straight, a headrush whilst Come Home manages to sound modern and relevant and still a throwback to hedonistic days three decades before.

The encore starts with Attention, now almost a duet between Tim and Chloe in its opening section, before the lights then the music drop down and it slowly builds back, the crowd clapping in time (just) until the explosive moment where everyone comes back in. Sound follows, a wonderful twisting ride of a song that's benefitted from a rest for a while and has come back reinvigorated, with new ideas and the crowd singing the "mah bah ooo" line back at a volume that threatens to drown out the band. 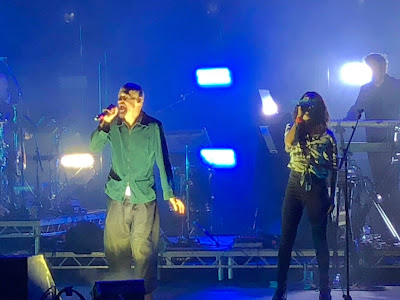 They finish with Top Of The World, expecting the fireworks to kick in from the tattoo as they play it. There's one solitary stray firework in the first verse, but the song ends before the real fun starts up on the hill. It's a beautiful tranquil end to the night though, Saul's violin piercing through the air as it reaches its end.

This was a night with something for everyone, newer songs mixed with old favourites, a crowd that got into the gig and created a connection with the band in a way their previous gig here didn't quite manage. The band are on a roll right now, supremely confident and fuelled by the buzz of having just completed a tour where expectations were left firmly at the door. That's when James are at their best, when they stop worrying about the crowd and be themselves.

James played She's A Star, What's It All About, Leviathan, Sit Down, Ring The Bells, Walk Like You, Interrogation, Hank, Nothing But Love, Many Faces, Getting Away With It (All Messed Up), Laid, Come Home, Attention, Sound and Top Of The World.