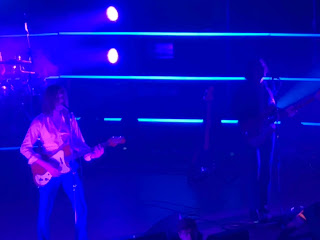 Blossoms concluded their short run of intimate shows ahead of their Reading and Leeds Festival slots with a celebratory night at the Victoria Halls in Stoke supported by Inhaler and Fuzzy Sun. With a set covering both their self-titled debut and Cool Like You plus recent single Your Girlfriend and a David Bowie cover, they had 1,500 people bouncing for their eighty-minute set. 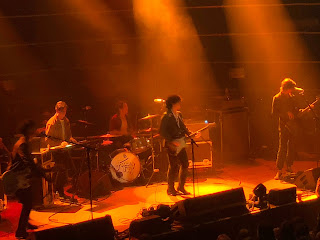 Inhaler open up proceedings and the Irish four-piece go down a storm with the already-packed crowd. Eli’s already commanding stages of this size and their sound is tailor-made for big halls, huge anthemic riffs that immediately grab you and draw you in and they’ve already made connections with the Blossoms crowd who give them a storming reception. The as-yet-unreleased Sink Like A Stone and their forthcoming single suggest that they’ve got much more in their armoury than they’ve revealed to date. They finish with their recent single My Honest Face, which along with It Won’t Always Be Like This, have laid down an impressive marker.

They’re followed by Fuzzy Sun and the Stockport six-piece have been regular support for Blossoms over the past eighteen months so they’re familiar to the partisan crowd. They reveal a number of new songs – including forthcoming single I Ain’t Right before which Kyle asks us whether we want to dance before performing his own moves. They’ve certainly worked and developed those and the way in which they seek to get the audience to cut their own since we saw their first cautious steps onto the live scene back then – they now look and sound like a band that’s focused and confident in their own abilities. They finish on their debut single Want Love to a rapturous response, Kyle almost taking the drum kit out and apologizing for being a dick, but still winning over new fans in the audience. 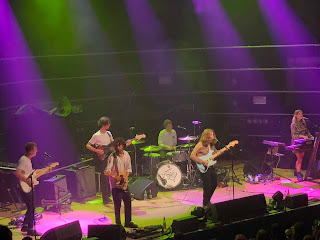 There’s a real buzz as Blossoms take to the stage, fueled by the pre-set playlist that moves from Courteeners to the Human League in the blink of an eye. It’s a clever selection because Blossoms have positioned themselves as the crossover between rock bands and those great eighties pop moments and created a niche of their own. They’re four songs in, seguing together the crowd-rousing There’s A Reason Why (I Never Returned Your Calls), At Most A Kiss, I Can’t Stand It and Cool Like You into one magical mix-tape that has the floor bouncing and a mosh-pit that surges forwards, jumps up and down, moves sidewards, forms a circle and then lets loose. They’re supremely confident these days, Tom having developed into the consummate front man in his moves and the way in which he addresses the adoring masses.

Your Girlfriend, their recent single and likely first pointer towards their third album, shows a different direction but one that retains all the elements that makes them so loved and it’s followed by one of their earliest singles Blow that’s been glammed up for the occasion without losing that surging majesty that stood them out from the crowd back in 2015. Giving Up The Ghost and Honey Sweet show the more pop side of their work to date without crossing the boundaries; the latter in particular being bellowed back both on the floor and up on the balconies by a crowd that’s eating out of the palms of their hands.

Blown Rose reminds up of their ability to write and perform the most beautifully simple yet affecting songs that will go down as classic singles when Blossoms are reassessed at some point in the future and Getaway has exactly the same effect, beautiful battered romanticism that both talks to the young audience and reminds us older folks of the songwriting craft that Blossoms possess in spades. 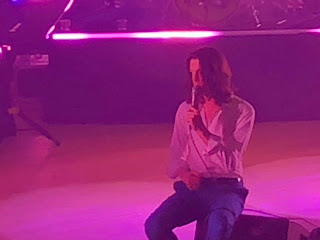 Deep Grass and Between The Eyes allow Josh to take centre stage, accompanied by his partner-in-crime and Blossoms touring member Charles, and let loose on the guitar, a much-underused weapon in their most recent past. The latter merges into an instrumental section of Blue Monday with Myles and Joe taking over. They finish the main set with just Tom on stage and him conducting the crowd in singing first My Favourite Room then sections of Babybird’s You’re Gorgeous then Oasis’ Half The World Away, songs released before some of the audience were even born, but which now have been made like old friends to this audience.

There’s a huge booming intro to a soaring glorious Unfaithful and then Blossoms deliver a version of Let’s Dance that they both make true to the Bowie original as well as adding their own twenty first century twist to before finishing inevitably with Charlemagne which sends the floor into one heaving sweating mass of bouncing bodies.

This might have been an intimate warm-up for their Reading and Leeds Festival appearances this weekend, but, like all their shows, Blossoms treated this one as their most important, determined to have the crowd streaming out at the end buzzing and excited by what they’ve just witnessed. They might be reaching the end of the Cool Like You touring cycle but you don’t sense any weariness despite the impending excitement of revealing new material to the world.