The Murder Capital - When I Have Fears (alternative review) 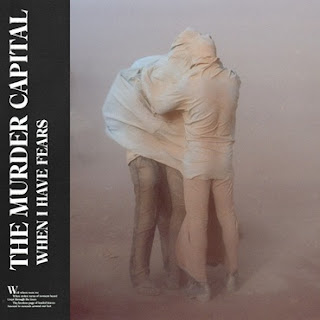 With the Irish music scene currently awash with great new bands it’s hard not to fall in love with the rapidly rising Dublin based quintet The Murder Capital and their brilliant debut album When I Have Fears. Jason Wynne takes another look at the record for us - as we couldn't agree who was going to write the review.

From drip feeding their music into the public domain and producing incredible live shows of the highest intensity they’ve made us all want to hear more, more, more and this album doesn’t disappoint as they seem to have replicated that live performance on record with legendary producer Flood.

The raw honesty prevalent in this record, the title inspired by the Keats sonnet of the same name, sums up what The Murder Capital are all about. They are open, committed, energetic and passionate individuals who, possessing a unique chemistry between themselves, have come together as one creating an unbreakable bond of love, hope and strength.

For Everything starts off as a slow burner with the eerie intro creating an air of anticipation before the tremors of Gabriel Paschal Blake’s bass build up a sense of molten lava bubbling up, waiting to erupt. The double pronged attack from Damien Tuit’s and Cathal Roper’s guitars accentuate this further as the landscape becomes even more uncertain. Diarmuid Brennan bludgeons the listener into submission with a brutal attack on the drums before the razor sharp James McGovern introduces himself..

“I am a blissless star corroded through the core” he chants

It’s shouty, it’s chaotic and it’s wonderful. There are so many layers to the song that it demands your attention from the off as if you rest on your laurels you’ll miss something in the finer detail and be forced to listen to it again and again and again.

“For Everything, For Nothing” refrains McGovern increasing the intensity, roaring out at high volume before bringing the song to a crashing end.

More Is Less is angsty and frenetic. As with most things The Murder Capital there’s an urgency to the song with its frantic pulsing bassline, thudding drums and screeching cut throat guitars.

“If I put my life in my back pocket you’d know well. That I kept all your belongings for the sweetness and the smell….and I love it”

There’s a punk like energy to this short, sharp, shock of a song as McGovern concludes with the battle cry “Give Me More”.

Green & Blue may well be their finest song to date. This is the song that appears to have won over even more new fans with its Chameleons-like sound. It’s huge, it’s epic. With the rolling drums and guitars chopping away there’s a sonic landscape enhanced further by a bassline that makes your bones rattle as it travels right through your body. James’ vocal, as always, is passionate. He cries out in desperation, in isolation…

“I went into a state inside of thought and wandering mind” he declares as the tension mounts, things appear to spiral out of control, it’s almost unbearable as you can feel the heaviness of loss in the vocal – tackling the most painful of issues - love and death.

The song closes to a cacophony of noise, musicians losing themselves in the moment, a sense of unity, community, pulling together as one making it one of the singles of the year.

Slow Dance Part 1 as the title suggests is less frantic although the intensity refuses to go away. Dark, like a dagger through the heart, the guitars sound like they are in pain squalling away painting a bleak picture of fragility, hopelessness, helplessness.

“Spoke to the oceans and the depths become my wealth. Nobody noticed but I’ve never been myself. I let it wash over my head “

There’s a sunken feeling, almost of resignation, as not for the first time on this record we experience the overwhelming humanity of the band as they take us to the depths of despair, to the bottom of the ocean.

Slow Dance Part 2 acts as the foil to Part 1. It’s a full on instrumental but it talks to you. The guitars trying to coax you back to the surface – an attempt at resuscitating life. You get the feeling it’s a fight between heart and mind, between mind, body and soul. The drums once in beat now becoming more frenetic and disjointed, lacking their usual control. The meandering bass taking its hold and dragging you, slowly, back to the bottom of the sea with the eerie violin almost certainly spelling the end.

This album is most definitely a story, a musical journey, and the songs blend perfectly into each other and James has said previously there’s a definite structure and deliberate order to the songs albeit on the record or when played live. The record explores death and the fear of it. There is also an element of romance within all the songs. Even in the songs that are darker the band try to visualise the potential romanticism and what could have been.

When the inevitably of losing something or someone you love finally hits you it hits hard, really hard. The senselessness of it all is difficult to comprehend but On Twisted Ground covers the grief perfectly. Keeping your friends close and knowing what matters is what this song is all about. The song, a stand out track when performed live, is beautiful but brutal too. It’s a difficult listen but it has to be heard, tackled head on, because people need to be aware that they are not alone and we should all look out for each other.

It also tackles the survivors who have lost and how they will never really get over their grief either. On record this song is just as extreme and hard hitting as the live version. The tears and the raw emotion are captured on record too.

As James reflects with a haunting vocal about a “horrid dream” and how “you could have watched it all” you feel what he’s going through. He’s aching, in pain and distraught. Losing his best friend by means of a “searing end into the abyss” James breathes heavier, gasping for air, you get a sense he’s sobbing his heart out. Vulnerable. Gone but never forgotten. Everything seems so final.

Feeling Fades is the anger, the energy, the release spewed out after the baring of the soul in the previous song. McGovern menacingly snaps “As the feeling fades away, the tearing streets create a wave, of never seeing stills in time”. Their debut track is incendiary and there’s fire in the belly as James comes out fighting. It’s gritty, it’s desperate and in your face. The bass snaps at you, the guitars snarl at you and there’s no respite from the barrage of beating drums and the repeated lyric “the now elapsed ‘round you and me, and it kept us all together”.

Togetherness is very much the ethos of this band and the climax of the song culminates in a fraught, frantic McGovern screaming and seething to the point of reckless abandon as the rest of the band oversee, watching his back. Together as one, always.

Grief is a theme that accompanies the band throughout the whole album and Don’t Cling To Life is two and half minutes of urgency and is surprisingly buoyant in terms of the beat with the guitars almost kaleidoscopic in colour and sound. The words, emotive as ever, remind us…”All your chances gone awry”.

Dealing with the only two certainties in life – life and death - the impassioned plea “Don’t Cling to life, there’s nothing on the other side” is anthemic giving off a feeling of euphoria – a celebration of life. Through the grief there’s something comforting in this song. Darkness cannot drive out the darkness, only light can do that so further cementing The Murder Capital’s position as one of the most vital bands out there right now. A band not afraid to the confront the issues that matter on head on.

How The Streets Adore Me Now shows a diversity to the band. The maudlin piano intro sets up a gut-wrenching, heart-breaking lullaby. James whispers, inaudible in bits, with his deep voice and heavy heart he cries

“I know I should have stayed with you that day, Your eyes wrapped round me still”

He appears to be carrying a massive weight on his shoulders, in reflective, pensive mood. Everything feels claustrophobic and as the flame of life flickers more intensely he concludes the song by whispering “My love, my light, my darkness”

Love Love Love brings this emotional album to a dramatic conclusion. The wailing guitars are raging and melodramatic yet this music of great sadness is full of compassion too.

“In the room where it took place, in the rain the romance lay” strains McGovern consumed with more desperation and desolation. At first it sounds like a peaceful reverie before descending into something more sinister as the “Love Love Love” calls get bolder in their cry.

“As the storm begets the eye, You find time to cry as I say goodbye” before his parting shot “well goodbye, goodbye”. The end of the story with no happy ending. You can almost sense the relief, that cathartic feeling of getting things off your chest when you have fears.

From the glowing reviews the band have received both for their live shows and single releases it’s looking they are poised perfectly for the next level. With the impending release of When I Have Fears, and added exposure/hype, one hopes The Murder Capital can keep their feet on the ground and avoid the pitfalls and trappings where other bands have fallen.

Their overwhelming empathy, refreshingly honest approach and social awareness will stand them in good stead and, more importantly, their connection with people of all ages during these difficult emotional and economic times will surely guide them down the right path. It’s safe to say this album is what the music industry and the public needs to hear right now.

Our first review of the album can be found here.