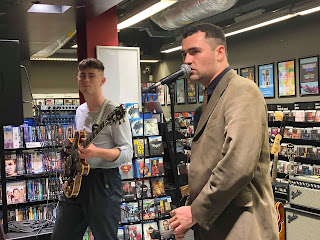 The Murder Capital's promotional tour for their debut album When I Have Fears continued with an in-store at Manchester's recently reopened Fopp store. Without the protection of the traditional boundaries of a gig venue, they showed exactly why they excite and reinvigorate so many music lovers.

The old footballing question goes "can they do it on a wet Wednesday night in Stoke?" - the musical equivalent must be whether they can do it on a wet Tuesday night in the basement of a FOPP store in Manchester surrounded by DVDs and cheap Prince cds. The jury might be out on Messi, but it isn't on The Murder Capital as they performed a six-song set to match the intensity of their live performances in proper gig venues and then charmed the life out of every single person that queued up to get anything signed afterwards.

As the crowd gather for the in-store at the unsavoury time of 5pm when we all make our excuses and leave work early (or on time in my case as I got in an hour earlier specifically not to miss this), James wanders round the store, totally focused on the performance to come, steely-eyed like a man on a mission. The first time we saw them we were perturbed by this, but now it's part of the ritual, the preparation for a performance where everything is laid out on the line, emotions in their rawest form thrown out there for everyone to observe, consider, relate to their own life and circumstances and to celebrate the mere fact that survival these days is an achievement.

Gone is the shield of dark lights, of an audience's senses dulled by alcohol and the protection that a stage separated from the floor affords a band.  Tonight we're all in the bright lights, audience and band, because a Murder Capital show requires both sides to participate in the baring of souls, the expulsion of demons and the exhilaration of coming out on the other sides where others have fallen on the way. Whether you are sixteen or forty-eight, The Murder Capital are the band that right now broach the hardest subjects in the world - the pain of loss, the strength you need to open yourself up to others and reveal your inner feelings - but which attain the greatest prizes there are - love, friendship and the realisation that you are not alone in the world.

The six song set flies by in the blink of an eye, and our eyes are shut for most of the set, taking us out of the bright lights and transcending into the dark world that these songs inhabit. Every time we hear these songs live though they sound different, because they are, the intuitive connection between the five brothers in arms allowing each performance to be unique rather than a parrot-fashion rendition of the recorded versions. There's connections between one band member and another, sometimes driven by a gut feel of one to another, sometimes a chance catching of the eye that leads to a deeper connection.

They play six songs from When I Have Fears, starting with album opener For Everything in a drench of pedal feedback before celebrating death with Don't Cling To Life, slowing things down with Slow Dance 1 ("track 4 as James calls it) and the instrumental Slow Dance 2, before delivering a final blow with a seven-minute Green And Blue where they spread their musical wings still further and then a bleak dark Love Love Love that's so painfully mournful that it challenges you not to close your eyes and shed tears.  Where other bands trade in simple hooks and glib banal statements, The Murder Capital take you right to the edge, question their and your very existence and leave you exhausted yet ecstatic at having plunged the depths and come out breathing and more alive than ever before.

The signing is telling too. They want to know your name, your craic and what is going on with you in a way other bands simply don't recognise as important. Connections between band and audience are a two-way thing where one fuels the other and the two become one.

The disposable nature of the world today might mean that life-changing generation-defining bands might be a thing of the past, but here we have a band that is the cure for most of society's ills - friendship to share the best moments, a shoulder to cry on when things are hard, hearts and minds connected and operating as one and a reminder that music is like oxygen to so many of us.