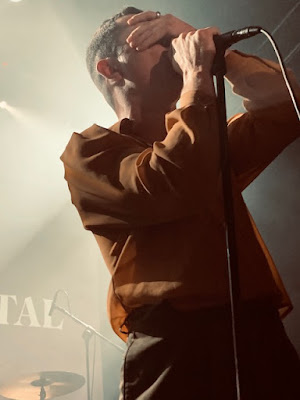 The sold-out signs were up and The Murder Capital swaggered into a hometown show of sorts for the launch of their debut album When I Have Fears and thrilled the 550 capacity Button Factory audience with a performance that will last in the memory forever and ever.

The rise and rise of the quintet continues and this juggernaut is showing no signs of stopping especially now the remarkable When I Have Fears has been unleashed on the general public. Incendiary live performances like this are only going to further increase their reputation as music’s hottest ticket right now. They take to the stage to deafening roars and the lads, at first grinning from ear to ear at the boisterous crowd, put on their serious faces as they mean business from the outset.

“I am a blissless star, corroded through the core” exclaims James with a menacing look as he eyeballs the crowd with those piercing eyes. The guitars are frantic, frenetic and loud. The drums are even louder. It’s deafening and the guitars screech and squall bouncing off all four walls as well as floor and roof. James has us under his spell repeating the “for everything, for nothing" cry with more passion, more intensity with each and every shout until the song comes to a breathtaking halt. The din from the crowd is incredible as the frenzied, manic audience, packed to the rafters, make the building’s foundations shake. The band are visibly stunned by the feverish reaction.

Barely catching breath the band hurtle into More Is Less and it beats you into submission immediately. The blue touch paper is lit. They probe, they prompt and they challenge at every possible opportunity.

“If I gave you what you wanted, You’d never be full” bellows James and we love it. Cathal, Damien and Gabriel poking and prodding us with their guitars and goading us into a reaction. The ever impressive Diarmuid pummelling the drum kit until it’s black and blue. The whole band giving every last drop to the cause but we want more. “And you want more” screams James. “Give me more”.
We’re already on our knees two songs in yet the relentless intense nature of this band means they refuse to let you settle into a comfort zone.

Love is an important thing to this band and with Love, Love, Love we’re reminded that those we hold close should always be held so. “In the rain the romance lay, My heart stood still” mourns James McGovern telling us “Nobody knows where the ashes go”. The song still manages to uplift though and the harsh brutality of the song reminds us that love is a precious thing not to be taken lightly.

The band continue to push and press taking us on their personal journey and this spellbinding journey takes us down the winding, undulating path of Slow Dance Part 1 and 2. As we catch our breath it’s left to James and the lads to take our breath away again. They have this habit of making you feel like you’re the only person in the room such is the intimacy and the deep emotion aimed at you. Part 1 has this claustrophobic feeling which is unsettling but this is what they want. It’s thought provoking and demands a reaction. “Nobody noticed, But I’ve never been myself” James tells us. He prowls the stage before withdrawing and leaving the band jam the instrumental Part 2. The cacophony of noise created draws us all closer, together in unity. Diarmuid, Gabriel, Damien and Cathal bouncing off each other, complimenting each other with the twists and turns of the music. Taking us higher, then to the depths before rising again with rampaging guitars and drums. 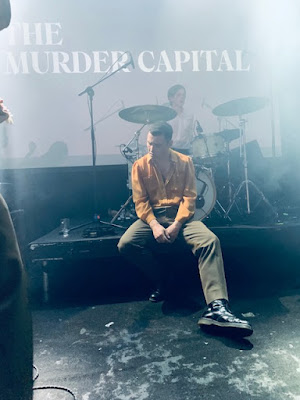 James reappears and holds the microphone lead tightly in clenched fist as he introduces tearjerker On Twisted Ground. With every performance this song gets better. The beautifully strummed bass line offers the emotional crutch to James and helps carry him through an emotionally charged performance.

It’s such a brave performance from an incredibly courageous young man pouring his heart and soul out tackling the loss of his best friend. The crowd are still, silent and totally engaged.

There are tears everywhere as James ponders ruefully “Oh my dearest friend, how it came to this, With your searing end into the abyss” before his breathing gets heavier and heavier. The emotional release is draining and with hugs from band members and the biggest cheer of the night from an emotional crowd you can sense that James is touched by the love and empathy. It’s a two way thing as the outpouring of grief and love from both sides carries us all through.

And when you wonder how they could possibly follow such a beautiful song with anything else worthy they give us Green & Blue. They take us on a journey with Diarmuid, the heart beat of the band, leading us down an uncertain road of twists and turns ably assisted by the magnificent rumbling bass of Gabriel - energetic as ever. Damien and Cathal attack from all angles and we don’t know where this is going. There’s darkness and light, happiness and sadness, rage and calmness all blended into one song. Upping the tempo and slowing it right back down again and all accompanied by the brooding vocal of James as he ruminates and contemplates luring us back “into a state inside, Of thought and wandering mind”. The crowd sing back the chorus in unison “I’ll correlate the blue, The green and blue, The green for you”. This feels special, it is special. Life affirming moments that you’ll never forget where every single person in that room is living and breathing the band. It just feels like there’s a unique bond between band and fan with the extra sense that something really big is happening for the boys.

As for many of the shows Don’t Cling To Life starts with the cry it’s “a celebration of death” and as the band rampage through the song “The world collapses around my room” the majority have no option but to dance, and to cry. The band are flat out, going full tilt refusing to slow down and it’s relentless - just like their touring schedule right now. Their zest and passion for their art and craft is here for all to see. It means everything to them, it means everything to those in the room and beyond. There’s nothing on the other side.

The raw passion of this band, who I’ve often described as brutal but beautiful, reaches its dramatic climax with a murderous and brutal version of Feeling Fades which culminates in Gabriel standing ten foot in the air above the speakers and James held aloft by the masses getting passed along the crowd safely handled showing the trust between band and crowd. We have their backs, they have ours and it keeps us all together. “The now elapsed ‘round you and me, And it kept us all together”. Together.

As James frantically starts screaming “La la la la la la” he launches himself into the crowd and the band crank it up to another level with a cacophony of noise and that infamous wall of sound. There’s a mass of heaving, sweaty bodies on their last legs and as the final song comes to a crashing end we’re all a little punch-drunk. Believers of the unbelievable. Euphoric is an understatement. Some try to comprehend what actually just happened, strangers embrace and in unison we applaud a very special band who can become anything they want to such is their talent.

Many have sneered at such a sweeping statement but I believe we have an early contender for the Mercury Prize 2020 and their live show most definitely should not be missed. We don’t know how long they’ll continue to play these intimate surroundings as momentum builds with this band but, like many, we’re trying to catch them as much as possible and keep collecting those memories. Nothing lasts forever....unless they’re memories of a Murder Capital show.