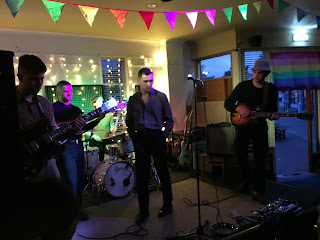 After a busy weekend, playing to sell out crowds in Dublin, and promoting debut album When I Have Fears with record store shows across Ireland, The Murder Capital played a mesmerising thirty-minute set to an enthralled Glasgow audience. Stuart Ralston popped home for a few hours to witness James, Damien, Cathal, Gabriel and Diarmuid deliver an emotive, uplifting and stunning set.

Mono is a Glasgow institution – a pub, record shop, vegan restaurant and venue in one.  Although I'm a regular visitor when I am in Glasgow, I've never seen a band here. Describing The Murder Capital as a band though is doing them a disservice; musicians, composers, artists, poets are far more apt descriptions.

As their roadie sets the feedback pulsating through their amps, the band take to the stage. Diarmuid Brennan's drums come pounding in and album opener, a blistering For Everything, assaults our senses. At the sides of the stage, guitarists Damien and Cathal conjure up sonic soundscapes set against James McGovern's commanding, impassioned and thought provoking lyrics. An incredible opening.

The pace is slowed down by Slow Dance part 1, yet the atmosphere is no less intense. Slow Dance part 2 allows James to take a breather. By this time, the audience are almost stunned into silence. James breaks that by thanking the audience for coming and saying “it's cool for us, we are not sure what's going on” to outbreaks of laughter before introducing a song about his friends. On Twisted Ground might just be the greatest song ever written. Built around Gabriel's bass line, James pours his heart out about his friend who took his own life. It's impossible not to be moved. From the darkest and saddest of times, The Murder Capital have created a lament of incredible beauty. Throughout, the audience are fixated, such is the power the band manage to create with their songs. Again, calling them songs is doing them a disservice for they are so much more than that. They are works of art.

Diarmuid's swirling, hypnotic drums whip Green and Blue into action. He's clearly the finest drummer of his generation. The Murder Capital have the most formidable rhythm section. Gabriel's bass lines are once again at the forefront, driving the music along whilst around them Damien and Cathal produce the most beautiful sounds. It's difficult to describe their approach to guitar playing – they don't play melodies, chords, or soaring solos. Instead, they create soundscapes which either echo James' vocal lines or feed off Gabriel's bass lines. There's a understated confidence in the band.

To produce music of this intensity is incredible given they have only been around for little over a year. As the guitars fall silent, Green and Blue ends as it begins, with the rhythm section. It gets a huge response from the crowd before James concludes “so, the record is yours now, and this is how it ends” and with that, the band launch into final song of the thirty minute set, Love, Love, Love. Another emotive, cathartic, mournful song yet it is somehow uplifting. And there, I believe, is why we have been drawn to The Murder Capital and will tell everyone around us how good they are. There's an incredible honesty in their lyrics, their music is uplifting and challenging, they are amazing musicians and the chemistry and love they share for each other is evident. It's difficult to know who to watch on stage as each member contributes something to the mix; no one plays bass like Gabriel. His style is enthralling. Yet we don't want to take our eyes off James and out the back Diarmuid is doing his thing.  In addition, Cathul and Damien take songs off at tangents.

Their music resonates with us like few bands have ever done before.