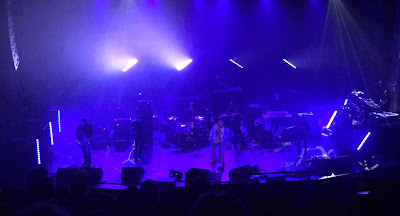 James crossed back into Canada last week as part of their North American tour for a seated show at Vancouver's Orpheum Theatre which allowed them to experiment with the setlist as they have been doing across this set of dates.  Our friend Celia caught the show and reported back for us.

It's a good evening in Vancouver. Warm, and still bright and James are playing tonight with the Psychedelic Furs and Dear Boy at the Orpheum.

The Orpheum is a grand old gal, a classic movie and vaudeville theatre that opened in 1927 and still has a working (and registered!) Wurlitzer organ. It’s a shame that James keyboardist Mark Hunter didn’t get a chance to give the Wurlitzer a go during tonight’s set. The Orpheum is a venue from an older time when local citizens enjoyed structured entertainment. That's not what they were getting tonight.

Dear Boy started off the evening with their typical explosive energy and charisma and wowed the crowd. Dear Boy frontman Ben's hair got a particular shout out and overall the band made new and enthusiastic fans with their tight musicianship and solid tunes.

James opened with multi-instrumentalist Saul Davies’ comment that “tonight is the concert that ten years from now you will be able to say you were there”. The band then launched into their varied but well hewn high energy set, providing ready proof to Saul’s words. A standout song for me tonight was the success of Play Dead off the Whiplash album, with its many moving parts. The band had started to play this for the first time on this tour a few gigs back in Royal Oak but something f***ed up, which led to the usual cheeky excuse of Getting Away With It All Messed Up, and the abandonment of the uncompleted song. Tonight, however, it all comes together and is a particular success with all the moving parts working in harmony and the exquisite a cappella close to the piece is very moving.

Walk Like You is deep and powerful, with Chloe Alper's flawless harmonies augmenting Andy Diagram's soaring trumpet. The band plays two particularly impressive songs, which Tim describes as "songs of grief and sadness": All I'm Saying and How Hard the Day and the audience is respectful and appreciative.

That appreciation comes back to Vancouver with Many Faces, which Saul notes “could be a song about Canada”, a nod to our mostly successful nationwide implementation and adherence to multiculturalism through the decades. Tim retorts that the song is "an ode to Trump" but I rather see the song as a rebuke to the Cheeto in Chief and his divisive politics.

Come Home - the traditional crowd pleaser - does not disappoint.

The poignant vocals and keyboards of Attention are close to perfect and it's a pleasure to see fellow James members like multi-instrumentalist Adrian Oxaal, keyboard master Mark Hunter and Chloe have a particular opportunity to showcase their talents. Whilst I hand out accolades, its only right that I mention that through the night James' tight rhythm section of bassist Jim Glennie and drummer/ percussionist David Baynton-Power do what they always do which is expertly and passionately propel the band forward and keep them on track.

It's rather a shame that the staid traditional venue is not one that lends itself to the usual type of interaction with the audience that the band favours. Tim makes a couple of forays into the audience but is somewhat thwarted by the seats right up to the stage and compensates with extra dancing onstage.

And speaking of dancing, during the set closer Getting Away With It (All Messed Up) Tim is joined on stage by an older chin-braided geezer in a straw pork pie hat who dances up a storm. The dam has been breached and soon a multi-generational and multi-gender crowd is up on stage dancing up a storm (I was going to say dancing to beat the band but that's a pun beneath even me). As the tune finishes, Tim reminds the crowd that 'it only takes one person to break through and make change', and as we think about Greta Thunberg [the 16 year old Swedish climate change activist] and other new leaders, it is a good thought for all of us to take home and ponder before we start our new tomorrows.

Needing to catch a flight prevented me staying for the Furs, but judging by the energy around my balcony seat, the crowd was pumped and the Furs no doubt delivered their solid musical offerings to a very appreciative crowd. For myself, I can only say "Thanks, James”. Loved every minute of it. And a la prochaine!