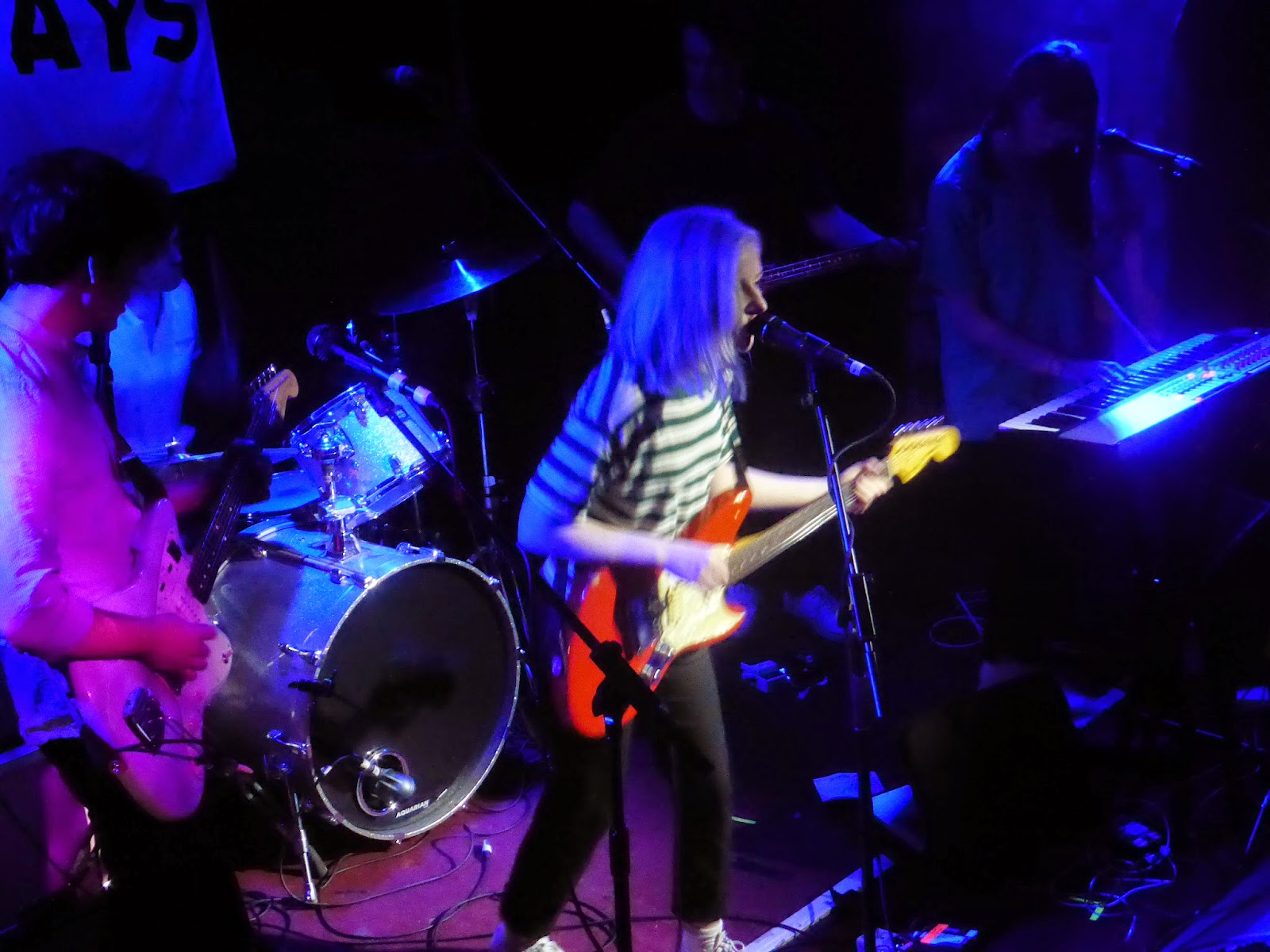 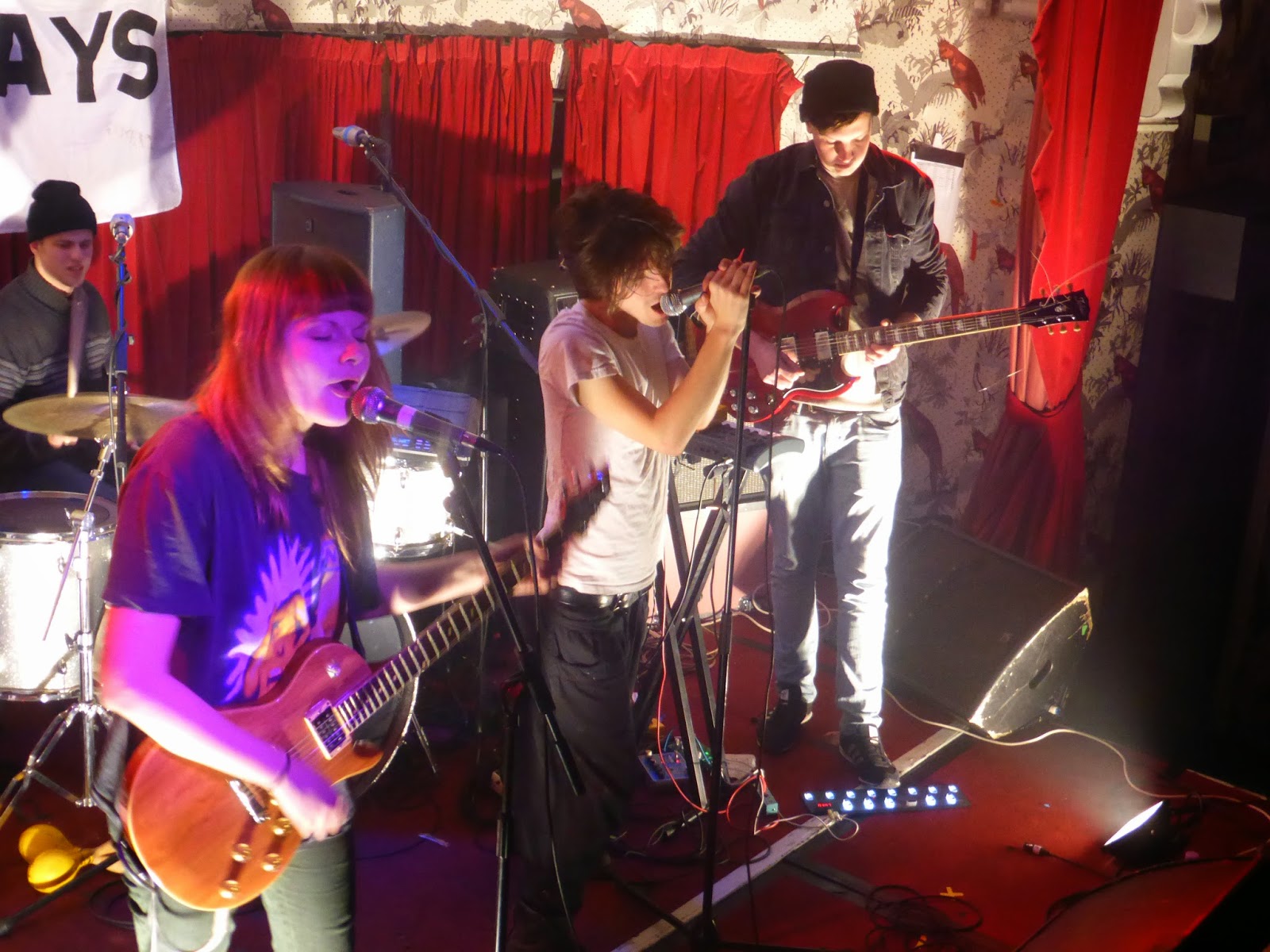 Alvvays' self-titled debut album gathered the Toronto collective a raft of admirers with its summery sweet disposition.  We went along to their sold out months ago gig at the Deaf Institute in Manchester to see if they could recreate the magic of the record in the live environment. They more than delivered. Support came from fellow Torontonians Moon King.

Opening up the evening's proceedings are Moon King. Their core is Daniel Benjamin and Maddy White and they share vocal duties in their set and for the tour they're accompanied by another guitarist and a drummer. Visually Daniel grabs all the attention, full of dramatic posturing, lost in the music, living out those songs, whilst Maddy, when not singing, puts her head down and rocks out. It's an interesting contrast, but one that works brilliantly. 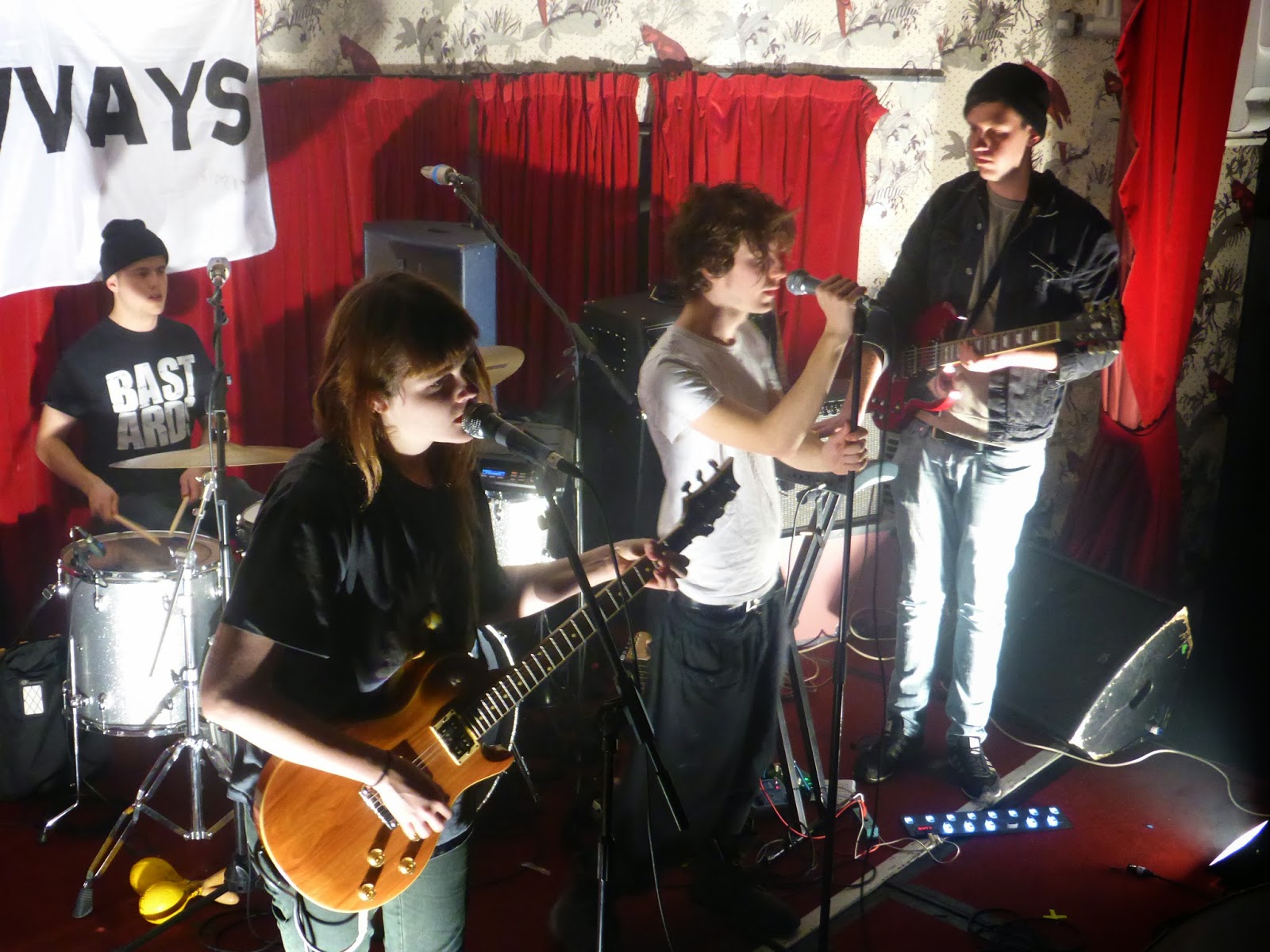 Their music sounds great too, loud and crunchy dual guitars, drums that aren't afraid to make themselves heard and make the guitars work harder. The visual contrast is also reflected in their vocal styles - Daniel's art-house vocals to Maddy's deeper more gutteral riot-girl tones. They play a mix of songs from their 2013 compilation Obsessions as well as tracks from their forthcoming record Secret Life including the title track and set-closer Roswell. We were mightily impressed and they're supporting on the rest of this tour, so you should get down and catch them if you're going to any of the shows. 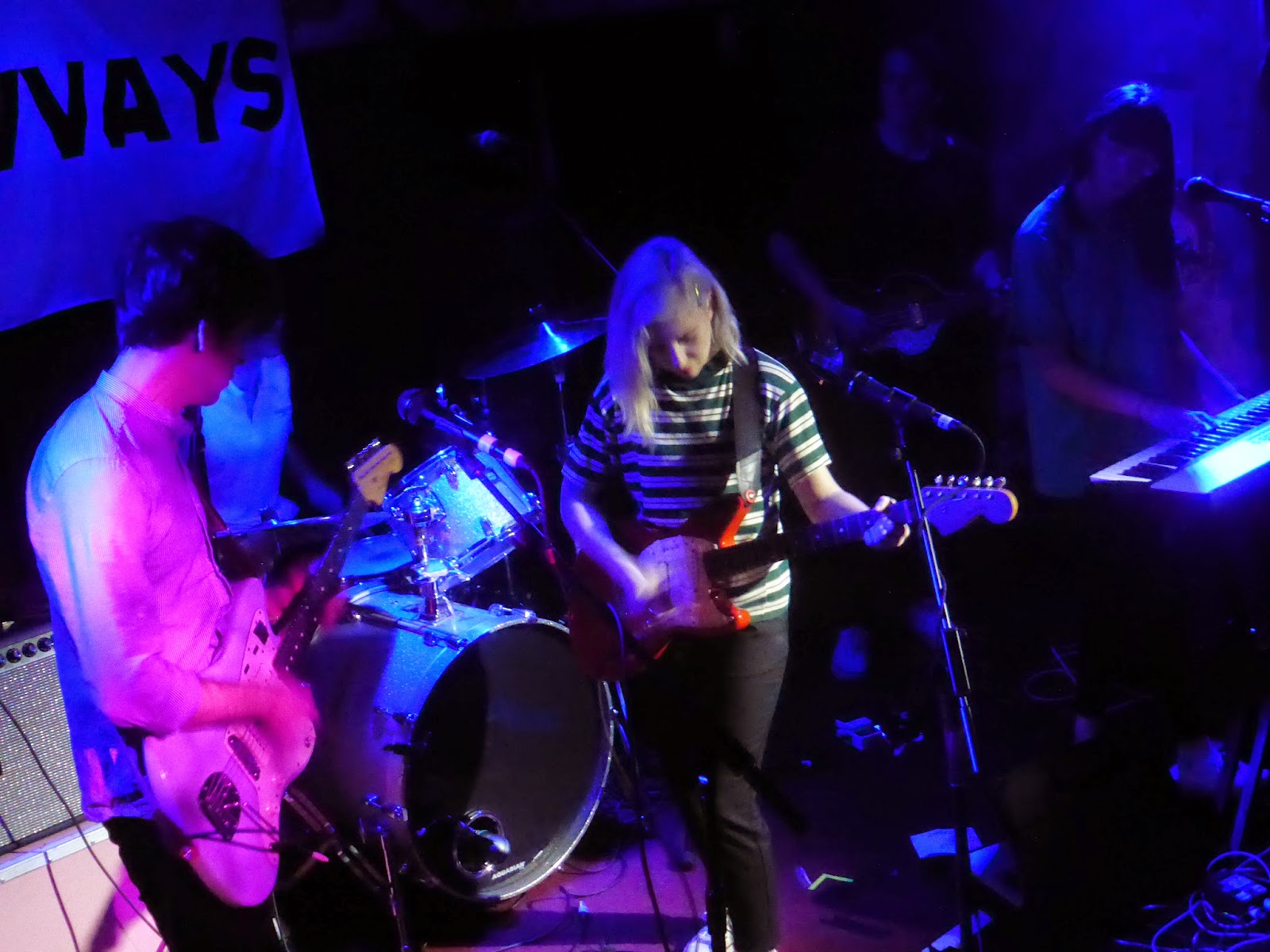 So to Alvvays and how would they sound? Their live sound is a lot harder and more raw than the record, but it feels like the edges have been roughed up rather than been blasted away. That gorgeous feel-good vibe that exudes from every track on it is still there, it just feels like the vibe has got to the end of a long, hard party and the mood is a little darker, but still full of fun. Looking round the crowd, everyone is singing along, from the teenage girls to the ubiquitous Manchester hipster with his beard and checked shirt to the wannabe WAGS with their fake tans. Alvvays have that certain something that bands only come along with every so often.

Up on stage, singer Molly is the centre of attention. She reminds me of Tanya Donelly circa 1993 when Belly were first starting up. It's not just her voice, it's her whole demeanour, engaging with the crowd and, like the rest of the band, taken aback by the response they get.

Bands do the whole they're glad to be somewhere routine, but she genuinely means it and it's that endearing honesty and exuberance that flows through their music. That applies equally whether it's the eight songs they play from their self-titled debut, the fact that they play a Deerhunter cover, but it's a b-side called Nosebleed, that they nod heavily to their influences with a cover of The Primitives Out Of Reach which closes their set and the fact they've come prepared with new songs - including the quite wonderful Haircut and the two-minute fuzz of non-album track Your Type - instead of short-changing the audience with a support slot length set. Archie, Marry Me is the song that's risen their profile here in such a short space of time, but tonight it sits quietly and unassumingly in the set as opener The Agency Group and the delicious Ones Who Love You in particular take centre stage. 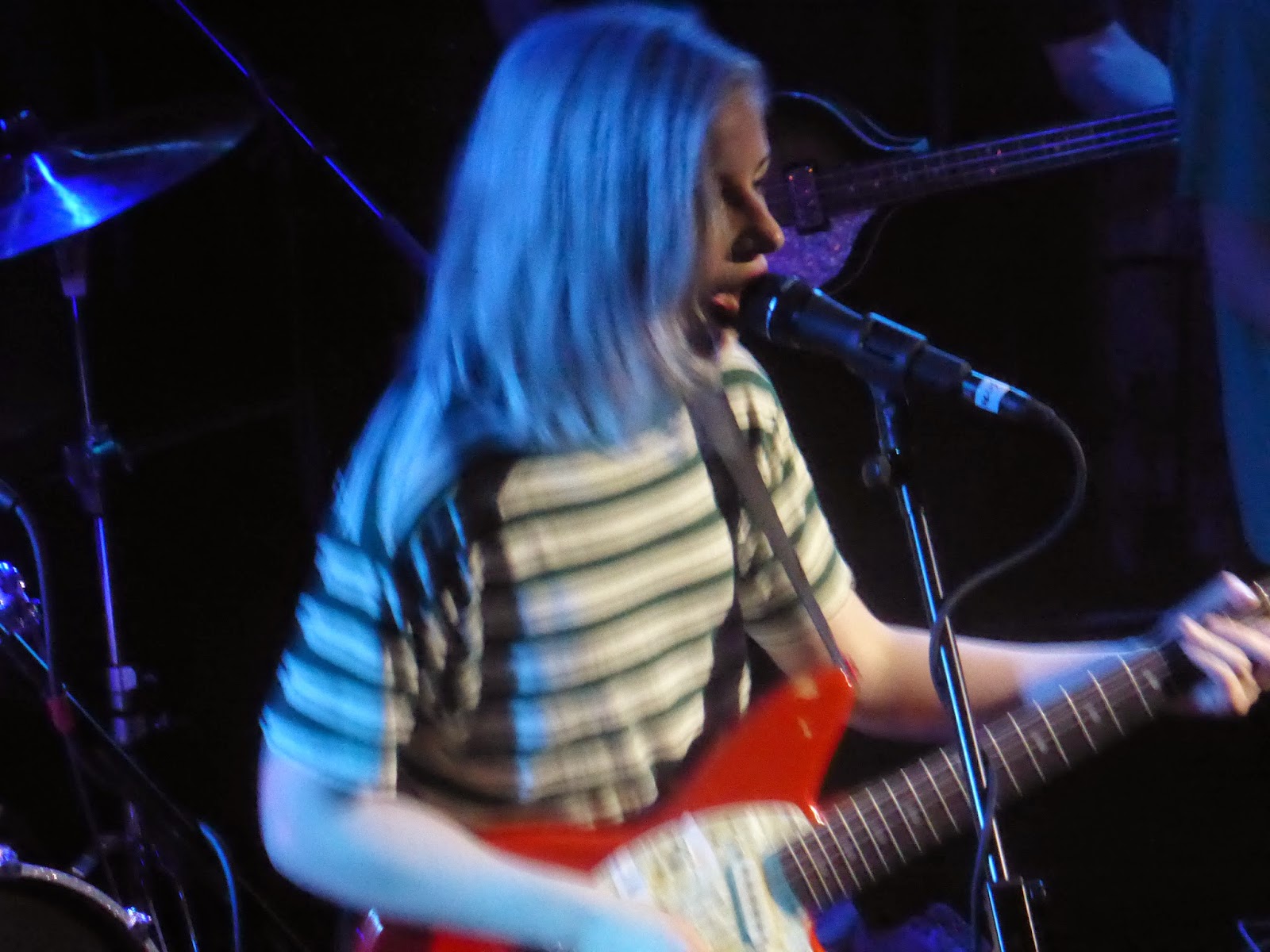 They've got a formidable live band set-up as well. Too many bands can hide in the trickery of a studio and not replicate it live, but Alvvays (and Molly tells us it's pronounced Always to end that debate) leave us with no such concerns. The twin guitar approach as well as bass gives the songs a robustness that they'll need in the bigger venues they're about to be catapulted into, whilst the keys add to the subtler moments of the set. They look and feel together as a band and by the end of the night as the girls chat excitedly to anyone and everyone at the merchandise stand, another four hundred people have fallen under their spell.

Alvvays' website can be found here where their remaining tour dates can be found as well as details of September shows in London and Manchester. They are also on Facebook and Twitter.