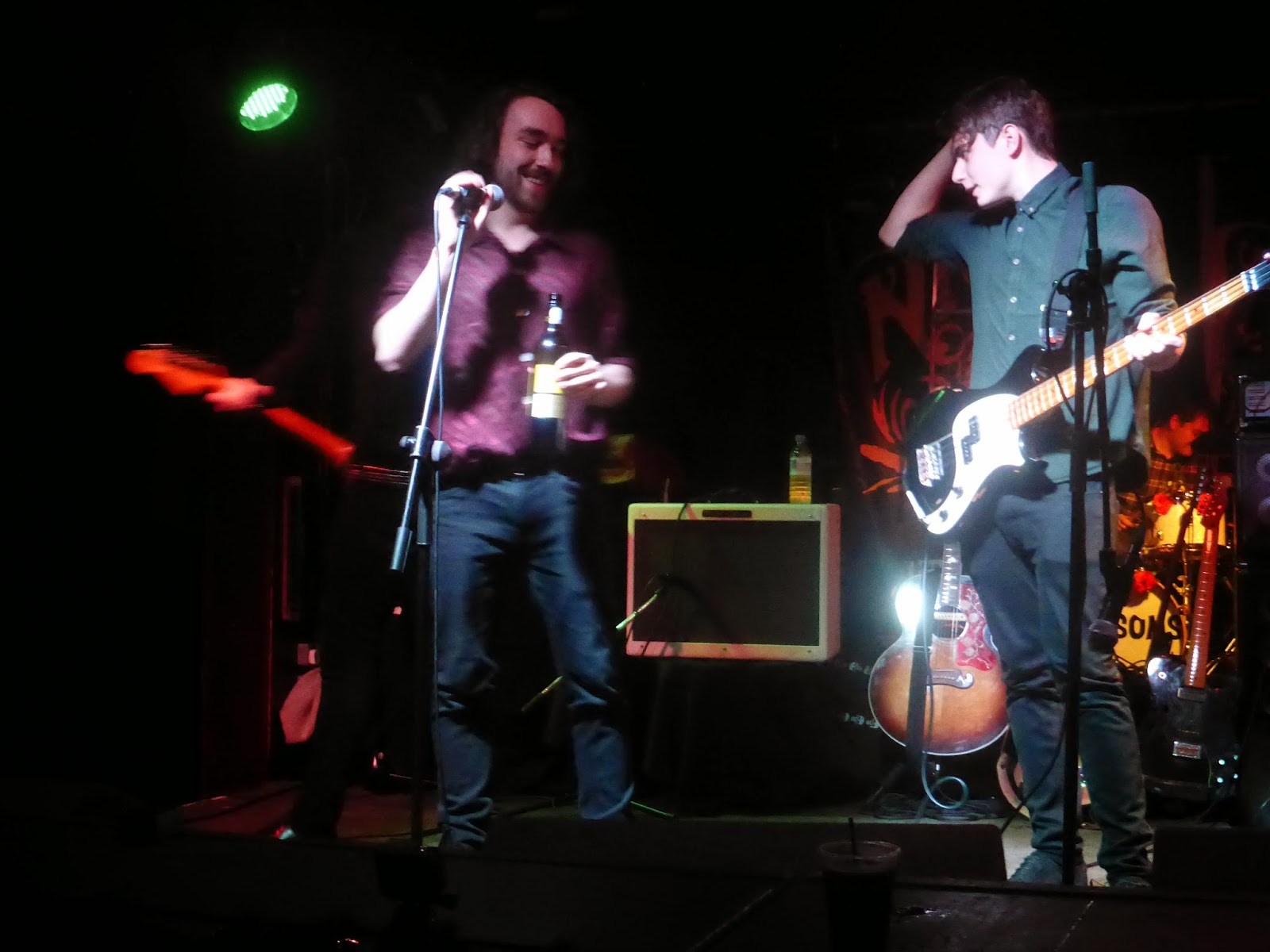 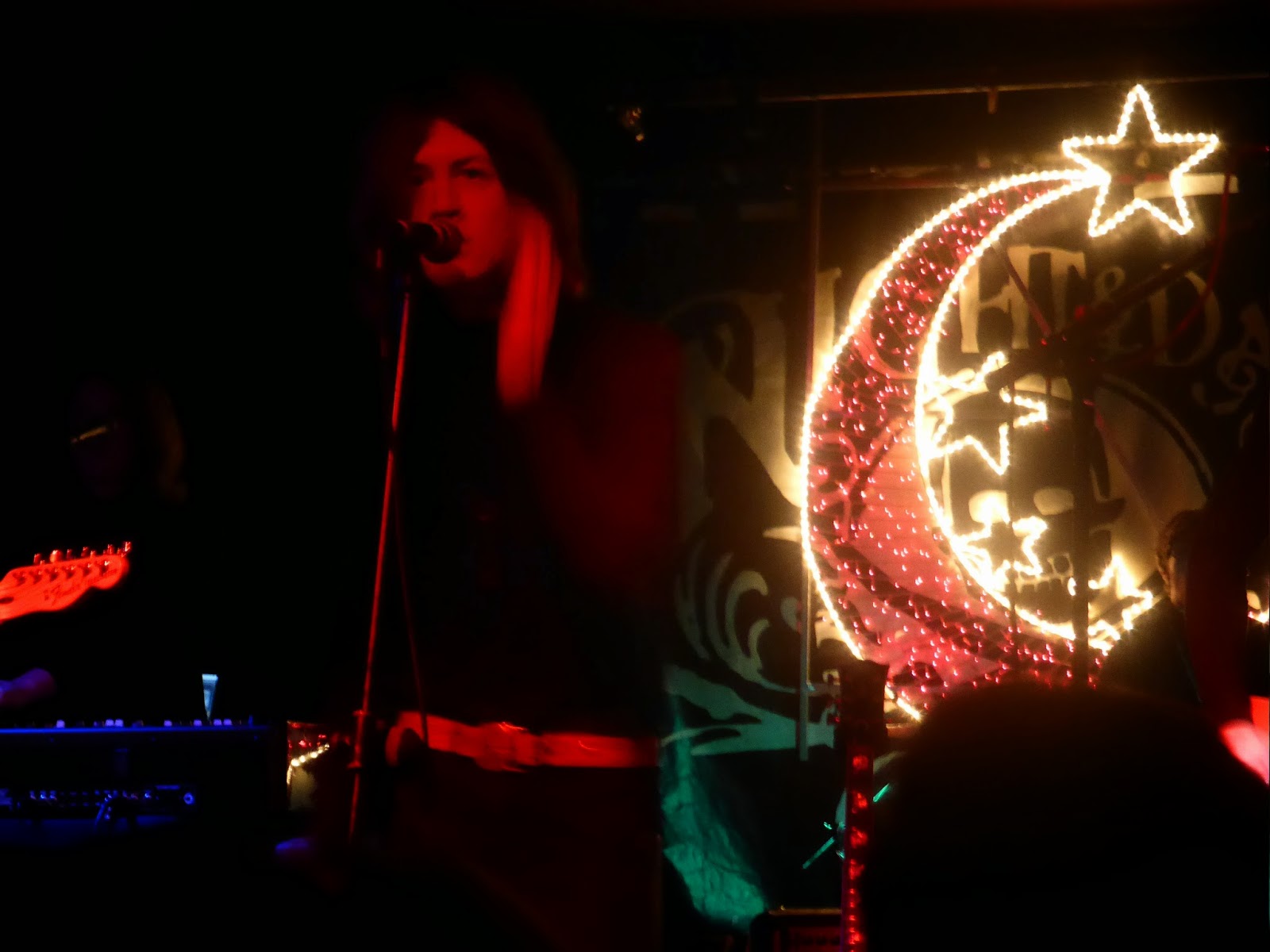 Two of our tips for 2015 playing a show just round the corner on New Year's Eve was too good to turn down. Whilst they made strange bedfellows for a gig, both bands cemented the feeling that 2015 will be a year in which they both find wider audiences for their very different styles.

We tweeted from the show about Hartheim - "pissed, dark and pouring wine on their head" and they were a peculiar choice for this evening's events. Their name, for starters, comes from an Austrian concentration camp and their songs are far from the happy sing-along songs you'd associate with the traditions of evening and the mood of the crowd. But you sense that Hartheim thrive in that environment, they don't make concessions to try and win people over, although there is an attempt at the first line of Auld Lang Syne so off the wall that most of the crowd don't recognise it. 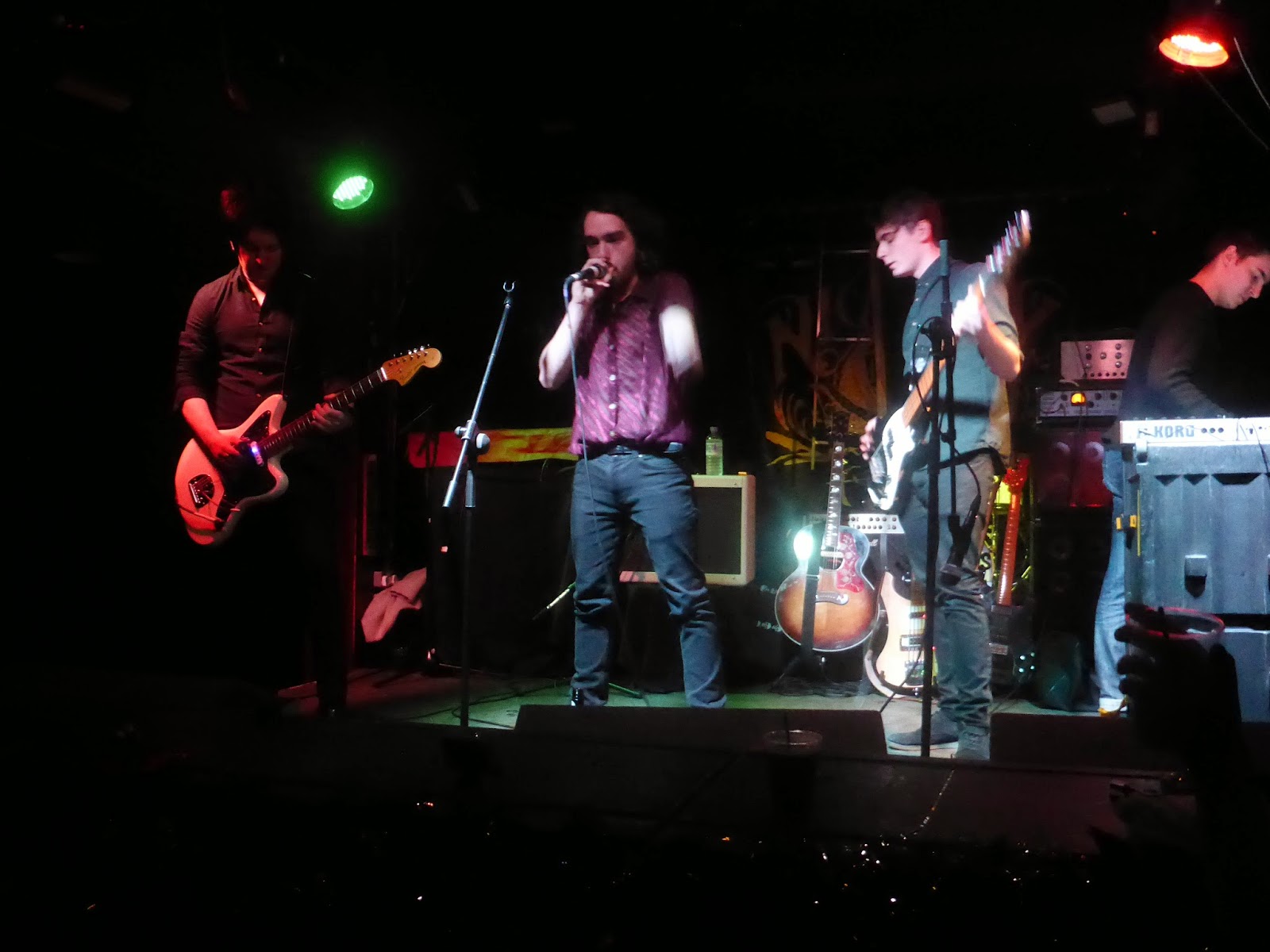 Their songs throughout are imbued with a sense of drama and intrigue (or melancholic bullshit as they call it), a sense of other worldliness, a manic whirlpool of pummeling drums, chiming guitars building menacingly whilst front man Mike, bottle of red in hand, preaches his message, imploring us to "rain on down" in one song and questioning the essence of religion, Catholicism in particular, in another "is the father the son" and in their debut single Yellow where he declares "your God has so much to answer for".

Mike introduces them as Partyheim at the end of the first song, but it's a pretty fucked up party they've invited us to. He tells us they've tried to write happy songs, but they can't and people who enjoy happy songs are the sort of people who enjoy public transport. Their set finishes with him pouring the remainder of the red wine from the bottle over his head so it runs down his face like he's crying tears of blood. The young hip crowd that Blossoms have brought with them don't quite know what to make of it (although they have their own crowd down the front enraptured) or them so they'll probably see tonight as mission accomplished. 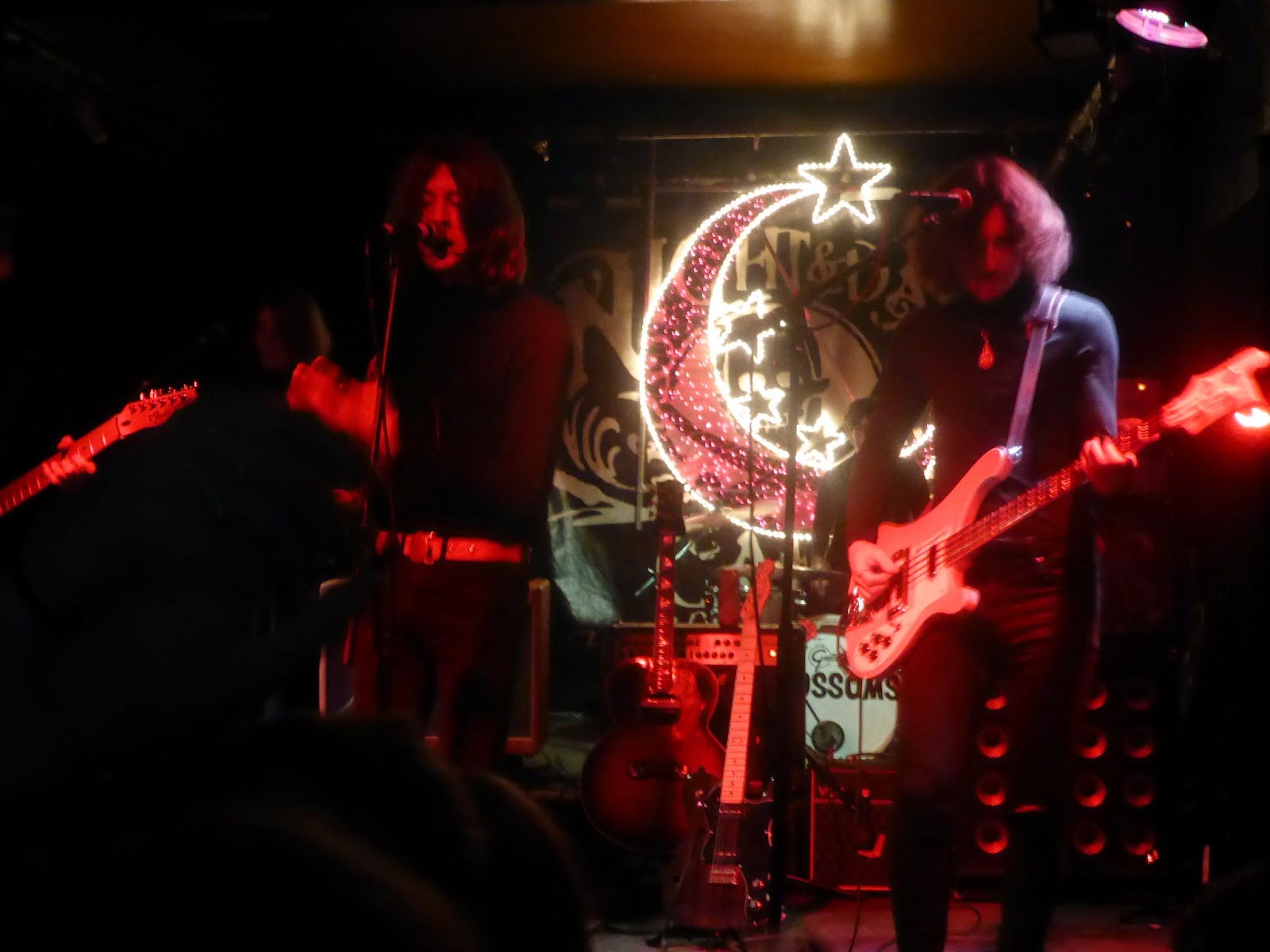 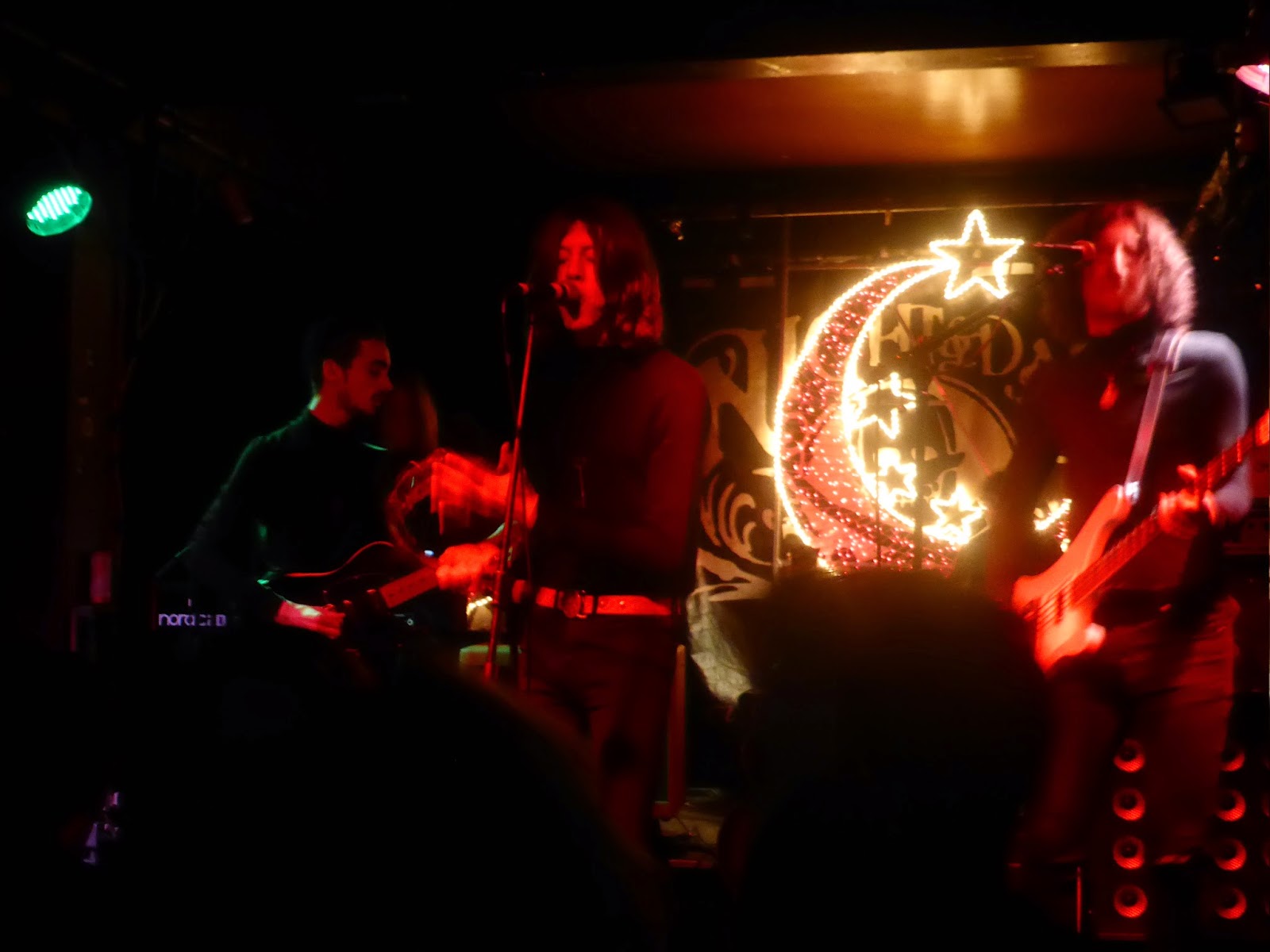 This is actually the first Blossoms' headline set we've seen for a while given that they've been out on the road with Courteeners, James and Inspiral Carpets for most of the winter, and it's clear tonight that they feel more relaxed and comfortable with their own audience, they let go of the reins a little and consequently sound looser and more fluid than they did in those support slots. It's at this point you see the chemistry and gang mentality of the band, as represented in their all-black attire, that's going to glue them together on their inevitable rise in 2015.

Their audience love them too, there's already an audience singalong of the instrumental section in opening song You Pulled A Gun On Me, there's banter between friends in the pit and the band on stage and set closer Blow ends up in a call and response sing-along between front man Tom and the audience, who have perched on every possible chair or table to get a better view. Cut Me And I'll Bleed, the next single, has the classic early Charlatans / Doors vibe thanks to Myles Kellock's organ work, but like so much of their set, it's them wearing influences on their sleeves rather than copying their idols and that looseness, that ability to let go and improvise, will serve them well.

The songs they have already will form the basis of the debut album and there isn't a weak one amongst them from the psychedelic hues of Smoke, the acoustic strum of My Favourite Room and the full-on blow out of debut single Blow, there's plenty of variety in there too. The ten-track set is cut by two as we approach midnight and that imposed cut-off in their set, although no one is feeling short-changed as they lead the countdown to 2015 with everyone in the venue. We know we've witnessed a band we won't see in a venue this size in Manchester again.

Blossoms played You Pulled A Gun On Me, Cut Me And I'll Bleed, Lava, Scattered Rain, Smoke, Madeleine, My Favourite Room and Blow.

Hartheim have a tumblr page and are on Soundcloud and Twitter.