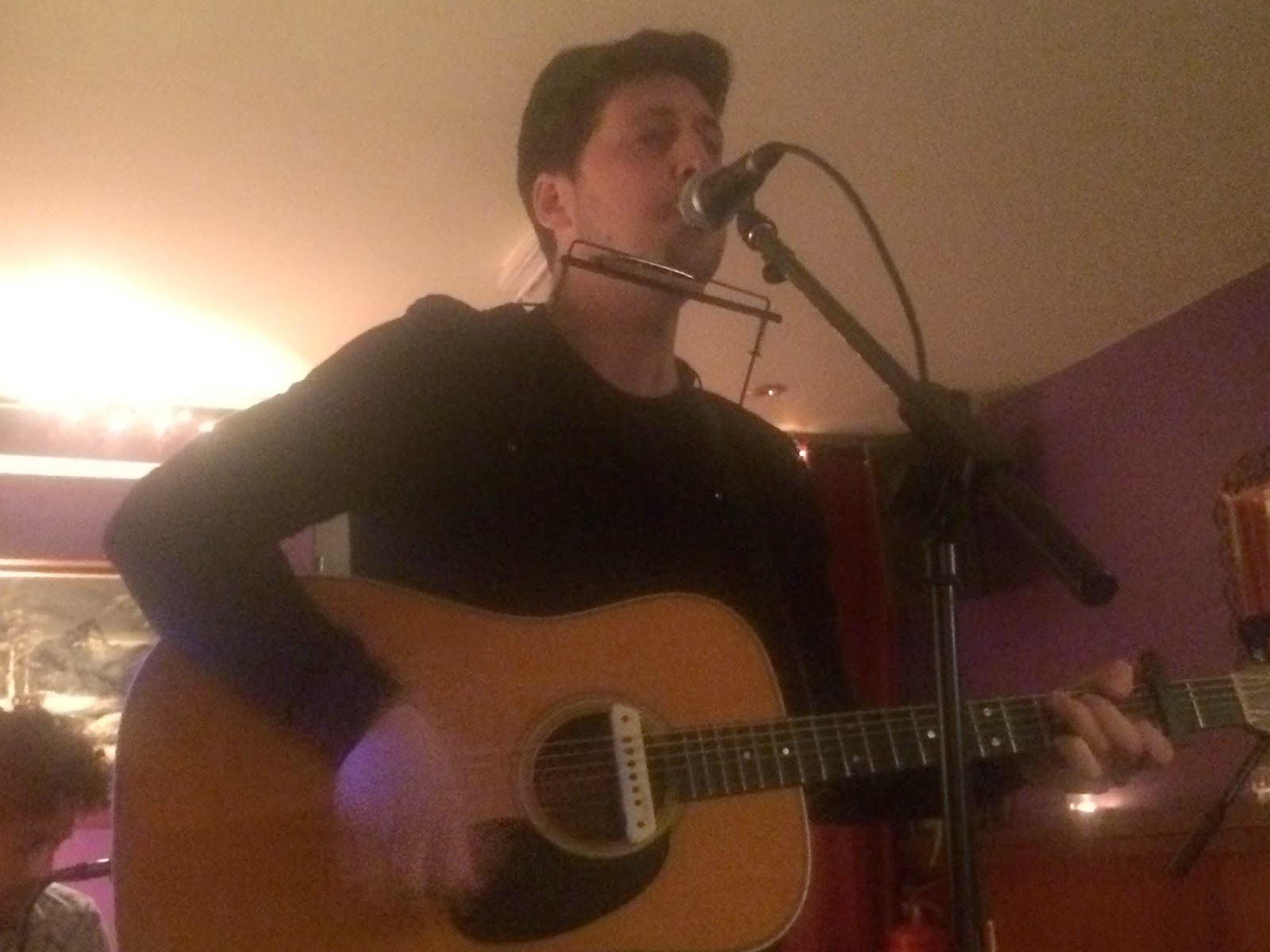 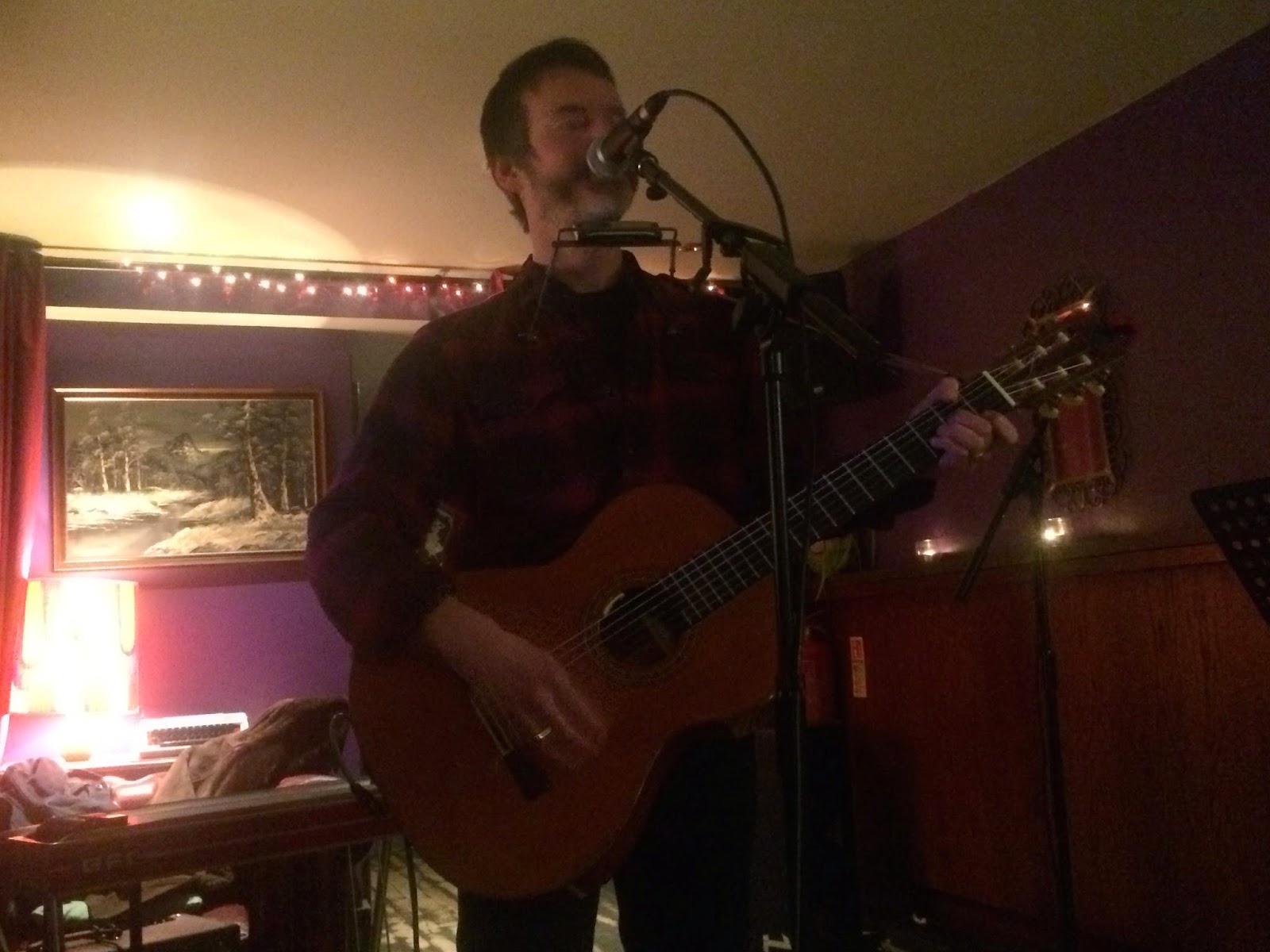 Since his sold-out album launch at The Whiskey Jar in October, Dave Fidler's been quiet other than a few support slots on John Bramwell's never ending solo tour, but tonight he's playing an intimate show to celebrate the launch of his new single Taking Over with support from Mano McLaughlin.


Mano is a massively under-rated songwriter. First his work with Meadow and then 2013's solo album Peach Got Bones have seen him criminally ignored, not only for his songwriting skills, but for his unique guitar style that sees him perform tricks you wouldn't expect from a six-string. His voice is perfect for telling the slightly dark reflective stories that he puts to music. 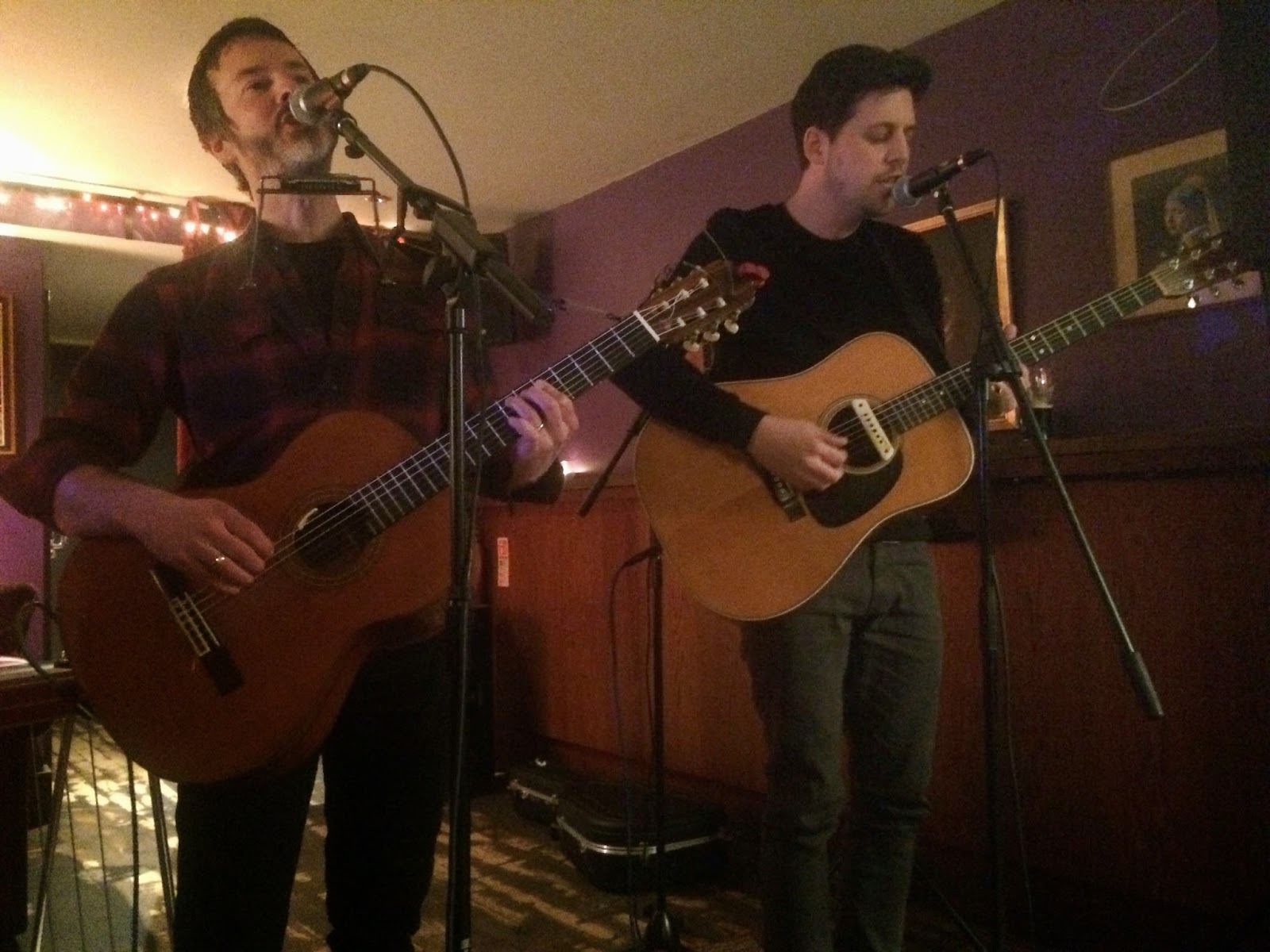 Bus Stop Strangers is the standout track, a tale of the Mano of today meeting the Mano of his childhood and reflecting on what he's become and how the young Mano wouldn't recognise the man him. The equally personal The Morning After The Longest Day tells of the aftermath of the funeral of a close friend. Like Dave, he's a different breed of songwriter from so many around town. His modest, self-effacing style and personality put him at odds with the Fray wannabes that seem to be prevalent these days. Yet he talks to a different audience, those who are a little older in years and a little wiser in life. His tale telling is more real, more gritty and ultimately much more rewarding. 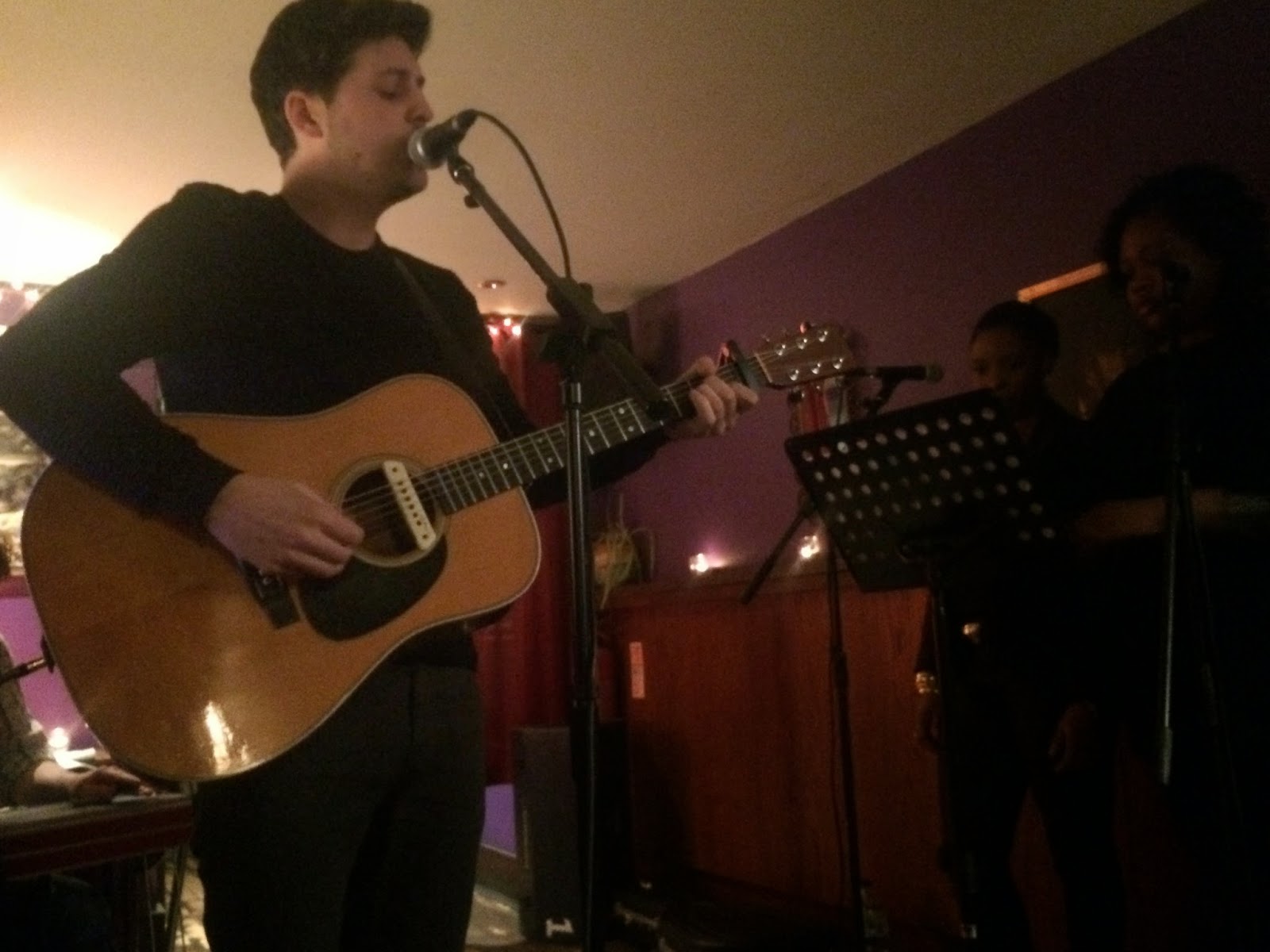 Whilst I'm Not Here was recorded with just Dave and a guitar, his more recent headline live shows have seen him bring other musicians in to help expand on the pure beauty of the acoustic feel of the record. Tonight is no exception as he brings in Jonny Booth on pedal steel for the first part of the set and has two gospel singer backing vocalists in Lisa and Amy as well as Mano joining on a few songs towards the end of the set. The songs flower from beautiful poignant tales of his life experiences into a celebration of love and life and survival.

On songs like Go To Sleep, Easy Gone Easy Come and A Song For Nico the girls' vocals transform the songs into hymns, providing them with a joyous, uplifting feel that lifts them out of the realm of singer-songwriter into something more transcendental. The pedal steel and Mano's contributions later in the set add depth to the sound and allow Dave more reign to show off his own unique style of guitar playing. 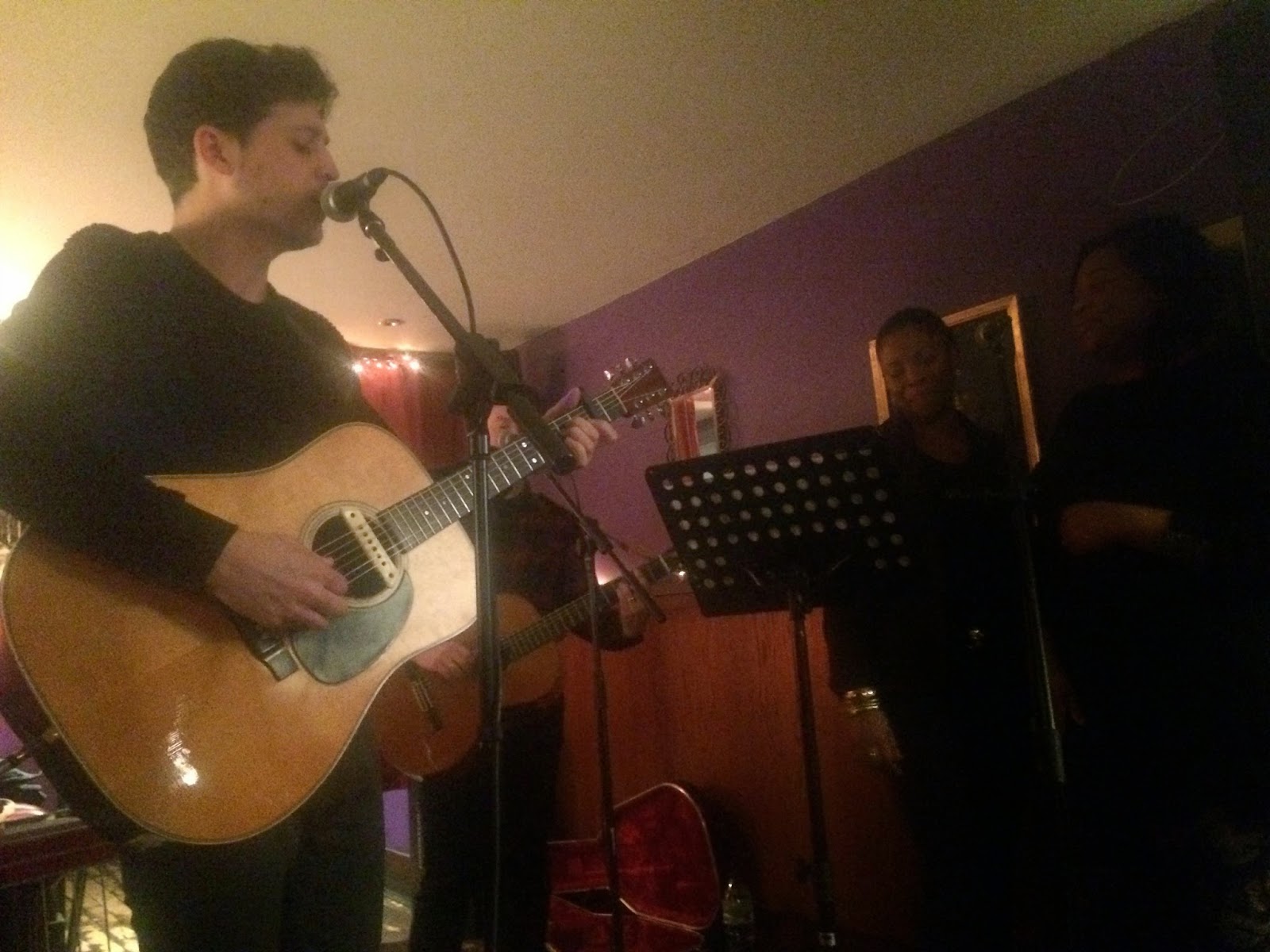 Dave plays the whole of I'm Not Here as well as the utterly gorgeous Go To Sleep, possibly the best song he's ever written, his old band Bluebird Kid Clark's standard Get Up as well as the b-side of Taking Over entitled The Life And Times, the story of a local boy from his hometown of Hyde who departed the world too soon.

There's plenty of chat between songs, joking with the girls, dedicating Silver Spoon to his wife and getting himself into trouble by talking about how he changed the lyrics from brown to pale eyes, promising to change them back then forgetting to do so before bursting into laughter, doing the same when allowing a gentleman to return from the toilet mid-set. Dave doesn't just have the musical ability, but the personality to charm an audience and display an unbridaled modesty at the reception he gets as he's evidenced so much out on the road with Bramwell.

Dave Fidler differentiates himself from the majority of singer-songwriters through the strength of his guitar playing, the consistently high standard of his songwriting and the way his songs leave themselves open to reinterpretation as well as being played straight without losing anything in the process.

Dave played Tommy, Ailsa, Go To Sleep, Easy Gone Easy Come, A Song For Nico, Taking Over, Reassured, The Raise, Where Does All My Time Go, Silver Spoon, I'm Not Here, Get Up and The Life And Times.


Dave Fidler's website can be found here and the album can be purchased on CD and vinyl from there. He is also on Twitter and Facebook.