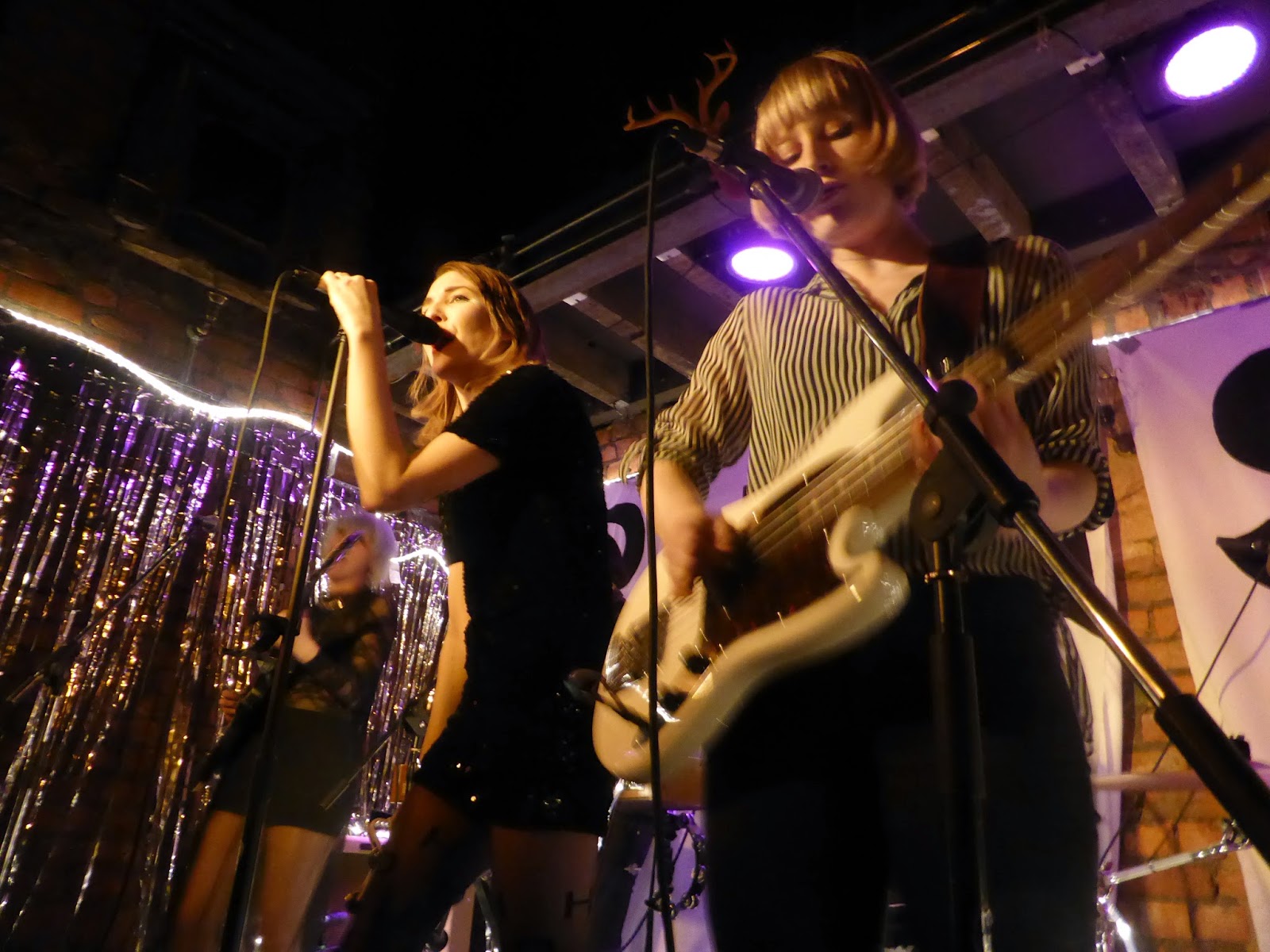 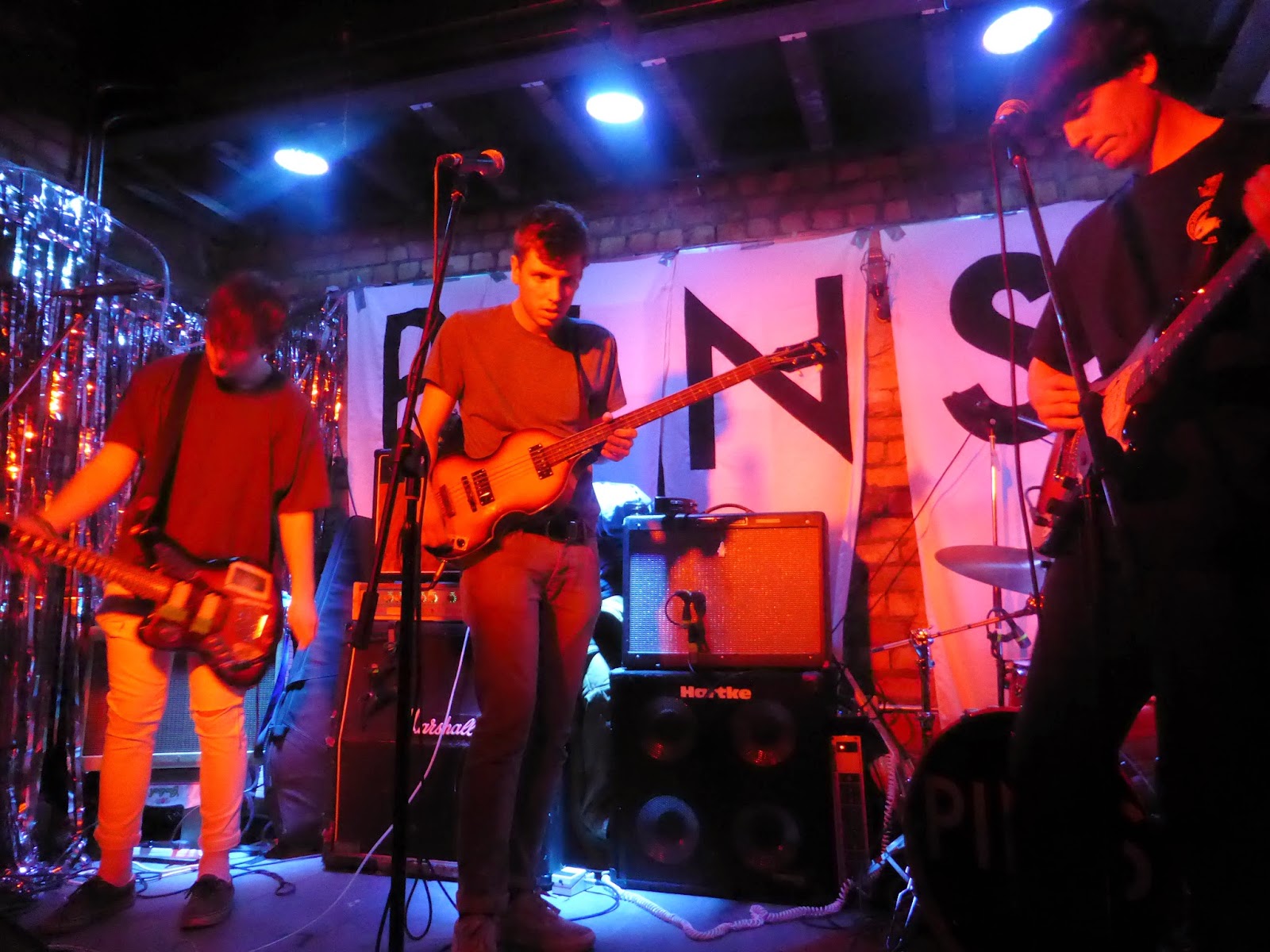 Ahead of the release of their second album in May, PINS hit the road for a short three-date tour, previewing ten songs from the album. We caught up with them in the intimate surroundings of Salford's Eagle Inn where they were supported by Falmouth noise merchants The Black Tambourines. 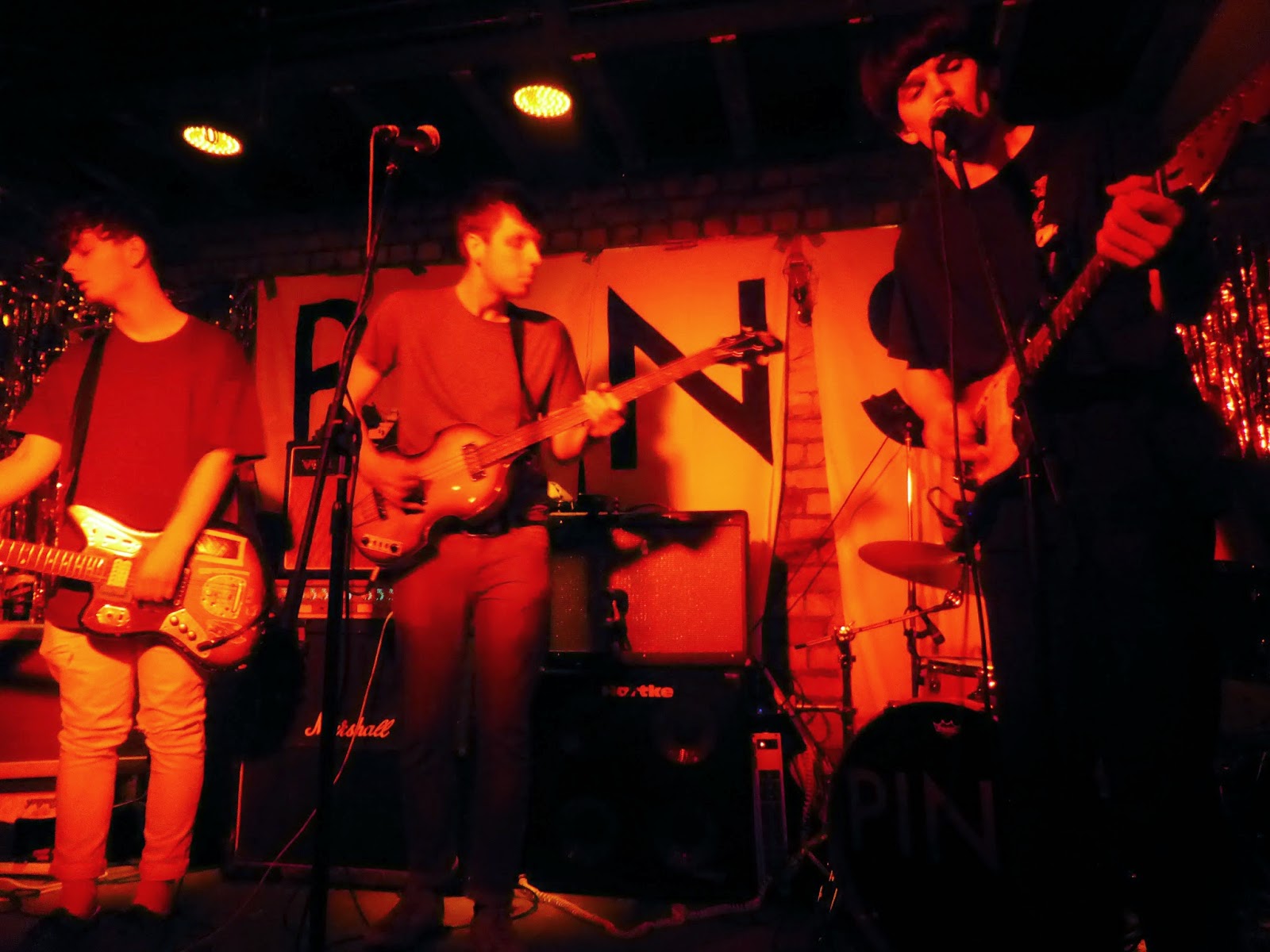 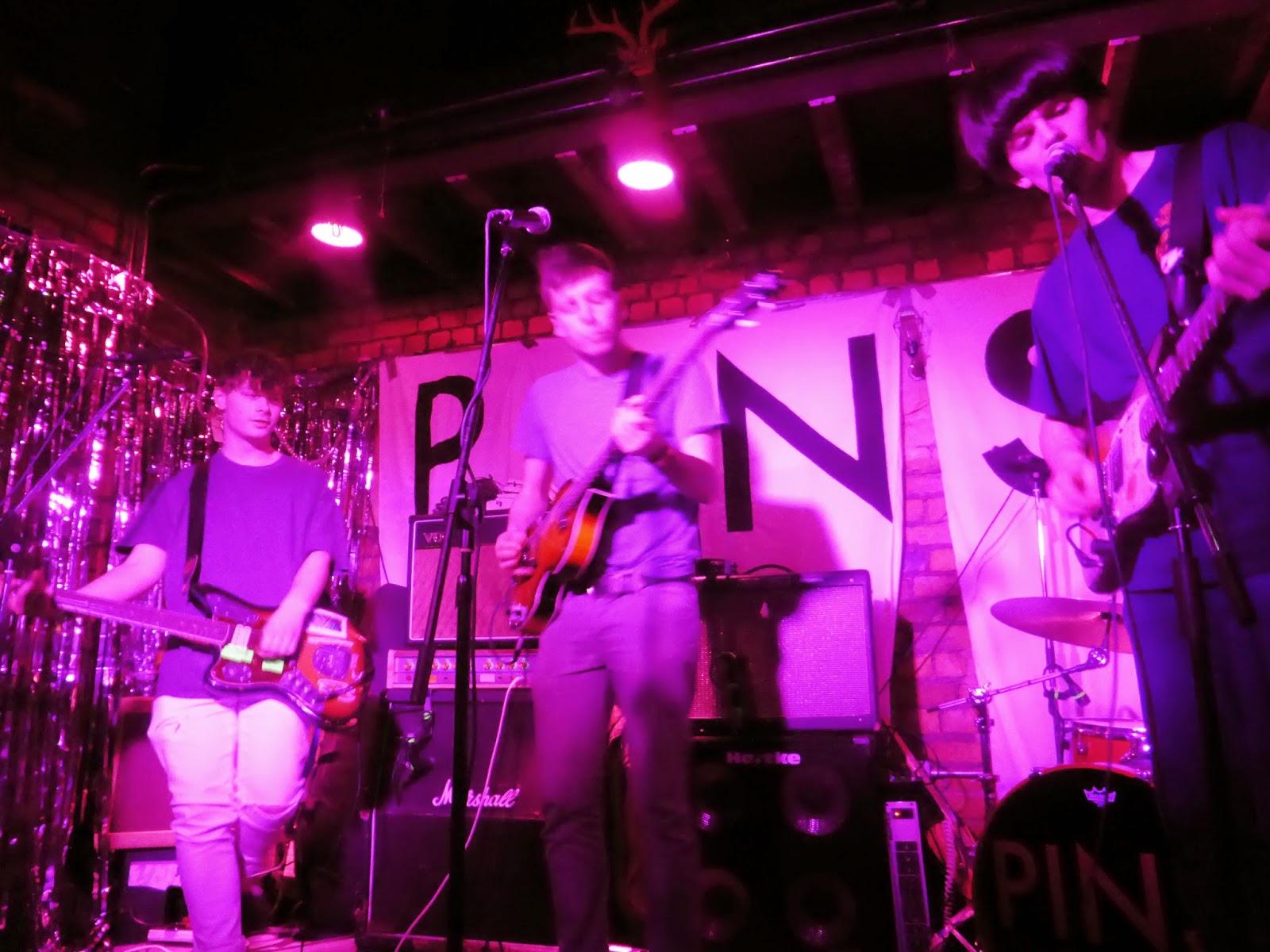 The Black Tambourines open up and they're loud, so loud in fact that it's almost uncomfortable listening to them at times, but it's a discomfort worth bearing for the way that tunes emerge from the wall of sound that's coming out of their amps. Their two guitarists and bass player swap and share vocal responsibilities through their nine-song set, which, we think, is mainly taken from their self-titled debut album. There's a boundless energy and enthusiasm as well as a slight sense that they're running on adrenalin rather than having a master plan that endears everyone to them - they look like they're having a great time up there and it's infectious. It isn't just about loud guitars though, underneath that they appear to have an in-built ear for what makes a great three minute song. We'll definitely catch them again the next time we get the opportunity. 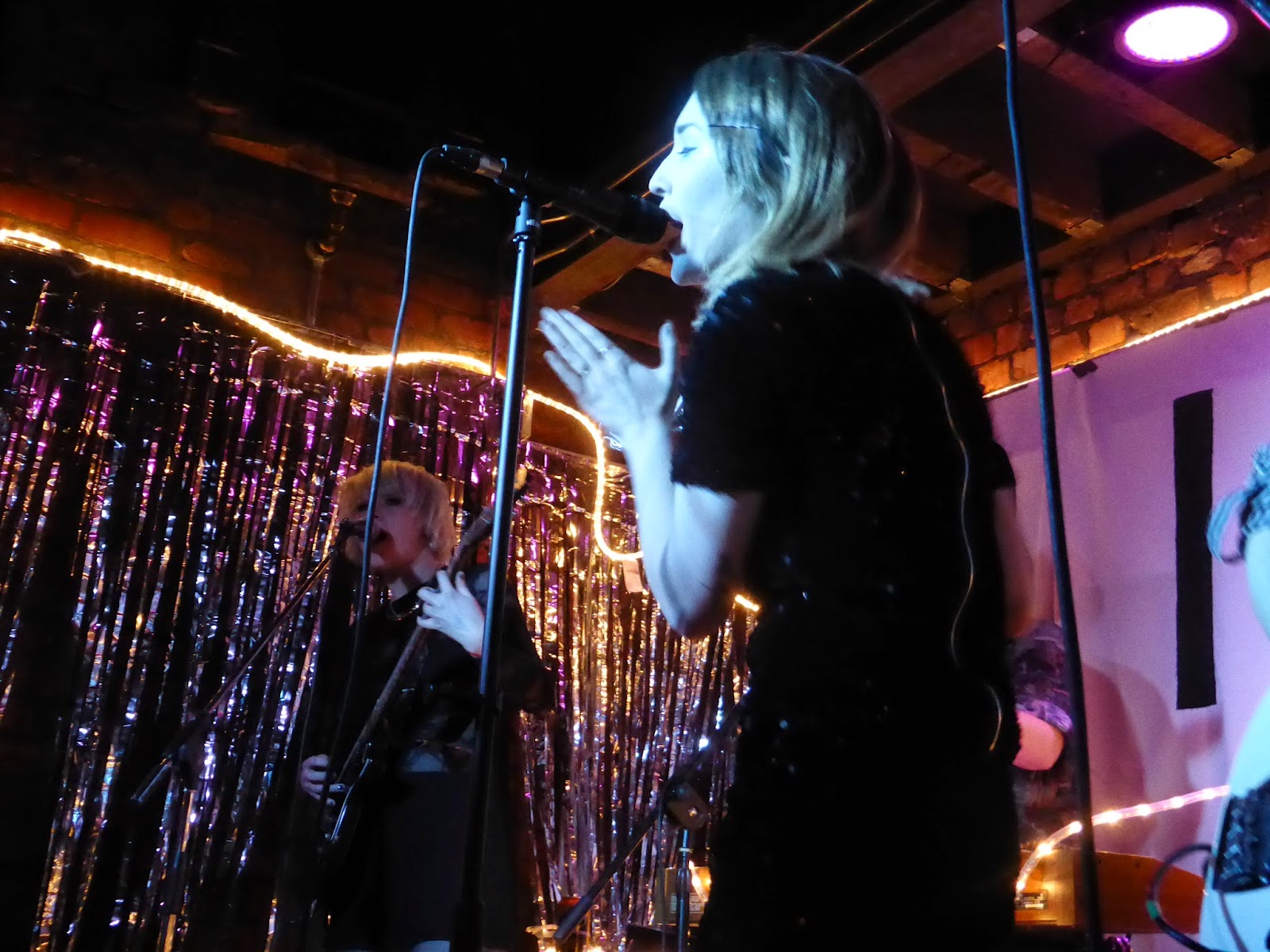 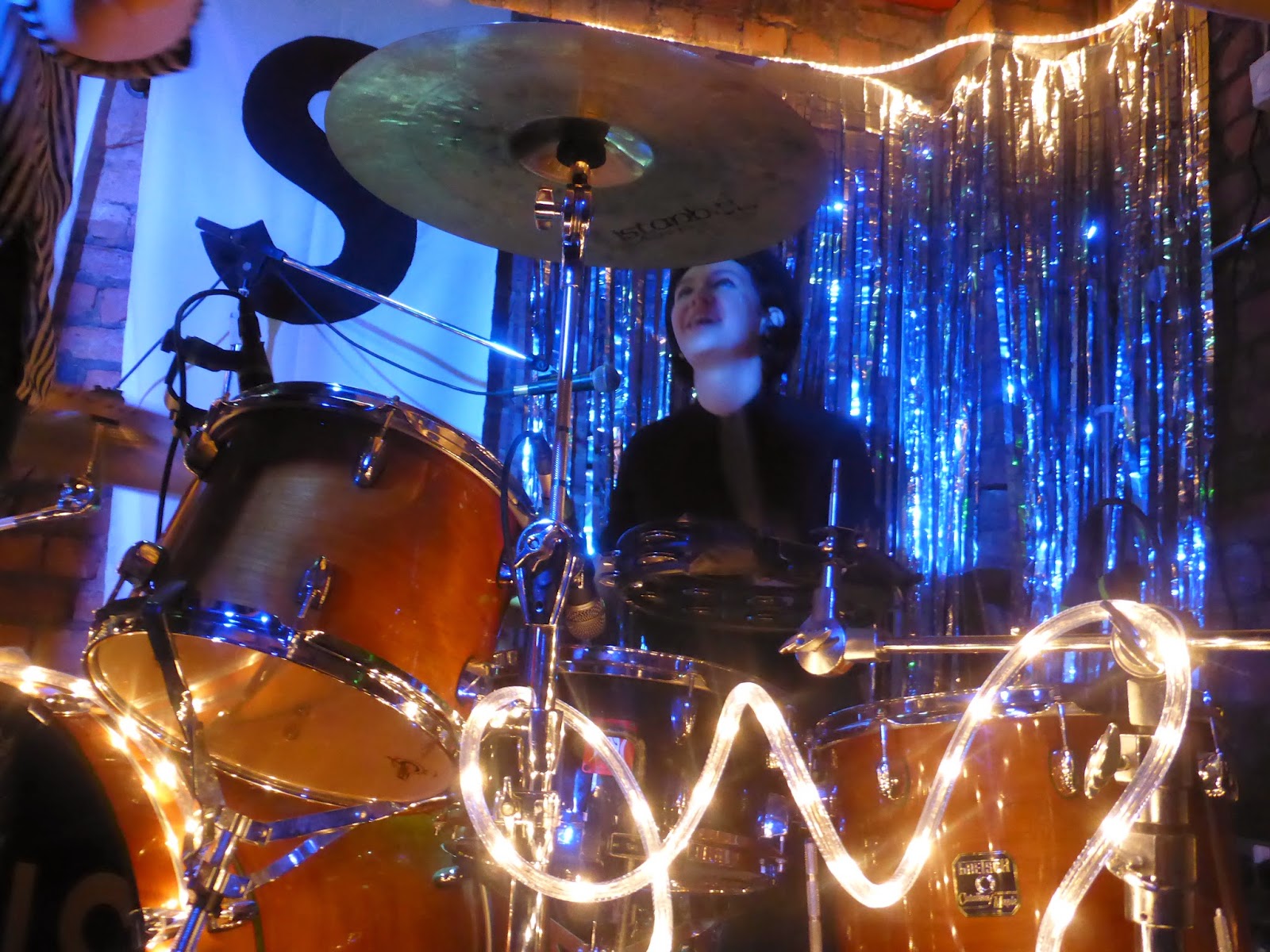 A band's second album can always be a difficult one. The debut album features songs that introduced the band to their audience, songs that had been built up from the very start of the band, often over a number of years with a strict quality filter in place, whereas a second album is often needed to be written whilst promoting the first and with much tighter deadlines. Add to that the very high watermark that PINS set with their debut Girls Like Us and its preceding singles and they're faced with a significant challenge. On the basis of tonight though, PINS more than deliver and we're even more excited about the prospect of the record when we finally get to hear it.

There's a couple of line-up changes to contend with first. Bassist Anna suffered a bad accident cycling a few months back and is still restricted to crutches so she's temporarily replaced by Becky (who seamlessly slips into the groove and the look of PINS as if she'd been there forever) and Kyoto is a new member on keyboards and occasional guitars, which adds a new dimension to the songs.  Anna's there in support on the balcony and the rest of them regularly look up to her. It's this tight-knit friendship and sense of togetherness that made PINS such a great band when they were first learning their craft. Now they're established that's one string to their impressive bow and album two is adding yet another one. 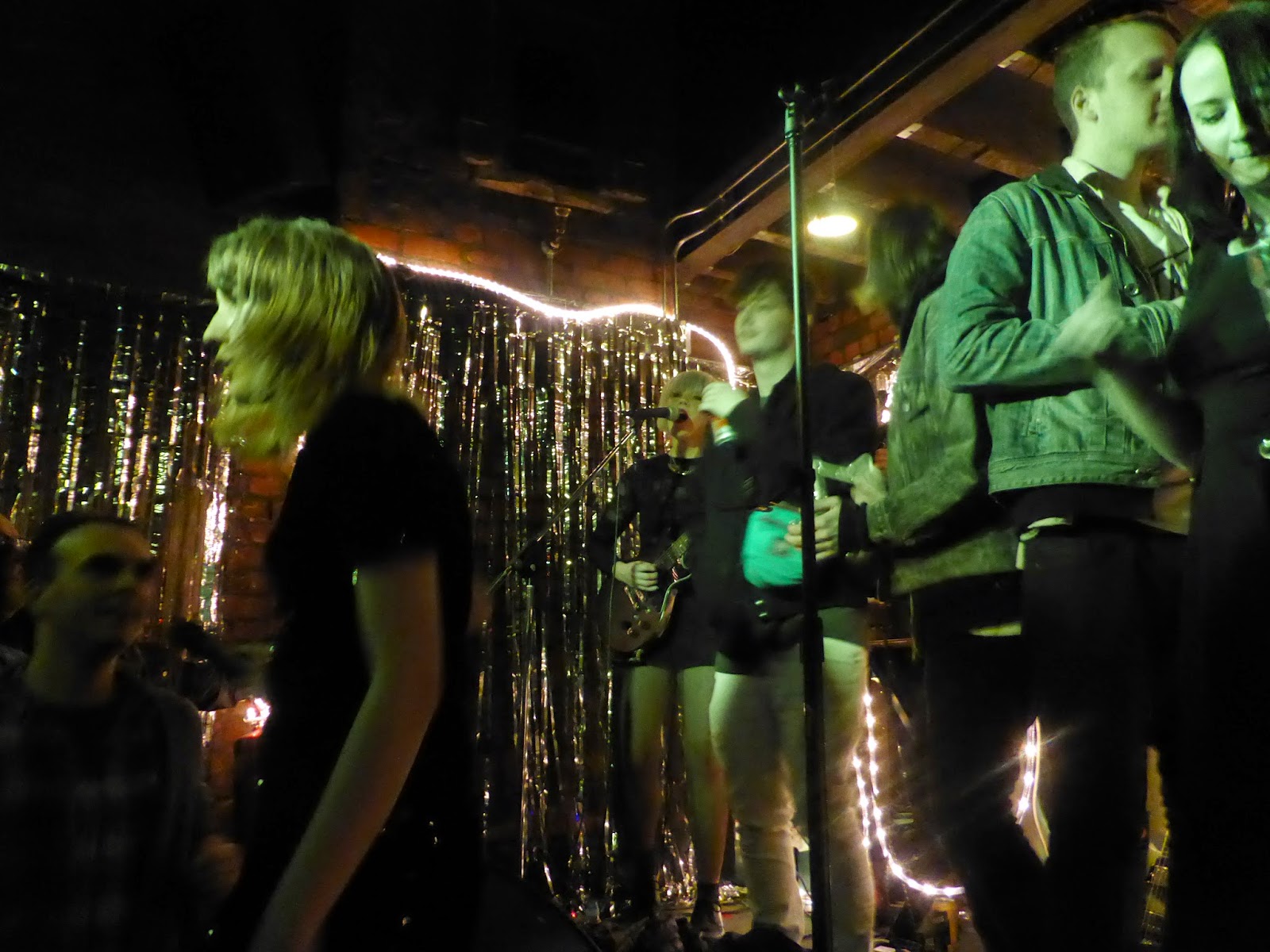 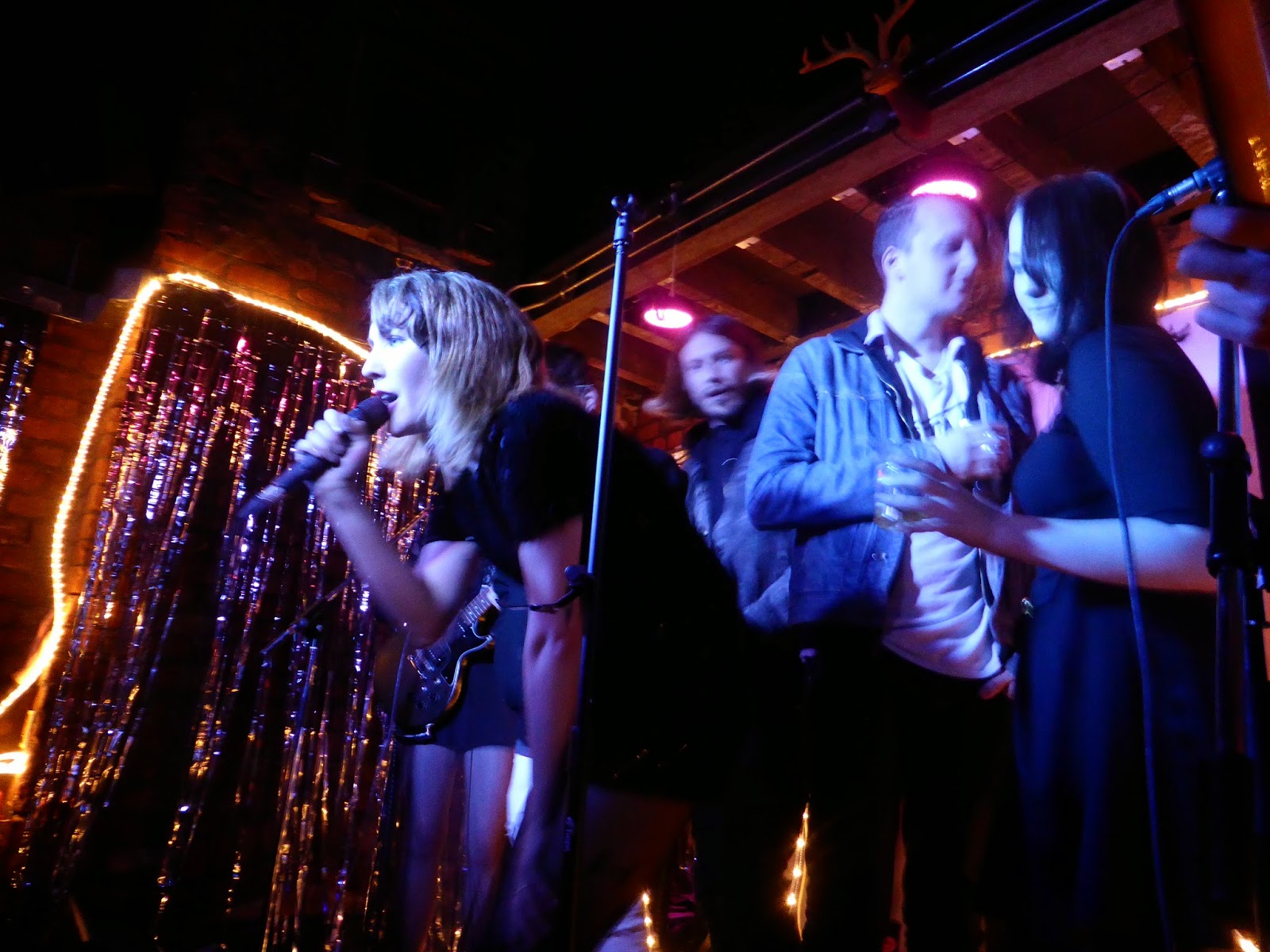 The new songs manage the mean trick of mostly sounding like you'd expect PINS to sound, whilst covering new ground at the same time. There's no reinvention, sonic experimentation, but they're developing their sound and taking it further.

There's the short sharp punch of Baby Bhangs and Young Girls, but then they spread their wings on the likes of Oh Lord, which flirts impishly with psyche and prog and the layered vocals of House Of Love. Then on the likes of Curse These Dreams, Wild Nights, Dazed By You and forthcoming single Too Little Too Late they mix their spiky punk tales with subtle and not-so-subtle three part backing vocal harmonies that should help them garner more airplay and bring them a wider audience. It's the penultimate of the new songs, Got It Bad, that's the real revelation though - a beautifully vulnerable declaration of love which shows that PINS do have a softer, quieter side.

They finish the set with a cover of The Misfits' Hybrid Moments, which sees Faith make her way down into the crowd, and a couple of tracks from debut album Girls Like Us - Waiting For The End and the set-closing title track with morphs into Cyndi Lauper's Girls Just Wanna Have Fun and prompts a stage invasion on a space barely big enough to fit the band. It's interesting to note that they are reaching out and engaging with the audience a lot more than before, with that invasion, the decoration of the room,  giving people party poppers to let loose at the appropriate moment. 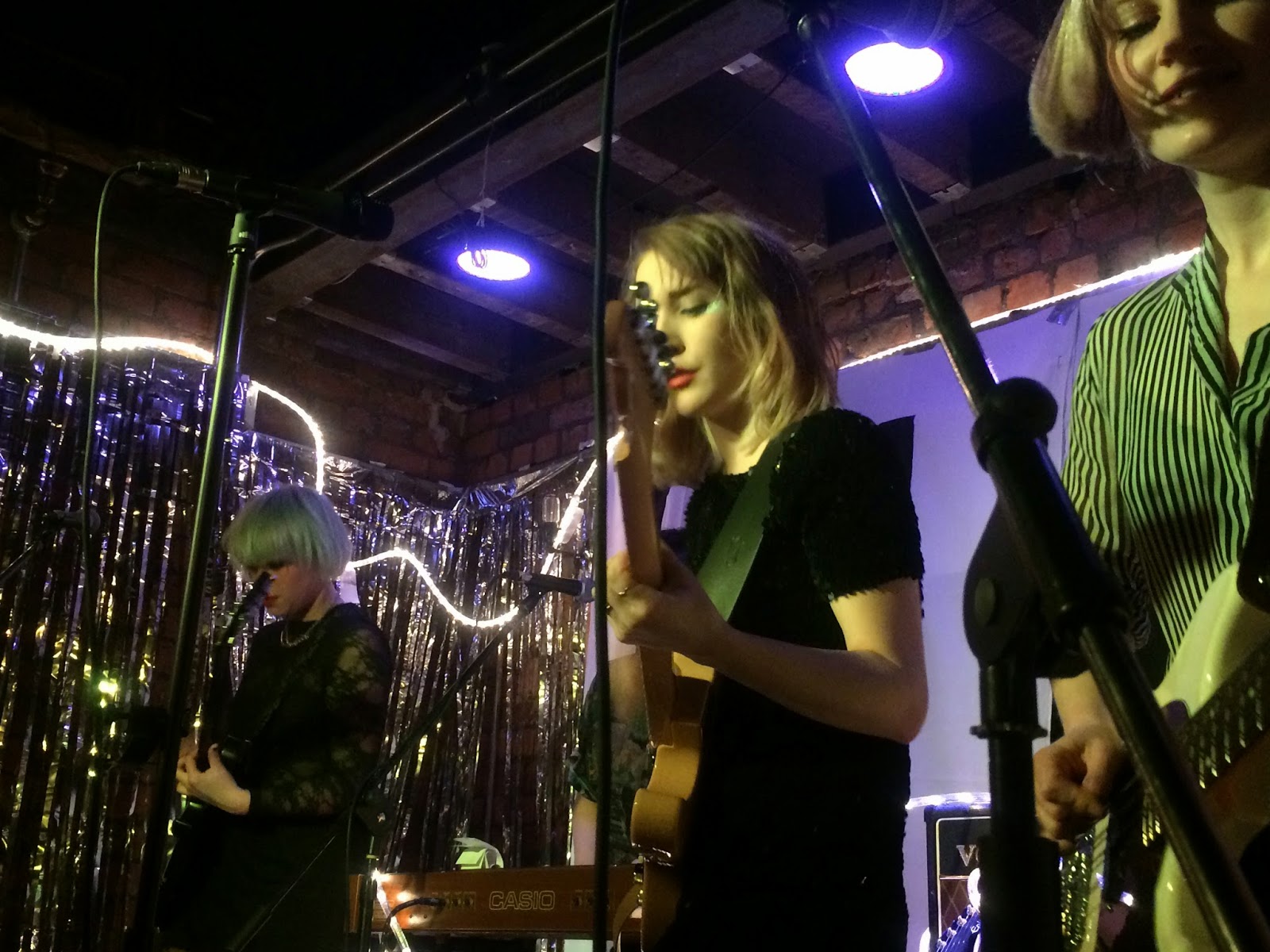 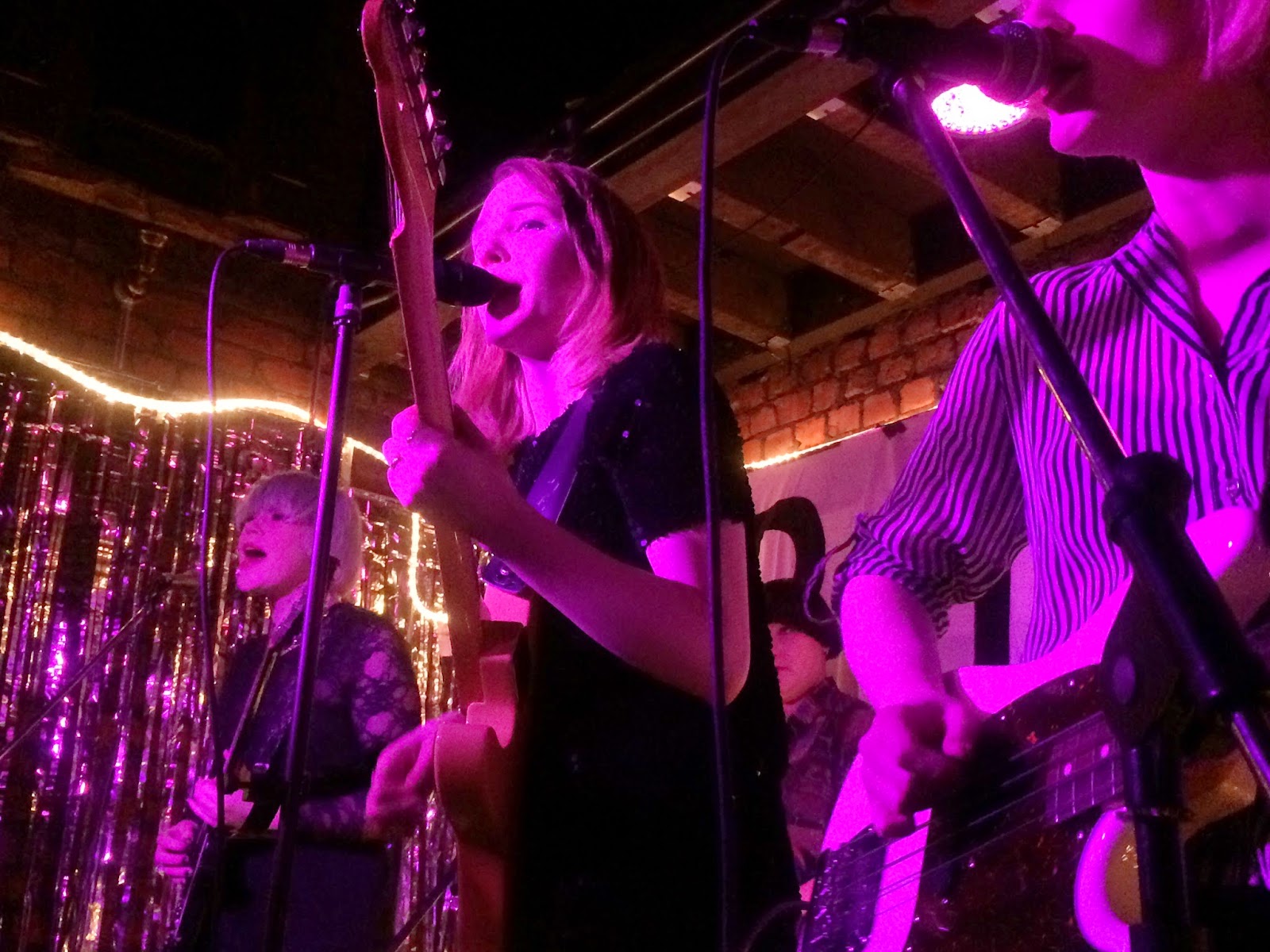 In a week where there's been much debate about festival line-ups and the amount of women on them, it's interesting to note that tonight's sold-out crowd is about 2/3 male audience. PINS should be an inspiration to young women everywhere who have the slightest interest in music. They incorporate everything that should inspire - their gang mentality, the unbridled sense of fun that they have up on the stage, the way in which their home-made fanzine culture and their own record label has blossomed supporting bands they love and, most importantly, how they've developed into an exceptionally powerful live band now with two very strong albums and a series of killer singles to their name from very modest beginnings. Whatever the solution is to that debate that's raging, PINS should be part of it.

Email ThisBlogThis!Share to TwitterShare to FacebookShare to Pinterest
Labels: PINS, The Black Tambourines