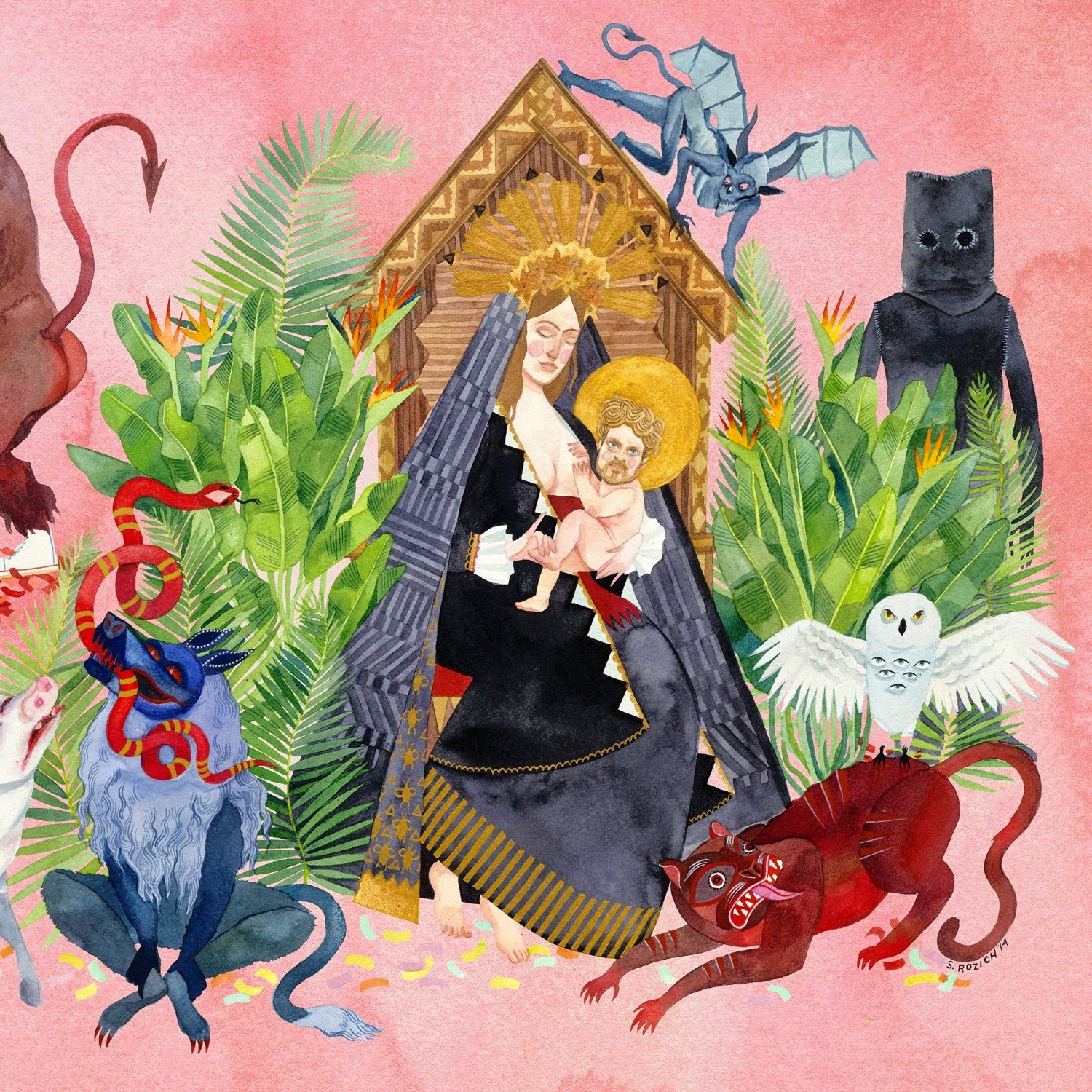 I Love You, Honeybear is Father John Misty's second album, but it will go down as the ex-Fleet Foxes man's masterpiece. It's a record that's beautifully simple and unequivocally timeless in its execution, but which manages to feel and sound exceptionally complex in its construction.
The album opens with lush piano and strings heralding in the title track, which sets the tone for the rest of the album, the arrangements majestically swoop and sweep, concealing the dark intent and sexual explicitness of the lyrics  "you're bent over the altar and the neighbours are complaining that the misanthropes next door are probably conceiving a deviant."

It's a theme that continues as the record continues, the bizarrely titled Chateau Lobby 4 (In C For Two Virgins) tells of a twenty-year relationship - "I want to take you in the kitchen, lift up your wedding dress that someone was probably murdered in" - and you're transfixed by what story he will bring into  the lyrics next and just how his mind is working throughout. There's beautiful brass, again creating an unholy juxtaposition between the beauty of the music and the sexual depravity of the lyrics.

As the record progresses, the music palate shifts one way then comes back full circle. True Affection sees the orchestral leanings in the arrangements replaced by a looping electronica, but the lyrics don't get any more straight-forward. The bizarrely-titled The Night Josh Tillman Came To Our Apartment (Father John Misty is Tillman's nom de plume) continues the sex obsession but takes a different tack, admitting "I feel so unconvincing when I fumble with your buttons", but then references choking. It's hard to decipher specifically what he's going on about, but it's ultimately the fascination that makes the record so engrossing.

When You're Smiling And Astride Me is the most perverse type of love song, declaring love to the strains of choral backing vocal harmonies, whilst Nothing Good Ever Happens At The Thirsty Crow heads off into a folky country style and sees Tillman in storyteller mode, albeit still with the twisted bent that flows through the whole album. Strange Encounter is just that, still holding back on the instrumentation, talking of a half-naked girl who nearly died in his house and its aftermath.

Things get turned back up and the kitchen sink brought out again for Ideal Husband, but shows a more reflective side to the chaos of the character in the songs - "every woman that I've slept with, every friendship I've neglected didn't call when Grandma died, got drunk and high" start a tale of woe and exhuming guilts and regrets before asking the belligerent question of whether he'd be the ideal husband before the song stops suddenly.

A solitary piano opens Bored In The USA, creating a tension as he reflects on life in debt, the dispensability of life and the individual. There's exaltations for the white Jesus to come and save him. Strings come into build the tension as he tests his vocal range and as he reels off a list of his ills, there's laughter in the background, mocking him.  Holy Shit continues that observation of the world around him, the meaning of the title becoming more evident as he talks of ancient wars, original sins and holocausts before the song explodes into life with a stream of consciousness which comes to the conclusion that "love is an institution based on human frailty."

I Went To The Store One Day is so bleak and fragile that you fear for his sanity as the album draws to a close. Guitars so quiet, tickled rather than played, the return of the menacing strings to create the atmosphere all serve to make the voice the centre point of the song.  But then you realise it's about the  moment he met the love of his life.

I Love You, Honeybear is a frankly astonishing record. Despite the range of subjects that Tillman broaches, it's not devoid of a theme as it jumps from drug-fuelled strange stories to periods of self-assessment, regret and self-loathing and to moments of joy and the epiphany of discovering that you've fallen in love. You can't quite tell whether he's writing about a mythical mysterious man, the Father John, or whether it's a pseudonym for his own self-evaluation because he never quite gives the game away completely.

Musically, the simplicity of the instrumentation across most of it creates the mood and atmosphere to enhance the impact of the lyrics. It's uneasy listening in parts, but ultimately rewarding, you understand more with each listen, that he's actually talking about all the things that make up love, the good and the bad, the lust and the doubts of whether it is worth it, but you know however much more you uncover you'll never quite get into the darkest recesses of his mind.