We caught Troubadour back in October last year at the Whiskey Sessions Unsigned finals and were impressed by them. They've recently released an EP Infinite Expectations and played a launch show at Salford's Eagle Inn. We were otherwise disposed, but Thomas James stepped in and reviewed the evening's events for us.

Carnival Town was going to be a hard act to follow. “Troubadour break new ground with their perceptive songwriting” David Jones, of Folk North West magazine wrote of the Blackpool duo's debut studio album. Here was a collection of “songs that are polished and slick” according to Ben Cooper, Editor of Acoustic Magazine. A collection of 10 songs which took the listener on a roller coaster journey from the foot stomping freshwater pirate shanty By The River, to the tear jerkingly performed tale of lost love, If I'd Have Known, before storming to a summit finish with the gorgeously uplifting From The Hip. Also included on the album was Shelter. Whilst the song pleaded for refuge from a metaphorical storm, it exposed Troubadour to an audience of millions when it was picked up by the BBC and used in the soundtrack to the TV drama Waterloo Road. 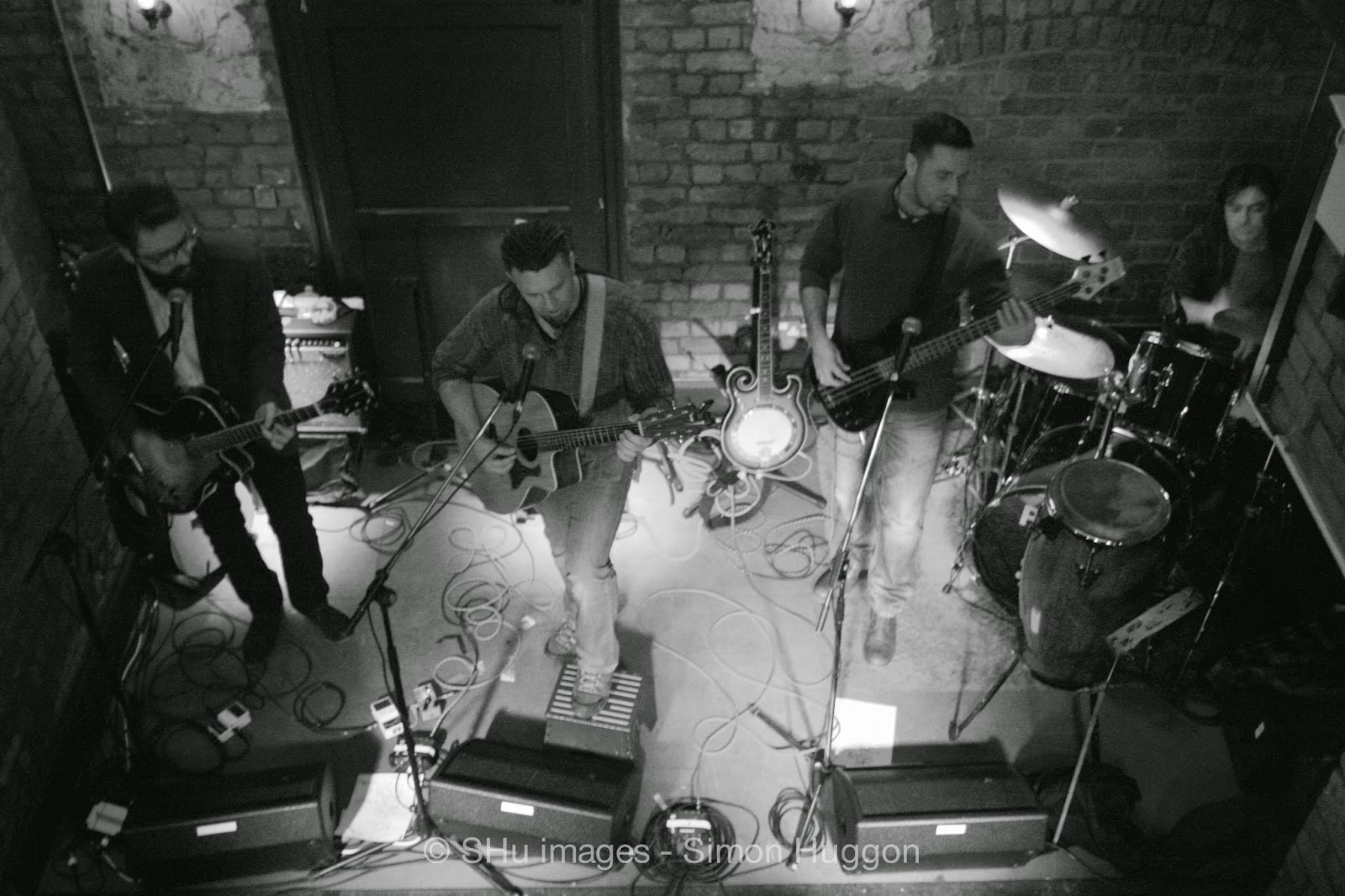 However, the touring of this first album already offered clues that Michael Shanagher and Andrew Bache would not be content to rest on the laurels of another stripped back acoustic recording. I've seen the duo regularly joined on stage by a host of guest musicians. Additional vocals and guitar from the immensely talented Andy Stones and upright bass from Christian Topman. Backing from an orchestra in the Grand Opera House, York. And of course an unforgettable evening at the Lowry Theatre in Salford with Brian Stafford on the hauntingly beautiful Uilleann pipes, Billy Hickling from the hit West End show, STOMP on some very innovative percussion, and backing vocals provided by the Lennanshees, a group of three female acapella singers from York whose harmonies can one moment tingle your spine, and warm your heart the next.

Such collaborative forays hinted at the duo's desire to seek out a bigger sound. That search has ultimately lead to tonight. The launch of Troubadour's first release as a four-piece: the EP, 'Infinite Expectations', showcasing the band’s new weightier sound with the addition of drummer Chris Tweedie, and multi-instrumentalist Bobby Turner.

The launch is at the Eagle Inn on Collier Street in Salford, Manchester on Saturday 31st of January, and I'm amongst the sell-out audience as Troubadour take to the stage. There really is an air of expectation. Many of the guests tonight have travelled some distance to be here, from both East and West coasts of the UK. Some have travelled from as far as Bulgaria and the Netherlands, and for most it will be their first experience of Troubadour as a quartet. The venue only serves to intensify the atmosphere. With the audience able to occupy two levels in front of the stage in the simply converted terraced house, every member of the sell-out crowd is treated to an intimate experience.

Shanagher ascends the steps up to the stage with an almost gangster-like swagger, straps on a Gretch, and turns to face the audience, sporting a full beard that gives me the impression that his face was attacked by a small but tenacious grizzly bear on his way to the show, as his Gretch chugs and crunches its way through the intro to the opening number. 'Hello everyone....this is Culture Vulture, and its on our new EP'. One by one the rest of the band join in...a slinky slidey acoustic riff from Bache; Turner with a bass-line reminiscent of the Cure's Lovecats and some solid but bouncy drums from Tweedie have the audience jumping right from the gun. By the time Bache's growling vocals take over, my mind has already been transported to a sun drenched field. This will surely be the sound of the summer on this year's festival scene. Culture  Vulture is the second track on Infinite Expectations, and despite the catchy sing-along feel, an undercurrent of anger and disillusionment at the conduct of our political leaders is wholly evident.

The first half dozen songs include four of the five tracks from the new EP. Buffalo stomps along with some intriguingly dextrous and evocative lyrics, a funky reggae-esque bass riff and Turner takes over banjo duties. Fingers To The City starts sweetly with some intricate acoustic guitar work and swooping reverb infused penny whistle, before building to a chugging monster of a chorus which has the audience bouncing again. Mixed Medicine has been around for a while, but its never been played like this before. Its not so much been given a make-over...more like its been given a course of steroids. The band explode into the song as Bache's harmonica shrieks and wails. Then, as suddenly as they started, the instrumentation drops out, leaving Tweedie's thumping hip hop drums behind Bache and Shanagher's unison vocalisation. Is this the Beastie Boys does folk? Whatever it is, it works, its fresh, and its breathless stuff. 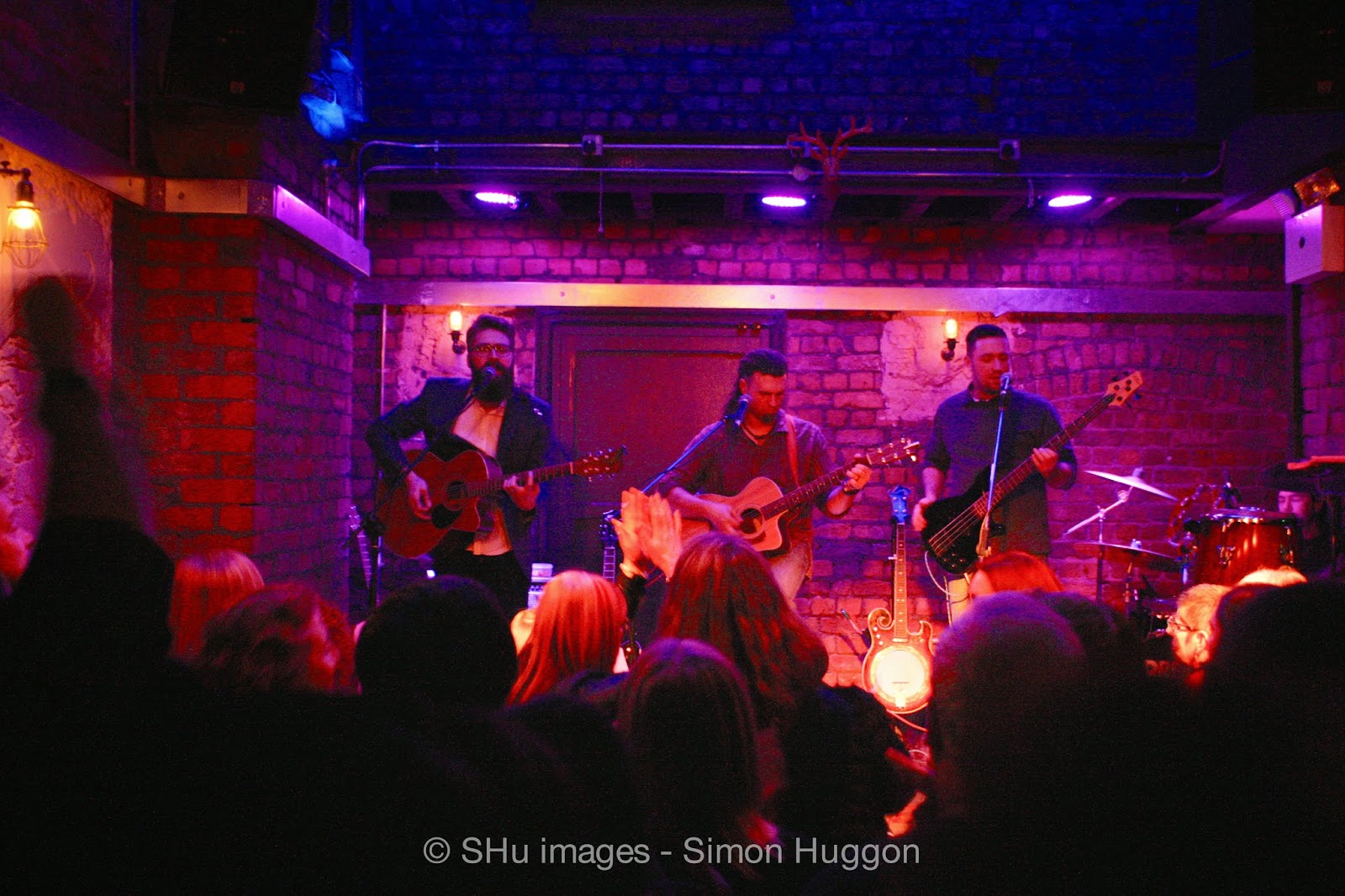 It's almost a relief when Tweedie exits the stage, leaving the remaining trio to perform tracks from the first album, Carnival Town, with the addition of Turner's soothing baselines, before he too exits the stage. Shanagher and Bache play San Francisco and Porcelain, the two most stripped back songs of the evening, to an appreciative and now pin drop silent crowd. Following the quiet intensity of Porcelain, Tweedie and Turner jump back on stage and immediately launch into another new track; the dance grooved, latino infused Que Bonita which instantly whips the audience back into a frenzy. And then the mariachi waltz that is Bandits documents Shanagher's journey through bandit country before he counts the audience in to provide the opening acapella lines to the massive crowd pleaser, By The River, once again beefed up with Tweedie's drums and Turner's bass.

The crowd scream for more and the four remain on stage as they take their applause before launching into their encore. From The Hip also gets the full band treatment to the delight of their fans, and then just when you feel things can't get any more frantic, the band take it up another notch with the final song of the evening and the final song of the EP, Not Only A Home; Shanagher's heart warming tribute to his first born has fans dancing and clapping all the way to the chequered flag as once again I can feel the Earth under my feet and the sun on my face as I realise that this show should be performed on every festival stage in the land come Summertime. If they're not already on your festival line-up, then get them on.

Then the four musicians take their bows and head to the merch table for a lengthy session signing copies of Infinite Expectations. It just remains to say that the launch and the EP exceeded all of my expectations. I've got my copy. Make sure you get yours.

All words by Thomas James. Photos by Simon Huggon.

Email ThisBlogThis!Share to TwitterShare to FacebookShare to Pinterest
Labels: Troubadour