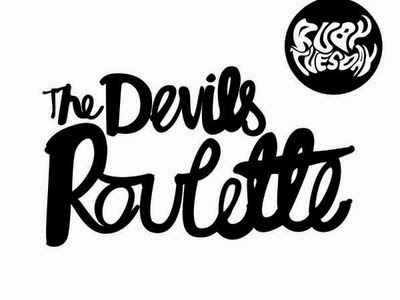 The Devil's Roulette is Ruby Tuesday's debut EP. After building a strong reputation as a live band with their guitar and drums only approach, the EP is six songs steeped in their philosophy of hit and run songs that leave the listener trailing in their wake.

The opening air raid siren of Sell Me Out is like a call to arms to the disaffected, those sick of listening to the watered-down commercial fodder that passes as the rebirth of guitar music. It merges into a thrilling pulsating riff and effect-laden vocals which move from singing to screaming and back again, but which define perfectly the rough and ready combative approach that Ruby Tuesday take to their art.  There's a similar no-nonsense approach to Weapon At The Door, guitars fire shots left, right and centre, leaving the listener uncertain as to what direction they'll go off in next, whilst Joel's vocals create all kinds of mayhem of their own, dragging the listener's attention to and fro between the two of them.

The unadultered chaos continues as the drumroll opening to Stargazing catapults itself into a wall of guitar that jumps from one idea to the next without pausing for breath and a vocal refrain that'd be perfect for radio if stations were willing to risk something different to their major label playlisted monotony.  Let People Go starts with a languid furtive guitar sound that you know is delaying the inevitable descent into a filthy, dirty, menacing chorus and even though you know it's coming, the sheer ferocity of it still astounds.

Fall is marked by another filthy rolling guitar riff with those deliberately muddy vocals fighting their way through whatever effects they've been put through with the drums coming in at opportune moments to usher changes of pace in the song. Fools In Belief is a full-on stomp from the opening bars and is marked out by guitars dropping out at key points to leave drums and vocals dictating the song before it all comes back together again.

With just two instruments and a very set modus operandi, it's astonishing how Ruby Tuesday manage to make six very different tracks on this EP, yet they're all united by a sense of purpose, a real intent to grab the listener by the ears and tear at them till they capitulate. The longest track of the six here is three minutes and five seconds. Ruby Tuesday don't believe in messing around, they take aim at you and hit the target every time. The Devil's Roulette is what Royal Blood would sound like if they actually delivered on the hype and what Kasabian would sound like if they were as rock and roll as they think they are.  Despite such modest resources and options available to them, Ruby Tuesday are something quite special.