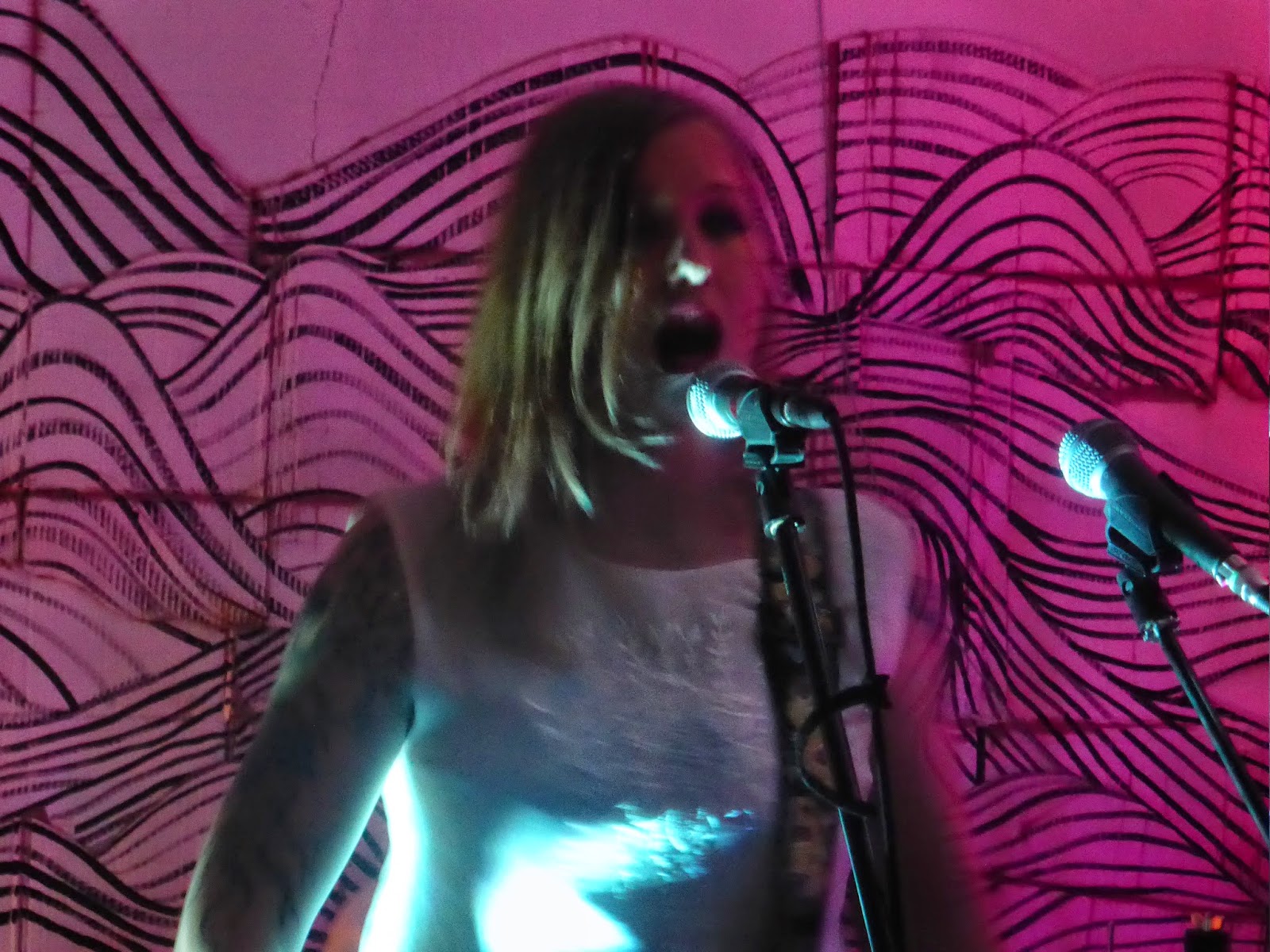 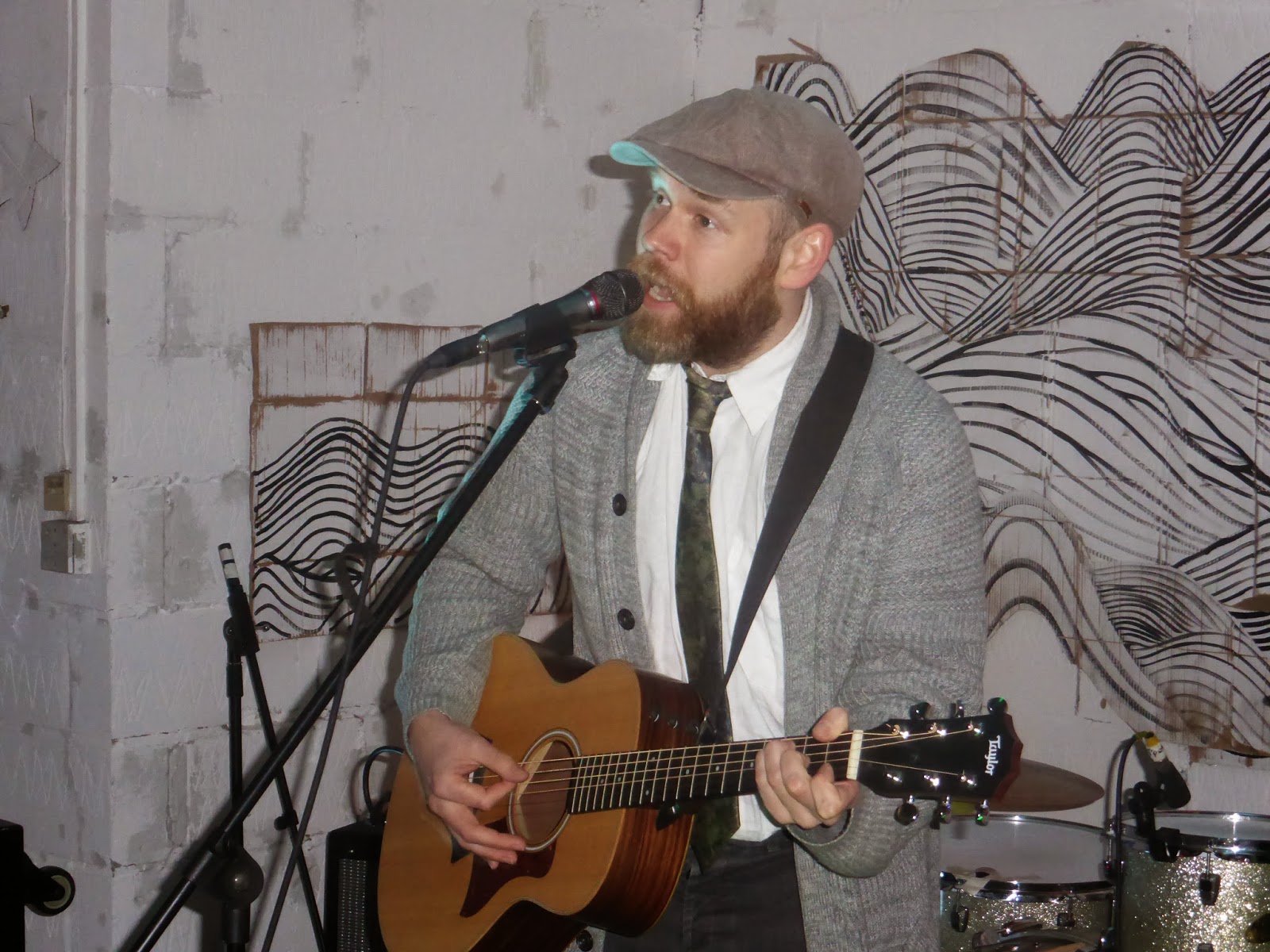 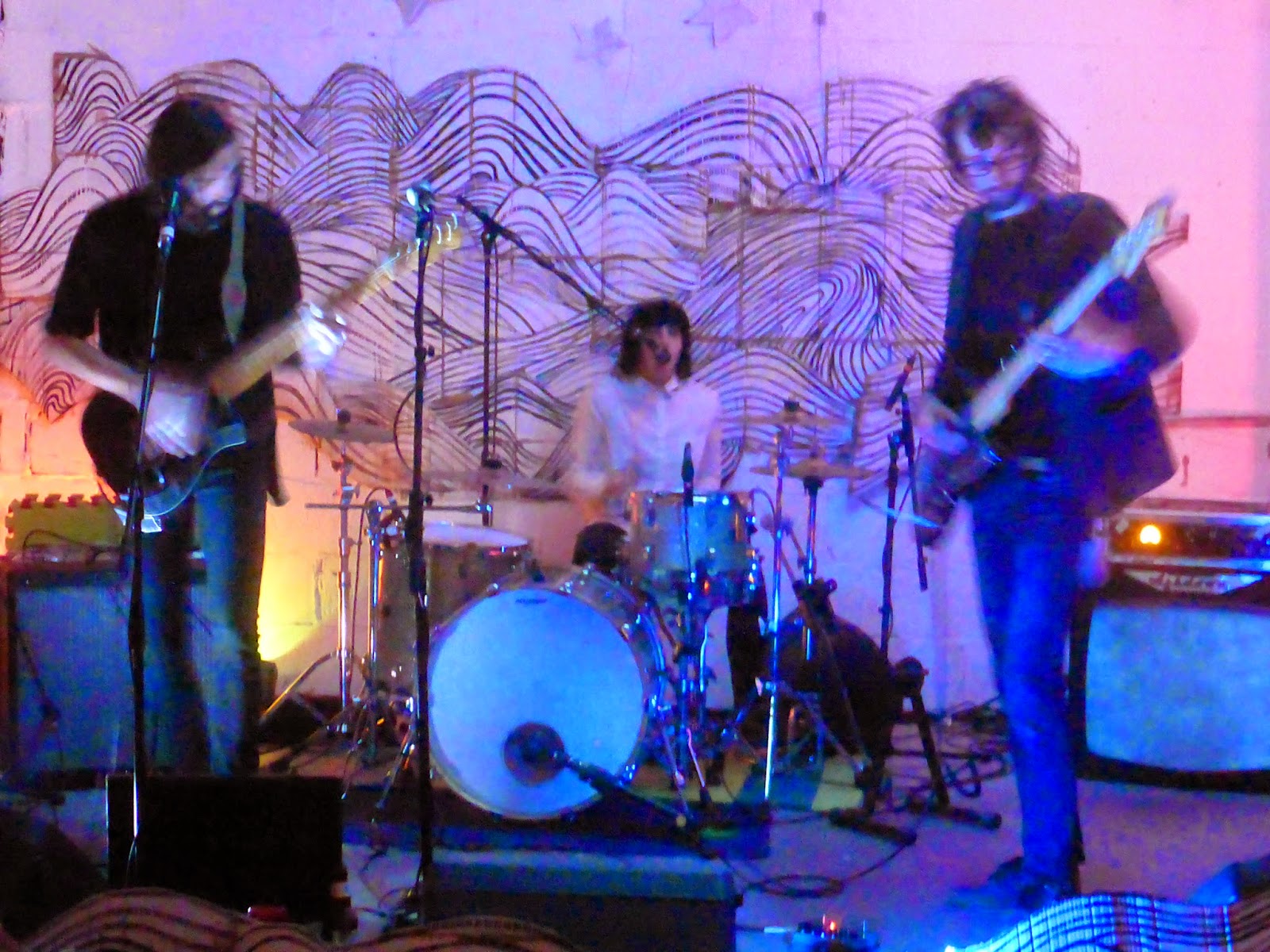 Ahead of the release of her third album Direction Of Travel in late summer, Laura Kidd, aka She Makes War is on a three-week tour of the UK previewing tracks from the album accompanied this time by a band rather than her solo set.  We caught her Manchester date at the rather lovely new Wonder Inn with support by local eccentric hero Louis Barabbas and Bristol's Forgery Lit.

Opening up at Forgery Lit, a Bristol three piece featuring Ami on vocals and drums, Jo on bass and backing vocals and Niko on guitar. Their set is characterised by thrusting rhythmic tracks driven by Amy's drums, which dictate changes in pace and direction of the songs and which allows the others to flesh them out. I'm always impressed by drummers that manage to sing as well and Ami is no exception, her voice slightly rasping in places, half-spoken, half-sung in others.

There's great interaction between the band as well. Ami constantly ribbing Jo between songs and there's an intuitive feel to how the songs run, a little rough round the edges yet it's that rawness, grit and grime that makes them so appealing. Stand out tracks are Bicycle and Contact and they're definitely worth getting there early for.

Next up is Louis Barabbas, shorn tonight of his Bedlam Six, but not of the bedlam. He starts off by introducing tracks from a musical he's written and finishes by playing some crowd requests from his back catalogue. He's an intriguing performer, all facial expression, a tendency to cock his left leg backwards at intense moments in the song and a penchant for jumping into the crowd. There's drama aplenty in the songs which tell slightly off-the-wall tales (think The Tiger Lillies) and he explains each of the songs and their context in the musical.

He doesn't just sing the songs though, he performs them through his facial expressions and you think the musical would work as a one-man show. He finishes the set by taking some of the audience's requests including the set-closer, the rather bizarre but wonderful The Tell Tale Hound, a story with three characters including a dog who he impersonates. It teeters on the fine line between genius and what the f**k is it, but thankfully comes down on the right side. 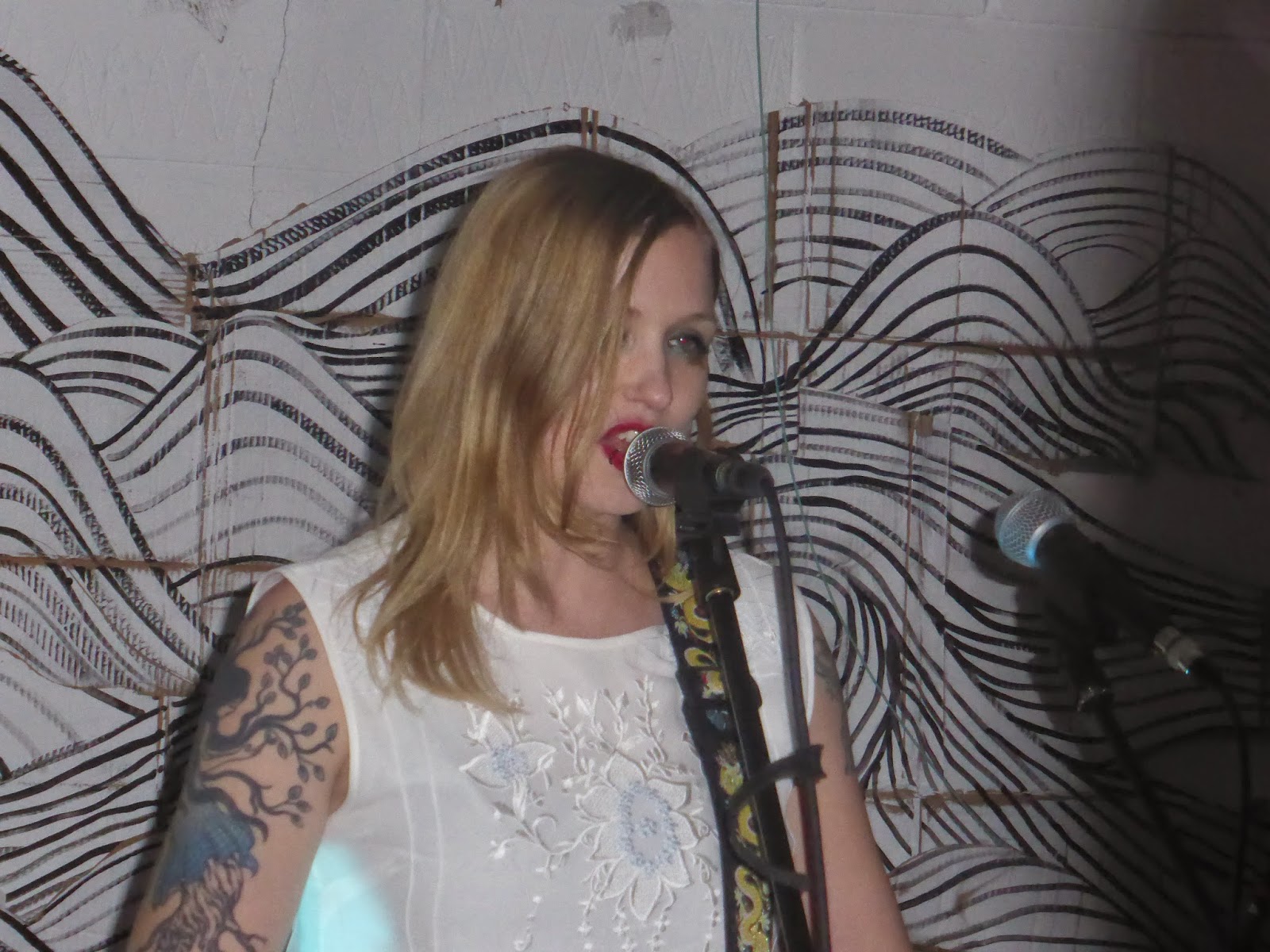 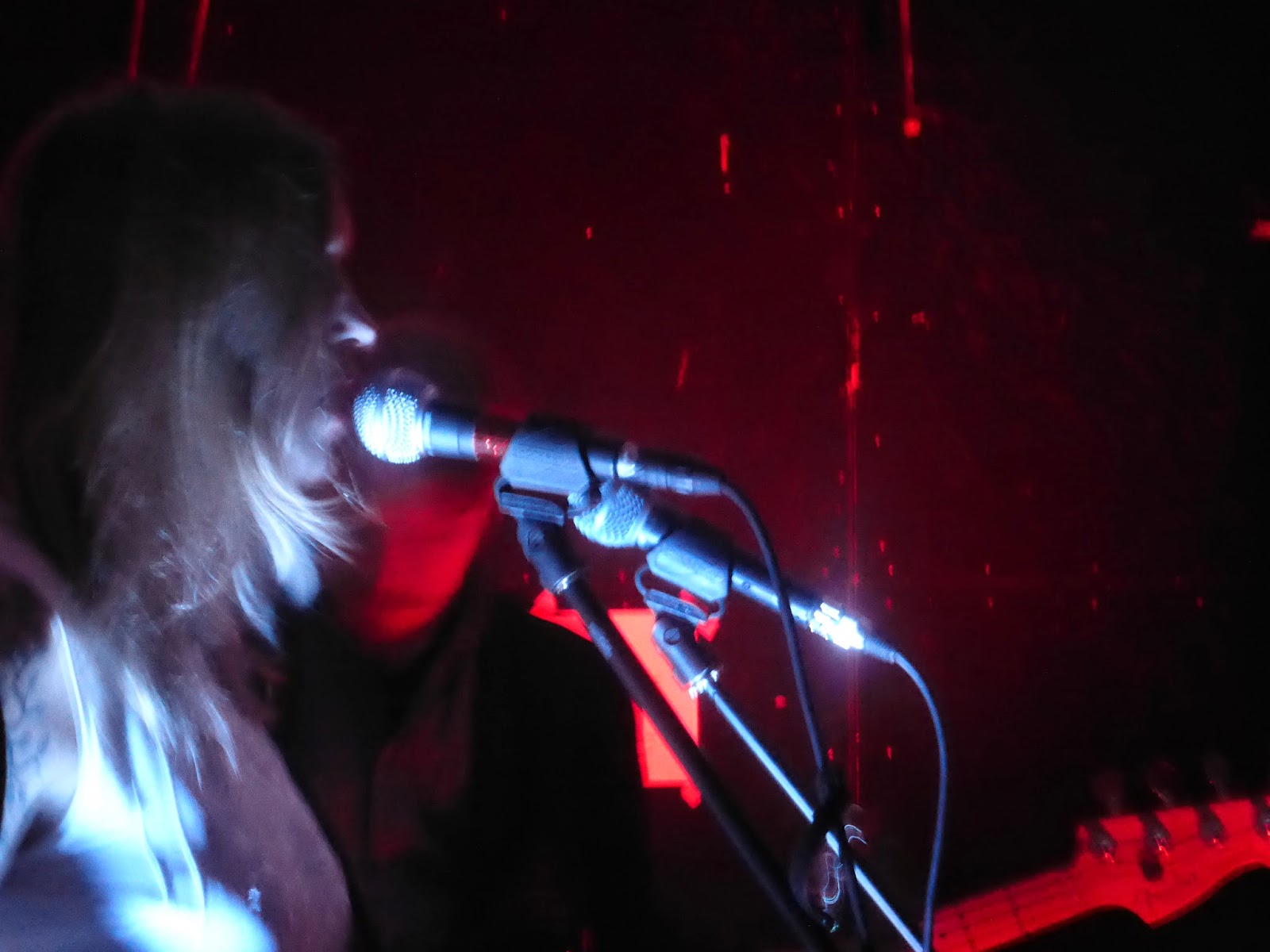 It initially feels a little odd seeing other musicians on stage with Laura. We're so used to be captivated by her one-woman show with multiple instruments and vocals being put through loops to create a stunning mosaic of sound. She's joined by Ami from Forgery Lit on drums and Simon on guitar and violin. You'll be pleased to know that this isn't some kind of Dylan going electric moment, but just another exploration of her sound and the possibilities it holds and her set varies from having all three on stage to just her for parts. So often artists lose what made them special in the first place when they move away from what brought people to them, but fortunately there's no danger of that tonight.

The set is focused around the new material that will make up Direction Of Travel, but naturally delves back into her catalogue. The wonderful Delete sees her solo, maximising use of the loop pedal and striding out into the audience megaphone in hand singing the chorus through it before setting off a siren attached to it. Laura sees She Makes War as an art project and her visuals form an important part of that.

Laura's stories are personal, whether it be the new material or the tracks from her excellent two albums (Disarm and Little Battles). Opener Cold Shoulder is about "a dickhead musician" and she's passionately honest about the subject matter of her songs from the relationship aftermath of The Best, the extended breakdown of another already doomed relationship in Slow Puncture, the string-laden drama of a disastrous encounter of In Cold Blood, the fear of losing parents of Please Don't, the self-critical assessment of the aforementioned Delete and A-Hole to the aching honesty of final song Scared To Capsize. It's that straight talk that endears everyone in the room to her, evidenced later as she dismissively apologises to the gentleman at the back who's telling everyone about some artwork in the venue for playing too loud for his conversation.

By the end of the evening, we all feel like we're friends and Laura's shared with us her worries and fears through the meaning of what she's singing to us as some form of catharsis, whilst at the same time entertaining us with her music. That's a mean trick to pull off.

A word on the venue as well. The Wonder Inn is a new creative arts space project next to Shudehill tram stop. They've installed a great sound set-up for shows like this and the space is ideal for gigs, not too big to lose the intimacy, but big enough for established artists like Laura. It's a friendly atmosphere for a gig and Laura and the bands spoke highly of the welcome they received, so give them your support if you can.


She Makes War's official site can be found here and she is also on Facebook, Twitter and Bandcamp.