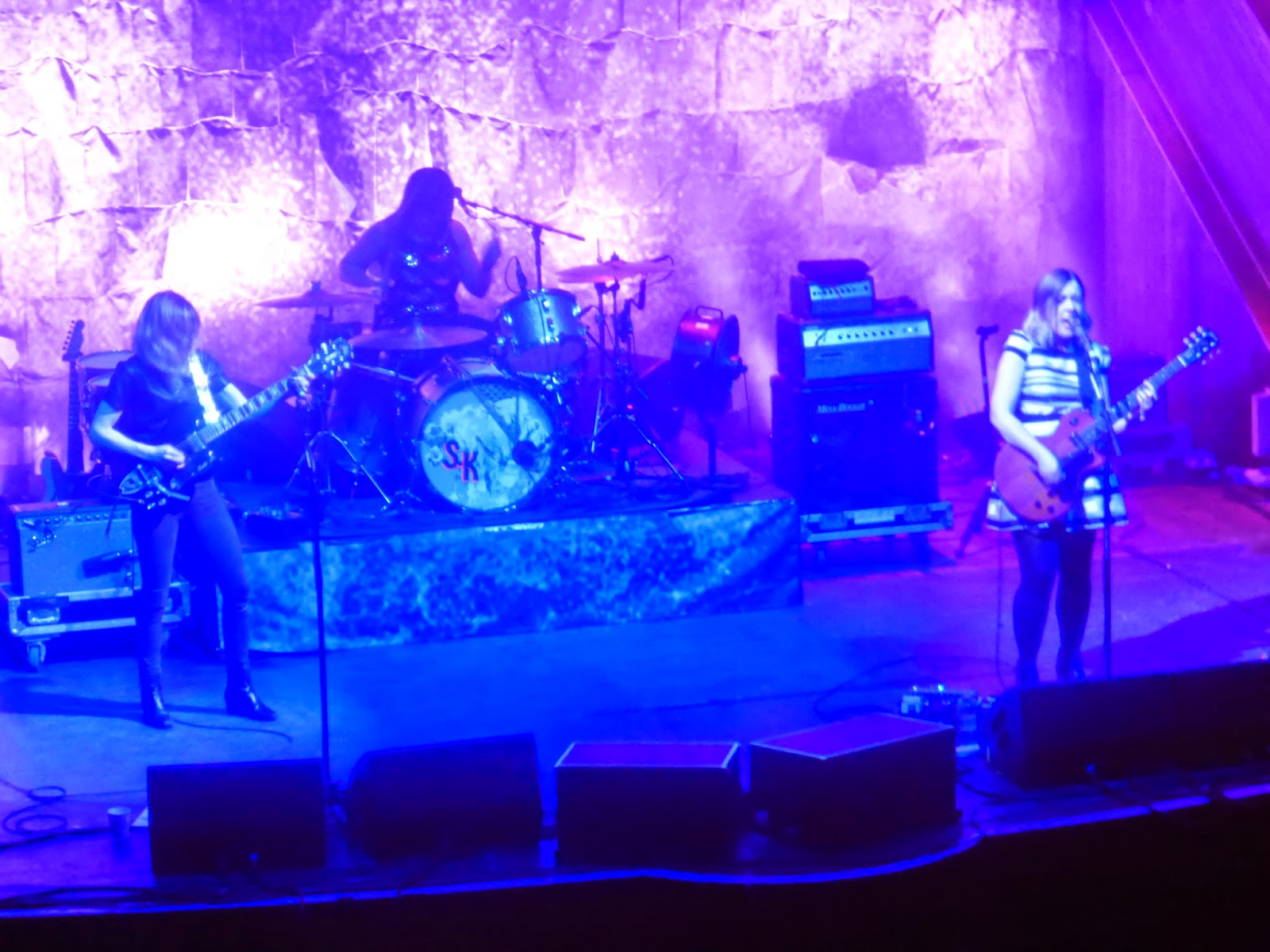 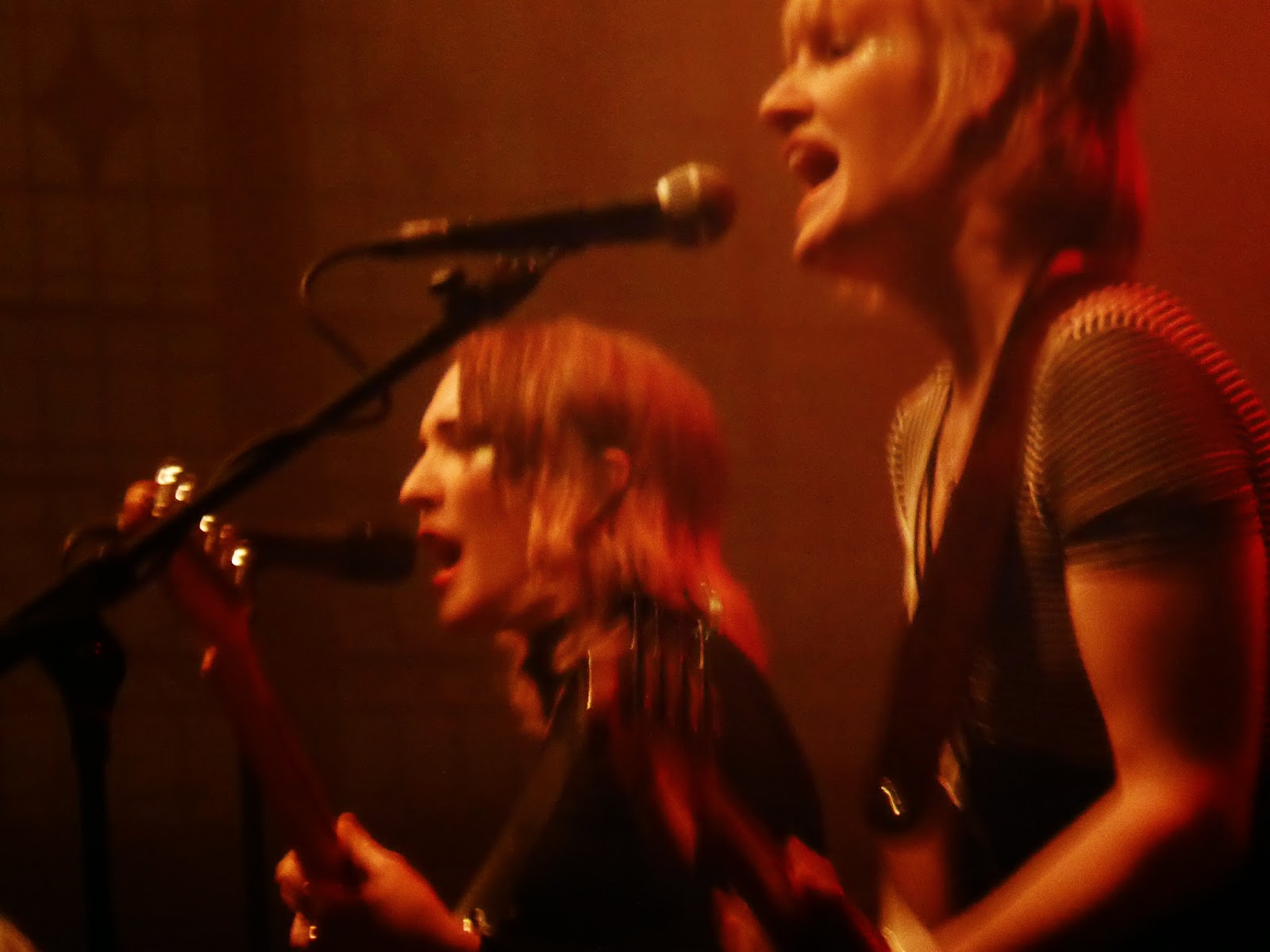 There's two types of reunion, the bad sort where a band comes back, clearly disinterested in the music and hoping to make a quick buck and the good sort where the band rediscover their fire, their love for their legacy but also the urge to make exceptional new music. Sleater Kinney have done just that with their comeback album No Cities To Love and, at a sold-out Albert Hall in Manchester, they mixed tracks from that with crowd favourites from their back catalogue. Local heroes PINS were in support with tracks from their forthcoming album Wild Nights.

Seeing PINS tonight in a venue of this size is a revelation. We've always known how good they were, but we'd not witnessed them fill a room of this size with their noise, their attitude and their personality. Whether it's Faith's vocals, Lois strutting the stage like she owns the building, Becky (who's still standing in for the injured Anna) eschewing effortless cool, newcomer Kyoto a ball of boundless energy and Sophie hammering the drums so hard she trashes the snare at one point whilst dictating the rhythm that's so crucial to so many of PINS songs, they look and sound like they belong up there. 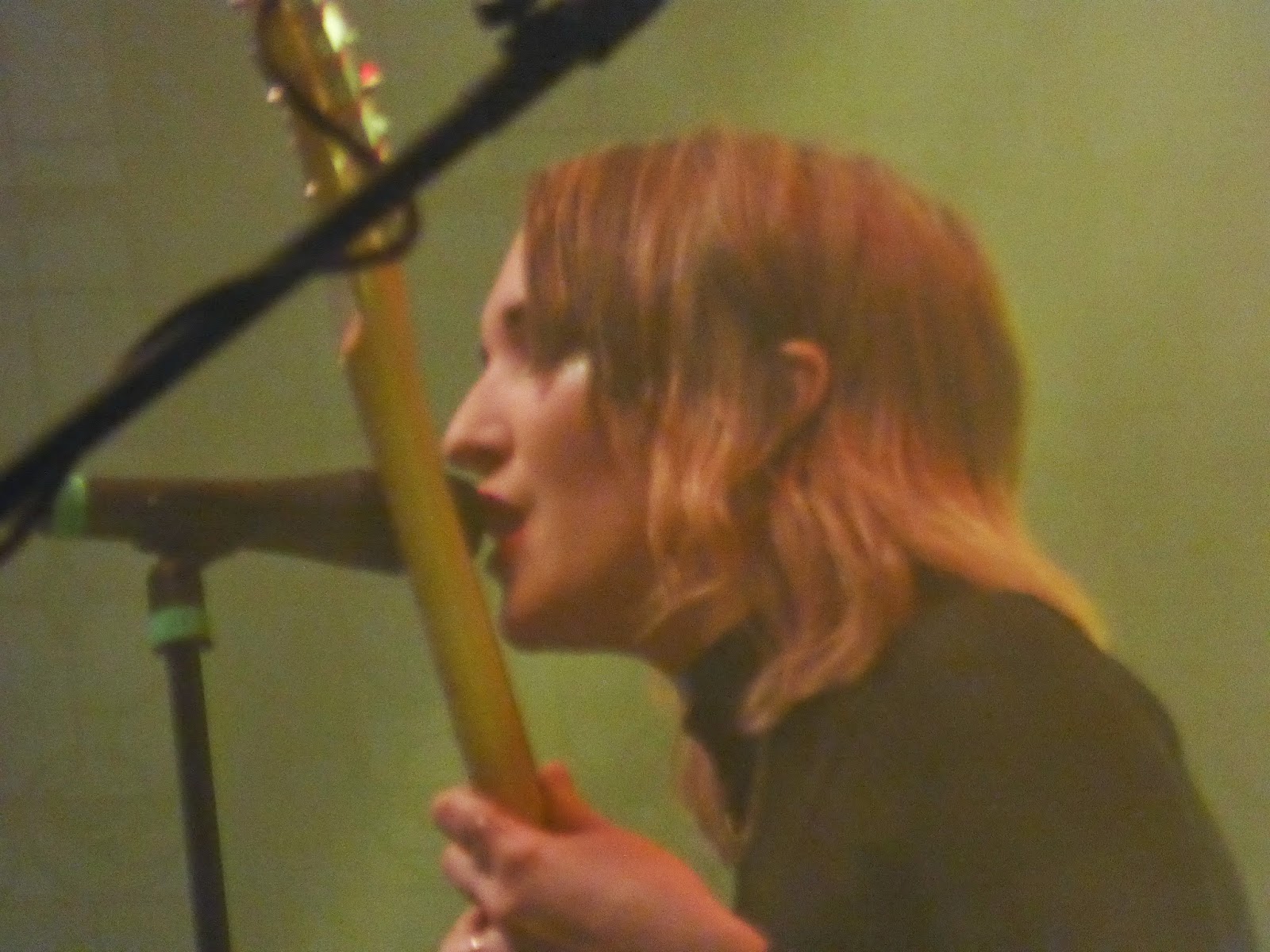 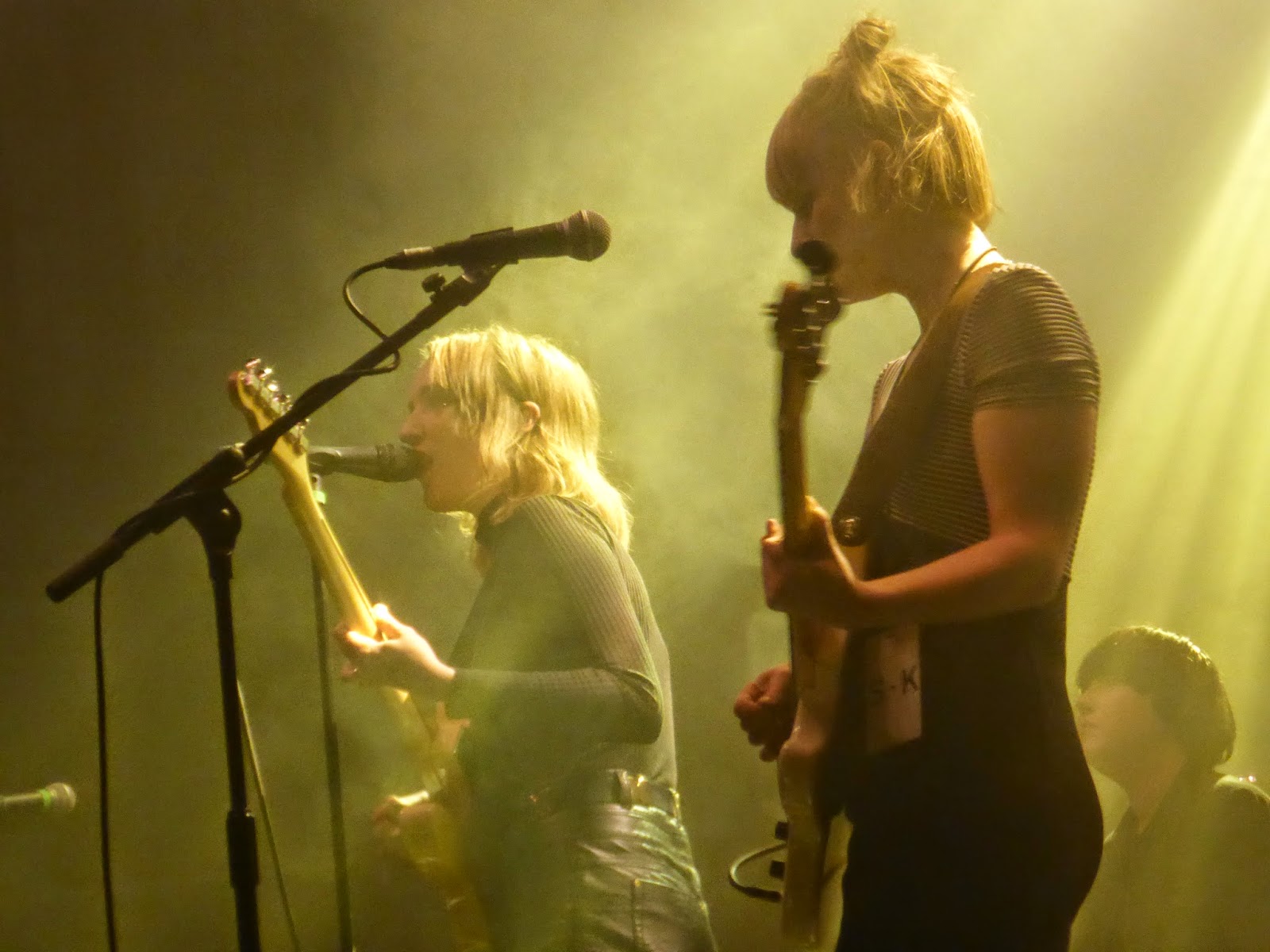 What's also telling is that, despite only having heard the songs once at a preview show at the Eagle Inn a month or so ago, how familiar the new songs sound and feel already. Without losing anything that makes them unique on the Manchester scene at the moment, they've created a record that already feels, without having heard the recorded version, far more accessible than its predecessor.

That's not to decry the likes of Lost Lost Lost, Waiting For The End and Get With Me as they're still as raw and forceful as ever, yet the backing harmonies and the singalong "what would we do when our dreams come true" of Young Girls make it both a perfect single as well as a call to arms, a song of friendship, of being in a gang. Oh Lord and Molly grip the unconvinced by their balls and twists them into submission.  They even close the set by covering The Misfits' Hybrid Moments, two minutes of raw punk energy and then wrapping Cindy Lauper's call to arms Girls Just Wanna Have Fun into set closer Girls Like Us.

PINS need to be playing places like this as the headliner. We need to make it happen. I'd hazard a guess that Sleater Kinney inspired PINS in some way, PINS should be that inspiration for how to be successful on your own terms for young female musicians these days. 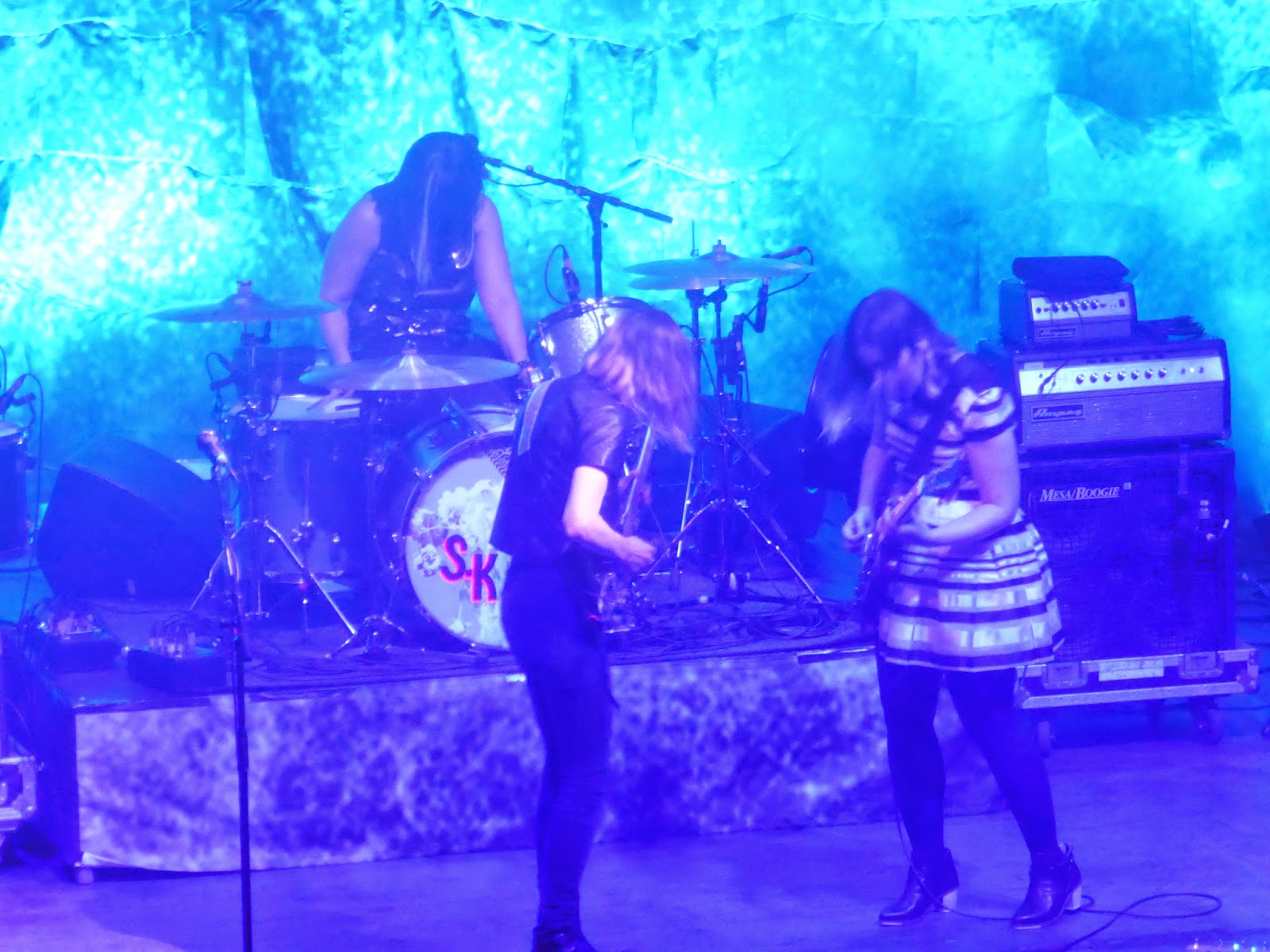 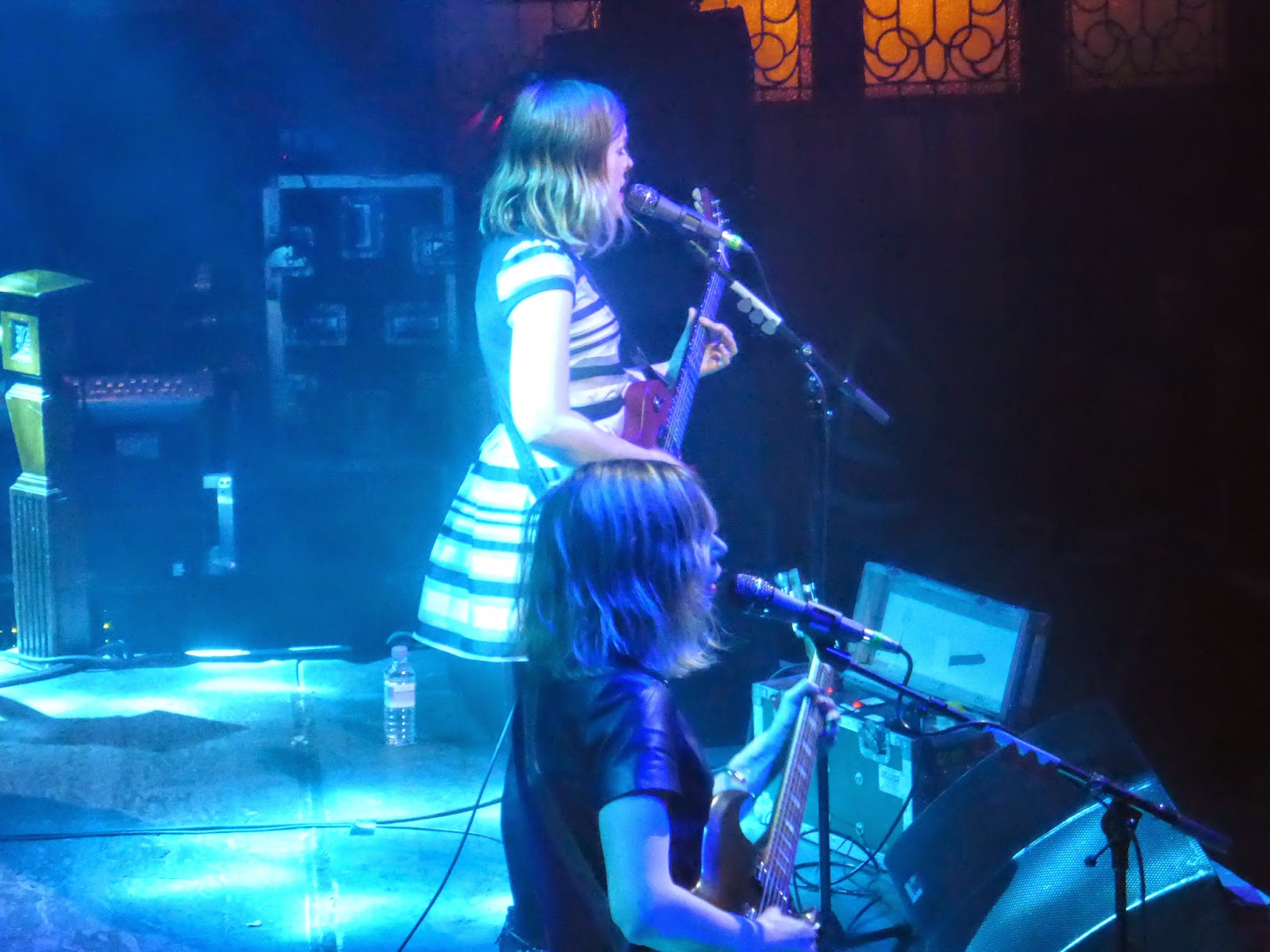 I'll admit to not being overly familiar with Sleater Kinney's back catalogue other than a couple of albums until a curious listen to No Cities To Love and later some hasty revisiting their earlier work which made listening to years of fair to middling Britpop around the back end of the last century time lost. The adulation they get from the minute they walk on stage to the last bars of Dig Me Out threatens to raise the roof of the Albert Hall suggests that not everyone was so remiss.

They cover most bases of their career and refreshing the eight songs from No Cities get as rapturous a response as the rest of the set even taking the brave move of starting with two tracks from it - Price Tag and Fangless. They dip in and out of albums, yet what is immediately evident is how there's core themes to their work and sound without it ever sounding repetitive, an amazing feat over the course of twenty plus songs and that many years. And as much as No Cities is a record very much of the present, the likes of Get Up, Dig Me Out, One More Hour and Oh haven't aged a day in almost twenty decades.

But, as they interchange vocals between Corin's harsher rougher-edged rasp that goes for the jugular and Carrie's soft sweeter hues, often singing two different lyrics at the same time, and tear from one song into the next as Janet's drums drive the rhythm of each and every song, accompanied by Sky Larkin's Katie Harkin in parts, what strikes me throughout is the belief, the honesty and the intensity in what they're doing. There's no posturing or posing, even when Carrie ends up on the floor or Corin starts the wrong song, they're lost in the moment. Every song is performed as if it's their last, whether it's new or old, no half-assed run throughs of crowd-pleasers and the audience responds to both the new and old material in equal measure.

There's no dilution of their message with time, although, apart from them commenting that nothing's changed while they've been away as they come back for the encore, that message is in and is their music. They are the living embodiment that you don't need an instrument between your legs to play the guitar. From the balcony we can see three girls together at the front, probably too young to have seen them first time round, singing every word, hanging on every note and each one of the band acknowledge them in various ways during the set and encore. That's the power of what music should do.