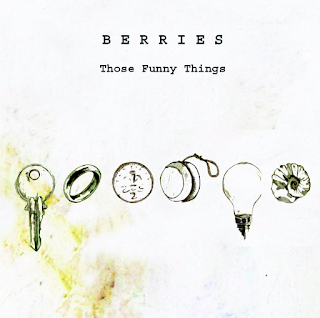 Back in July we previewed Sirens, the opening track on Berries' debut EP Those Funny Things on Shell Zenner's Amazing Radio. The EP is now ready to be released to the world and to our delight Siren proved to be just a taster of the wonders of the other five tracks.

What Siren does is lay down a marker. Its crisp but still raw production allows both the song's signature guitar riff and dancing bass line to shine brightly, but not to prevent Holly's expressive vocals to take centre stage. As a one-off single it should garner them enough attention with its radio-friendly sound, but every song on Those Funny Things has the potential to break them to a wider audience.

Waiting is a song about relationships, a recurring theme across the EP its opening  "a strange game you're playing, it's a two player game but the focus is all on you" delivered with no lack of vitriol before a gorgeous soaring chorus comes in out of nowhere. Add in the exit of the breakdown where first drums kick in with stadium sized singalong potential and then a cutting guitar riff delivers the killer blow.

Never Smiled Once uses the same techniques to disarm us. Guitars are strong and forceful but used liberally rather than overpowering the listener whilst Holly picks over the bones of a relationship that was doomed to failure. Allowing each of the band space to make their mark is a key component of why this EP is such a success.

The title track sees Holly declare in the chorus "I like you for those funny things, I'd like to be there waiting for you at night" whilst the end of the song again has the potential to be extended into a singalong live. What Berries do so well across the whole EP is demonstrate pop sensibilities whilst creating six songs that lay bare a love of great guitar music - they keep things simple because most of the time that is the best approach.

Simple doesn't mean repetitive though nor does it mean a lack of impact. On the contrary, it makes moments like when Holly sings "losing you was the easiest decision to make" on Lights feel like the honest and open laying bare of everything whilst the guitar dances away in the background to its own merry tune. It's an approach that'll have you hitting the rewind button at the end of the song.

The EP concludes with Written In Paint, the theme of relationships again at its core but this time delivered with a little more vitriol - "I honestly have all your secrets to tell, I won't hold back."

Those Funny Things is an absolute triumph, six great songs that it's impossible to pick a favourite from as they've set the bar so high. Their direct approach, the lack of studio trickery and the raw open honesty of both the lyrics and their delivery and the uncluttered instrumentation combine to make a record that makes a striking first impression that gets stronger with each listen. Berries are not to be messed with but they might just become your new favourite new band.