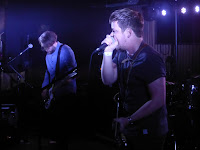 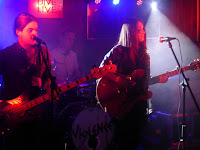 CTRL is a new live music club night launched on Thursday claiming to showcase the city's best live bands and touting The Charlatans' Tim Burgess as guest DJ. In Ist Ist and Louie Louie they at least deliver on the band side of the deal.

The venue's completely unsuited for live music. The site itself was pretty universally unloved in its previous incarnation as Moho, but Dive has few if any redeeming features as a venue - no stage, a set of stairs to the street next to it, a roof that can't be more than ten feet in height that means the sound and lighting men are fighting (and they both do a great job) a battle with the basics. To top it off add in the ludicrous bar prices and poor selection (£4.80 for a pint of the average Coors) and a guy who we suspect was the venue appointed photographer (he embarrassingly went running to the bouncer like a bully does to their mum when challenged) barging both audience and other photographers out of the way and imposing himself on the band inches from their faces at the front and on stage at another plus taking an inordinate and intrusive number of audience photos ignorantly oblivious to the fact he's pissing everyone else off around him. 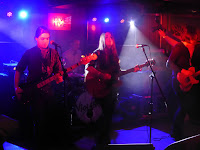 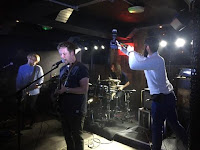 But to the music. Louie Louie are the first band we see and they confirm the massively positive impression they left us with last time we saw them. Blossoming as a band, much tighter as a live unit, the likes of Nostalgia, Carry The Man and their set-closing The Lighthouse are songs that deserve a bigger audience, rich in insistent melodies and delivered with an intensity that combats the sound issues. In Rita they have a vocalist whose brooding smoky intonation adds an extra edge that makes them stand out from the crowd.

You could forgive Ist Ist for being on a comedown from their summer festival stealing set at Ramsbottom last time out, but there's no such nonsense. Starting with Things Will Never Be The Same Again, a song with one line repeated over and over again that shouldn't really work anywhere near as well as it does. But that's why Ist Ist have no peers at this game. The likes of "our radio friendly single" Night's Arm and its predecessor White Swan are both uncompromising but also branded with jagged hooks and razor sharp melodies that stab at you like a crazed psychopath with broken glass through the cacophony they create. Animal, Rats and an impossibly ferocious Emily all have the same explosive impact. 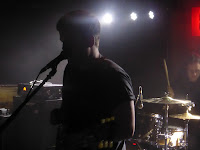 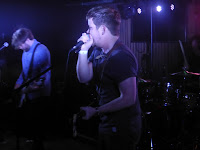 They deliver this with an impressively impassive lack of showboating, lost in their own world, perfectly atuned to each other's wavelength. At one point Adam ends up on his back on the floor and Andy mimes sitting on him and later on Adam hands his mic stand to the front row for the set closing Rats. There's something really special brewing with them, a band that feels like they're on the brink, their uncompromising approach a weapon rather than a barrier.

Ist Ist and Louie Louie are two of the very best emerging bands in the city at present and it's fortunate that neither are fazed by the hand they're dealt tonight. We're all for new music venues opening up and creating opportunities for bands, but, if they smack of a desperate attempt to drum up midweek trade in a venue completely unsuited to live music and used a means of collecting photos for their website, we'd rather they didn't bother.