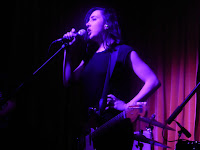 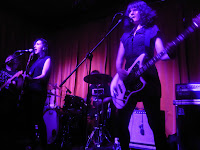 With the launch of their third album Full Of It earlier this year, Summer Cannibals made a significant step-up both sonically and in terms of reach having signed to cult label Kill Rock Stars. This tour of the UK ahead of supporting The Wedding Present in Europe is their first visit to these shores and despite a low turnout for a number of reasons beyond their control, they delivered a set that delighted those of us who'd been waiting years for them to come to the UK.

There are plenty of things conspiring against Summer Cannibals tonight. First of all, Tuesday nights are not the best for intimate small gigs crowd-wise in Manchester, secondly the promoter doesn't seem to have booked any support acts to help boost the crowd and the tickets at £10 on the door are therefore expensive for a band that no one in town is likely to have seen live before. It's to Summer Cannibals' eternal credit that the thirty or so gathered folk are treated to a set that lacks nothing in intensity, power or connection with the audience despite that turnout.

Full Of It represented something of a watershed for Summer Cannibals, the softer sounds of their first two albums No Make Up and Show Us Your Mind have been replaced by a harder more direct sound and this is taken further in their live show. Dials are turned up, pedals are pressed to the floor and hair flies everywhere. Summer Cannibals are a proper rock and roll band, make no mistake, but one armed with the songs to back up their bravado.

As you'd expect the set is culled from Full Of It, but they open with a new song with an extended instrumental intro that feels like a natural progression without moving too far away from the ingredients that made the album a game changer for them and which sets the tone for the rest of the night. They follow it up with Just A Little Bit, which sees Jessica somehow remove her jumper mid-song without missing a note or a word, and the song feels even more powerful performed live and that continues throughout. I Wanna Believe and Full Of It are dispatched in a whirlwind of guitars and drums, fabulously on the edge with that raw energy that the Pixies had in their heyday around Surfer Rosa and Doolittle whilst The Lover has a stop-start drum pattern to it that almost acts as a call and response with Jessica's vocals. The small but attentive crowd are rightly transfixed.

Say My Name, the lead track from Full Of It, is the big single in another time and place with its simple singalong chorus and the vocal harmonies that follow it and live it does nothing to dispel the impression that all that was missing was the exposure to a wider audience before it runs into the vitriolic Fallen. Simple Life, the album's final track, is another song that could see them reach a crossover audience, Jessica's vocals couched in a warm blanket of guitars that then take over and let loose. Not Your Turn is the one song to survive from Show Us Your Mind but benefits from the harder makeover in the band's sound since that record, Devon's drums dictating the military rhythm and pace of the song. There's no stopping them now, no pausing between songs as they conclude with the double-barreled assault weapon of Go Home and Make Up. 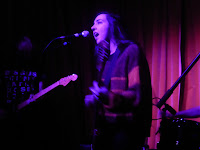 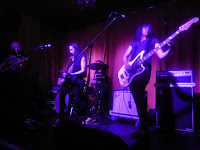 They're an incredible band to observe as well as to listen to. Guitarist Marc looks like he's holding a red hot guitar such is the way he looks perpetually on the verge of dropping it, but the riffs that he lets loose tell a different story whilst bassist Jenny struts effortlessly cool, sometimes aloof, but when she adds backing vocals the contrast between hers and Jessica's adds something a little more pop to the mix. Jessica is on good form, joking about her earplugs flying out and why they've only got six cassettes of the album with them ("it's either sold well or the distributor said to just give him ten", getting phased by hair in her mouth and that no one replies when she asks if we're working tomorrow because we're all freelancers like back home in her native Portland.

Given the performance Summer Cannibals put on, it's disappointing that there's not a better turn out. A show this fearsome with songs of this calibre should be packing out venues bigger than this, but for some reason they've not yet pushed the buttons that secure them the press coverage and bring in the cool kids that flock to far lesser bands. It'd be a travesty if they don't come back to Manchester because of the organisation of the show as this was one of the best live performances I've seen all year, a band clearly in love with what they do and armed with a set of songs that back up their musical ambition and the raw energy of the live performance. They told us to tell our friends, so I'm telling you.

They play The Garage in London tomorrow (Thursday 13) before heading to Europe for three weeks with The Wedding Present.