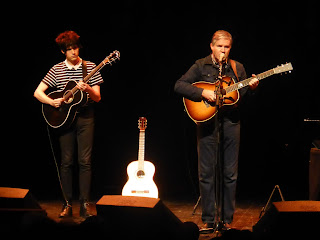 With the success of last year's Collected Recordings 1983-1989 spanning Lloyd Cole's career with The Commotions and a forthcoming boxset of similar magnitude covering his early solo albums early next year, there's no better time for Lloyd to take a look back over his career and perform this series of retrospective shows. A two-set performance, the second with his song William, covered most bases from 1983 to 1997 with old favourites as well as a few less well-known tracks to a packed attentive audience in the beautiful surroundings of the Lowry's Quay Theatre.

"When I tried to have neutral pictures taken, I always looked angry" is one of the anecdotes that Lloyd tells during the course of tonight, and it would explain why a man with a dry, but self-deprecating and intelligent, sense of humour might have been misconstrued over the years. As he recites stories between songs, he's not afraid to not take himself too seriously and laugh at himself, making reference to his ages, the wings growing from his hair when he takes his glasses off, his eyesight failing and the need for an oxygen tank once he finishes the quickfire lyrics of My Bag. It's impossible not to warm to him when he jokes that eleven people would need to die before he could publish his memoirs or when he tells us that if we don't sing along to Jennifer She Said which concludes the first half of the set that we'll make him feel old and sad.

Most of the songs he plays should need no introduction. Age and the stripped-down format of the evening have been kind to them and a quick look around the theatre suggests that these songs (the Commotions ones at least)were at the very heart of the bedsit student existence of many of the crowd three decades ago. The songs from their debut Rattlesnakes, which features heavily, get possibly the warmest reception due to familiarity, but it's the later singles - Jennifer She Said, Brand New Friend and Lost Weekend - that get the audience singing along perched on the edge of their seats ready to rise if a brave soul takes the first plunge and stands.

The real revelations are elsewhere though. To us, his self-titled solo debut album is a lost classic and it's represented by four of its strongest songs tonight, No Blue Skies and Loveless in particular standing up against anything else he did before or after. There are smatterings from the other solo albums too, the cheerful staunched optimism of So You'd Like To Save The World and three songs (Love Story, I Didn't Know You Cared and Love Ruins Everything) from 1995's Love Story, that show that his creative spirit never diminished even if his commercial returns did over time.  There's also the wonderful Lonely Mile, a song that sneaked out almost apologetically at the end of The Commotions' lifespan on the From The Hip EP and a simple plaintive cover of Prince's Sometimes It Snows In April. 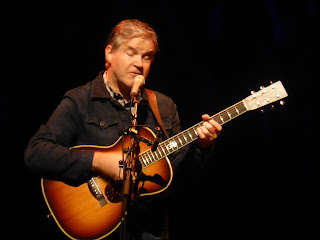 The second half of the set allows Lloyd to introduce his son William to accompany him on the songs on a second guitar. He jokes that he needed someone who looked like a younger version of him to help him out, look after him and carry his bags, but the second guitar allows the more upbeat songs that make up part two to bloom further. They spent plenty of time tuning between songs to allow Lloyd to engage with us some more, reminiscing that it's over twenty years since the youngest song - No More Love Songs - was released and joking that Undressed was when he invented post-feminism.

All in all, we get twenty-nine songs in the two hours and a real insight into a decade and a half of one of the nation's finest songwriters. It's only when the songs are laid down side by side like this that the size and longevity of the legacy can be fully appreciated. They're delivered with love as well as if revisiting them for the two boxsets has rekindled Lloyd's spark and love for these songs which he's often shied away from playing in favour of new or less well-known material. As he leaves to a well-deserved standing ovation, that legacy is confirmed and undeniable.

Lloyd Cole played Patience, Perfect Blue, Rattlesnakes, Loveless, Sometimes It Snows In April, I Didn't Know That You Cared, Love Ruins Everything, Lonely Mile, Pretty Gone, My Bag, Butterfly, Downtown, So You'd Like To Save The World, Jennifer She Said, Don't Look Back, Mr Malcontent, Like Lovers Do, Are You Ready To Be Heartbroken?, Cut Me Down, Charlotte Street, Perfect Skin, 2cv, Undressed, No Blue Skies, No More Love Songs, Hey Rusty, Brand New Friend, Lost Weekend and Forest Fire.