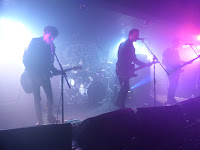 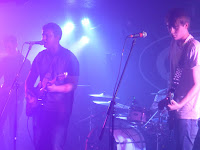 A sold-out show at King Tut's is no mean achievement for an unsigned band, but Edinburgh's The Phantoms did just that for the Glasgow instalment of This Feeling's club night. We joined a boisterous beered up crowd to watch them deliver a powerful set of big straight down the middle rock and roll punches after a great set from Glasgow's IBG.

We walk in just as IBG are starting their set and they trade in big powerful emotional songs including a new one that recent father Liam dedicates to his partner in the crowd. They're an exceptionally tight live unit with songs with robust, powerful structures that tug at the heartstrings. Their final song No Space For Angels is a huge tune, expansive, ambitious and instantly memorable and whilst it's the highlight of their set, the rest of it is built on similar foundations, one song that talks of old fashioned revolution being another highlight. They get a rapturous and well-deserved reception from both their own fans and those of us who they're new to. 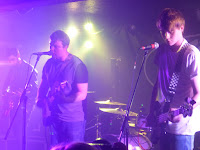 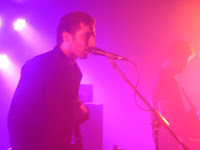 The Phantoms don't mess around. Everything's turned up to the max throughout and they never take their feet off the pedal. Whilst there's no musical revolution in their set, each and every song they play is based around huge riffs, powerful persistent drums and the natural strong voice of front man Colin and is lapped up by a fervent crowd that he orders to "clap your hands, tap your toes, do whatever you want" over them yelling constantly at him and the rest of the band. They do just that, losing themselves in the wall of sound that's coming at them and in the alternative Scottish national anthem of "here we, here we, here we fucking go". It feels like we've intruded on a private party at times, especially as the dying strains of final song Revolution ebb out, but been made more than welcome such is the all-encompassing love both on and off the stage.

They've already got an impressive set of songs in their canon, there isn't a weak one amongst the nine songs that they play. There's a new song second up in their set, Wasting Time and I Don't Care that really stand out though amongst them. It's very rare to catch a band that wears their influences so loud and proud on their sleeves without sounding like a pale watered down pastiche of them, but Phantoms  are very much their own men. We leave impressed.

Email ThisBlogThis!Share to TwitterShare to FacebookShare to Pinterest
Labels: IBG, The Phantoms