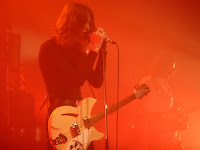 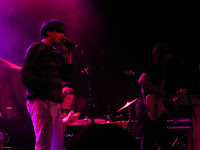 The Blossoms bandwagon rolled into Glasgow on Saturday night with another sold out show at Glasgow's ABC mixing tracks from their self-titled debut album with some deeper cuts from the accompanying singles. The night was opened up by the riotous Cabbage.

"We're from down south. I never thought i'd say that. It's fucking depressing." Ladies and gentlemen, welcome to the world of Cabbage. It's 7pm and the ABC is sparsely populated due to the need to turf gig goers out into the night by 10 to suck in another set of punters and Cabbage's admittedly low profile outside the North West. At some point hundreds will claim to have been here as they did when Blossoms played to a similar size crowd with Inspiral Carpets nearly two years ago.

Cabbage don't care. "It's like playing a funeral" Lee says at one point and it's not until Dinner Lady that the crowd starts to fill out and perk up. They still don't care. Lee jumps down off stage during Indispensible Pencil startling the bouncers as much as the kids on their Instagram. 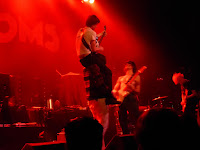 Some joker tells Lee he looks like Tim Burgess, Joe says he's Jonny Vaughan's fitter brother. In his jumper, Lee looks more like a Bummed-era Shaun Ryder and there's an element of the chaos of the Mondays to Cabbage. Except they can play and instead of singing about gobbledygook, they sing about the NHS, Savile, capitalist wars and American politics. As they finish with the bonkers Donald Trump baiting barndance of Free Steven Avery and look over at their genius Cock Piss Cabbage t-shirts, we might be the only people in the room that love them. But that'll soon change.

By the time Blossoms make it to the stage the room has filled out and there's an expectancy in the room. Tom asks at one point if any of the ten people who saw their Nice N Sleazy debut headline show just up the road and it puts into context just how far Blossoms have come.

This is no partisan hometown crowd like Manchester the previous night, but that doesn't dilute the response they get one bit. The middle of the crowd becomes a heaving mass, girls climb on their boyfriend's shoulders as they start with the killer trio of At Most A Kiss, Cut Me And I'll Bleed and Blow. Their debut album almost feels like a greatest hits and it may well become a millstone around the neck of new material the way St Jude has for Courteeners, but that's for another day. On the brink of their first US dates of their own, these songs are putting the world at their feet, making the ABC a stepping stone to bigger things and they've done it so far with a grace and humility that bands tend to lose with success. 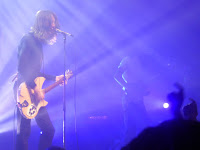 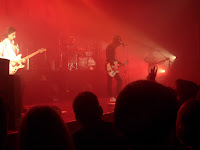 It's not just about the singles from the album though. Polka Dot Bones and Across The Moor could quite easily have been on the album and not felt out of place, whilst Texia, once the electronic weirdness that's been tagged to the start is played out, is a huge shimmering delicious slice of keyboard laden eighties influenced pop that steals the show and You Pulled A Gun On Me, the song that kick started everything, still has that unmistakable immediacy of the hook line that the crowd turn round and chant back at them.

They're not afraid to play around with the set either. Smoke is reintroduced in place of the more fragile Onto Her Bed and shows off the darker psychedelic side that stood out on their earlier EPs and they shuffle others around to give a more natural flow to the set. Tom adlibs throughout, "Joe looks like Jon Snow, yes he does" raises a smile when he drops it into Charlemagne, the riotous rousing finale to the night and he changes Blown Rose to reference "the stately homes of Scotland" to huge applause.

He dedicates Charlemagne to Gary Watson of The Lapelles who tragically died  a few months ago and the crowd chant his name before going wild as that squiggly defining keyboard kicks in and the floor is reduced to a mass of heaving bodies.

Blossoms played At Most A Kiss, Cut Me And I'll Bleed, Blow, Polka Dot Bones, Smashed Pianos, Smoke, Getaway, Honey Sweet, Blown Rose, My Favourite Room, Texia, You Pulled A Gun On Me, Across The Moor, Deep Grass and Charlemagne.