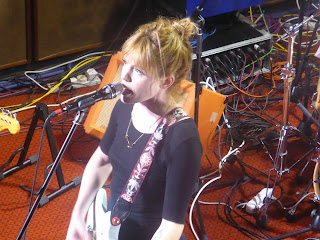 Currently on a UK tour and fresh from an appearance on Later With Jools, Haley Bonar and her band played an eight song set in the intimate surroundings of the old Granada Studios building in Manchester, broadcast live on internet channel Low Four.

We're ushered into the studio where we're dispersed to the floor and balcony to provide the studio audience for the live performance and given our instructions on when to clap (like at the end of the songs as if we've never been to a gig before) and once the introduction is done, the first five songs form the live broadcast before Haley treats us to three further songs amidst confusion in both band and audience as to what's being recorded and what isn't.  It is a slightly surreal situation as the lights are up and the cameras and lack of stage mean we're some distance from the band, but what that does do is allow us to take in the songs, which save for a cover of The Crystals' Then He Kissed Me and No Sensible Man from 2014's Last War, all come from Haley's magnificent latest album Impossible Dream.

Kismet Kill lays down an impressive marker first up; the five-piece band translating the songs from the record to this slightly unusual environment without losing any of the delicious melodies or that sense of underlying playfulness. Kismet, Your Mom Is Right and Stupid Face nod to the likes of Belly and Throwing Muses but without ever feeling derivative. It's impossible not to warm to the infectious energy and the genuine lack of pretence that Haley puts into the songs even in this unusual set up and when things are stopped to allow the recording to work properly. Jealous Girls' church organ style keyboards feel impressively imposing and add even more gravitas to one of the album's stand out tracks.

Their take on Then He Kissed Me is something special, heavy on keyboards and with her own mark well and truly stamped on it as all great covers should. Confusion reigns as No Sensible Man is stopped to start it again to help the crew filming and because of some irritating feedback, but the only track from Last War reminds us that Haley is not a new kid on the block and hopefully her recent exposure will also lead people to her back catalogue as well. They finish with Called You Queen, one of the songs they performed on Later With Jools, and the highlight of the set, a song whose own momentum drives it on like most great alternative pop songs. And that's what makes Haley Bonar quite special; there's an intuitive feel for some of our favourite artists in what she does, but it's never more than a sprinkling of influence and she stands at eye level with them rather than looking up.

Haley Bonar played Kismet Kill, Your Mom Is Right, Stupid Face, Jealous Girls, Better Than Me, And Then He Kissed Me, No Sensible Man and Called You Queen.