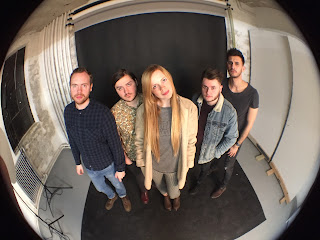 London five-piece Heavy Heart have spent 2016 releasing a song a month building their name and reputation steadily with each song showing a different side of them. We spoke to lead singer Anna ahead of their support slot with LIINES on Saturday about how the band came together, why they took the Wedding Present approach to releasing songs and what they've got planned for 2017.

First of all, can you introduce Heavy Heart and tell us how you got together.

We're Anna, James, Patrick, Craig and Adam, an alt/dream rock band from London.  I originally started writing songs on my own, but didn't really think about doing anything with them until I got talking to James and Patrick and they were into the ideas.  We got together as Heavy Heart in 2014, initially as a three-piece and then as a full band when we got booked for a festival that summer.

Where did the band name come from?

Heavy Heart was a moniker I had identified with for quite a while before the band existed - it seemed to sum up my own character but also the two sides of how the music sounded.  There's a gentle sense of melancholy, of disappointment and disillusionment which runs through our songs, but there's also a harder side to what we do - a quiet, simmering rage.

Do you have one songwriter in the band or is it a collaborative effort?

I often come up with the core of the idea myself - basic chords, melody, a few lyrics - and then I work with the band on developing the sound, both live and in the studio.  Patrick, who plays guitar, produces all our recordings, so a lot of the character of the music is formed at that stage too.  Once we've got the heart of the idea, the rest is very collaborative.

You're releasing one song a month this year, an interesting concept, what made you choose to release songs this way?

It wasn't really something we'd planned to do, but we started and couldn't stop.  Late in 2015 we recorded what would become the first three songs we released this year.  We'd originally planned to release them as a follow-up EP to 'This Season' which came out the year before, but we'd noticed that you get about as much attention for a single song as you do for an entire collection, and we didn't want any of the tracks to get lost, so we decided to spread them out one a month.  Once we started, the response was really good and people seemed to be really into the idea of these regular singles, so we just carried on.

It's been really hard work, and sometimes a challenge to get the song out each month, because we're writing and recording as we go.  But it's great because it means we're never dormant, and we're always releasing brand new music which we're excited about.  It's also been a really good discipline for us as writers - it'll be strange to go back to recording a bunch of songs and then putting them out when they're already a few months old and we're bored of them.  It's kind of giving me the fear...

Is the plan to release the songs together as an album or do you have different plans?

Yes, this is the plan!  We will be releasing all twelve songs from 2016 as a collection ("album" seems to have too much weight to it) in Spring 2017.  It's going to be a really special release with a beautiful, limited-edition vinyl counterpart, and should be a great document of what we've done this year.

The songs are quite different in style. Was that deliberate or just a natural reaction to your influences?

I think it was just a natural process really, particularly given the way we've been working - writing and recording the songs within the month itself.  I guess this has meant that as we've picked up new influences, new instruments, new inspiration, the sound of the music has developed in real time.  This has also been informed by playing more live shows and developing that way too.  But I think there are certain threads which run through all the songs and tie them together.  There have always been two sides to our sound - the 'heavy' and the 'heart'.  Sometimes a song is more one than the other, and sometimes it's more of a blend.  But I wouldn't want to write the same song twice - that would feel like old news.

You're supporting LIINES this weekend for their single launch. What are your plans after that?

We're so excited to be supporting LIINES - they're dear friends of ours but so far we've never had the chance to play together.  Leila (who plays drums in LIINES) and I used to be in a band together when we were kids, so it's actually a dream to be sharing a stage again.  They're amazing, I can't wait for their album.  After this show, we're releasing our next song (on Monday 31st - Halloween!) and then we have two more London shows (Bedroom Bar on 3rd November and The Monarch on 10th November) and then we're back to the studio to work on the next song.  It's relentless!

If you had to describe Heavy Heart to someone who hadn't heard of you, where would you start?

This is always a tricky question so I normally resort to using what other people have said about us!  If I made a chart of all the words which have been used to describe our sound, I think the front-runners would be "melancholy", "dreamy", "shoegazey", "alt-rock".  Someone once used the word "transcendental" too - I like that...

All songs from this year's series of songs can be found on their Bandcamp page where they can be purchased.