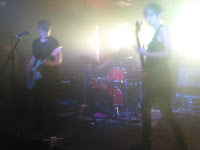 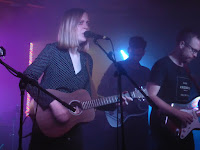 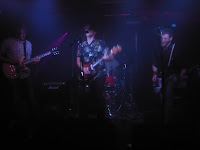 LIINES launched their new double A-side single Disappear / Be Here with a triumphant show at Birthdays in Dalston, London on Saturday night supported by Heavy Heart and Lull. Armed with the confidence of universally positive reviews of the single and with a couple of new songs, they cemented their growing reputation as one of the most raw and exciting live bands around.
The evening is opened up by Lull and the four-piece's six song set leaves a very promising impression indeed. They open with the title track of their recent Nouvelle EP (oddly it's the only song they play from it) and it's immediately clear that Lull give absolutely everything to their audience. Their songs, The Sun and set closer Bubble Tea (from their debut EP) in particular, are ambitious in their scope whilst retaining a love of classic guitar music that make the shoegaze references we'd read about before hand seem a little misplaced. The highlight though is the majestic Dead Or Alone which is full of wonderful stop start moments, a delicious vocal from Jon and a lush melody that reminds us of prime Teenage Fanclub. 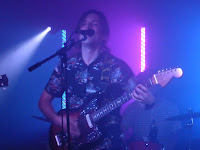 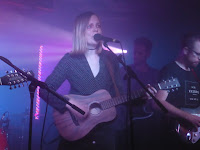 We'd been looking forward to seeing Heavy Heart for a while and were delighted when they were announced as main support for the show and they didn't disappoint. Playing a selection of the songs they've been releasing one a month throughout the year, they utterly disarm the audience with melodies that make our feet sing and our hearts flip. Anna's vocals are one minute sugary sweet, the next made of a steel that tell you not to mess with her. Songs like Fruitfly, with its ear worm "be yourself, by yourself" tag line and What Became Of Laura R where the chorus exclaims "I am not afraid of all the disaster always surrounding me" are cases in point whilst the very first song they released in their song a month series Time Will Standstill has a wonderful melancholic melody to it that makes you feel all warm inside. They get a great response at the end of their set and deservedly so.

There's a growing sense of anticipation as LIINES take to the stage and we're immediately blown away by the power they generate from such modest tools at their disposal. There's no banks of effects pedals, no guitars to changeover after every song, LIINES use just the base raw materials of guitar, bass and drums to create their magic to phenomenal effect. Songs sound huge, never outstay their welcome, they jump from one straight into the next not pausing for breath whereas as a short burst of three songs together comes to an end, the intensity of Zoe's singing means at times she needs to.

Be Here and Disappear are dispatched early in the set and sound even more thrilling, life-affirming and vital live than they do on record, but LIINES have got a whole set full of songs that generate such a reaction. Cold must be nailed on to be a single at some point in the future, the guitar riff that opens the song and its chorus "It's cold and I'm lonely, it's cold and you're nowhere" will fight for the space in your brain that recalls it over and over again, whilst Find Something, debuted tonight, and set opener Shallow show that the sessions for their album are bearing fruit too. 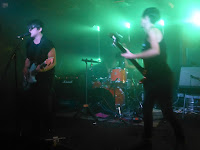 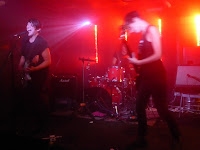 They finish with Never There, the song that brought them to a wider audience twelve months ago, and it feels like it should be one of those indie classics that fill a dance floor with the first three beats. It's a great introduction to the band, but what they're demonstrating more with every show and every new song that they reveal is that they're one of the most important bands around at the moment. They demonstrate the power of raw music above image and effects, the victory of substance over style, of honesty over compromise. With a label that understands them, an astonishing live set, an album in the works and a growing momentum in the online press, it feels like piece by piece LIINES are going to get the recognition they deserve.

Twelve months ago, we wrote for Louder Than War "LIINES are the hardest band in town. Armed with just three instruments and a voice they’re waging war with music as their weapon. Resistance is futile." It's time for you all to submit. Now.

To support the launch of the single they play the following shows : Stoke The Exchange (November 11), Derby The Hairy Dog (18), Manchester Aatma (26) and Leeds Verve Bar (December 2).

Heavy Heart's website can be found here and they are on Facebook and Twitter. All songs from this year's series of songs can be found on their Bandcamp page where they can be purchased.