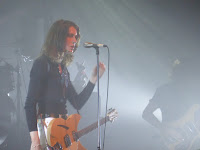 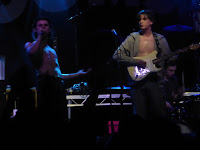 From the likes of Sound Control to the Academy and two weeks at the top of the album charts in two years is some journey for Blossoms, but as the last strains of Charlemagne rang out around the aircraft hangar that is the Academy, the overwhelming feeling is that this is just another stepping stone on their unstoppable rise to the very top. The show was opened up by Mossley's own Cabbage, a shirtless rabble that took a lifeless crowd and left them in a heaving mess by the end of their set.

Putting Cabbage on this tour could be dismissed as an experiment to see how their anarchic off-the-wall approach to their music fits with the perfect crossover alternative pop music of Blossoms, but the way that the kids who've queued for hours to secure their place down the front react and those that pile in to create a moshpit behind them provide empirical evidence that such a dismissal would be foolhardy.

Cabbage are riotously brilliant. They don't give a shit about convention, about playing the rules that bands need to do these days. Who else would write a song about wanking into a quiche and have it played on national radio or finish the set with a shirtless singer lifting a shirtless guitarist backwards over his head whilst another band member crowd surfs over an audience that was motionless a mere half an hour before. But that's what makes Cabbage so utterly mindblowing. 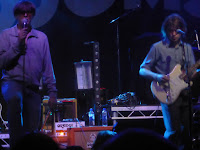 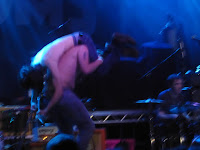 Guitarist Joe calls fellow vocalist Lee "Shaun Ryder in a tracksuit" but there's far more to them than the shambolic early days of the Happy Mondays, Cabbage's madness is intelligent, pointed and hits the target every time, whether it's the assault on American culture and politics that demands freedom for Steven Avery and death for Donald Trump set to something resembling a barn dance or the defiant exclamation of being born in the NHS and the Savile condemnation of Necroflat In The Palace. Do the crowd get it? Perhaps not what Cabbage are on about, but the seething moshpit and the flying beer indicates they certainly get the music.

The Human League's Don't You Want Me, released a decade before the majority of tonight's crowd were born, warms everyone up perfectly for Blossoms to make their late arrival on stage. They don't mess around either, starting with a trio of singles - At Most A Kiss, Cut Me And I'll Bleed and Blow - and a summer away on the festival circuit and the adulation of their chart success has given them the confidence to effortlessly face their biggest headline show to date without it feeling like an unnatural progression. You Pulled A Gun on me also makes a welcome return and the way that the audience sing along to the instrumental sections of the songs almost drowning out the band is an indicator of just how far they've reached into the psyche and the hearts of the youth of Manchester in such a short space of time. 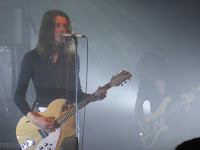 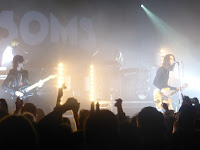 Everything feels like it's been stepped up, the performance, Tom's between song chat, the lighting, birthday boy Chris who's regaled with a celebratory Happy Birthday on the sound and the scale of the reaction. Even when things are slowed down for On Her Bed and the b-sides Polka Dot Bones and Across The Moor, the songs are treated like old friends in a way the less familiar songs of many of their Greater Manchester predecessors have had their songs loved, and quite rightly so as it's clear the distinction is nothing to do with quality, but other considerations.

My Favourite Room is dedicated to a boy in the front row who's been dumped by a girl called Sarah, who hopefully wasn't at the gig as three thousand people sang telling her to fuck off. It's a clever piece of crowd interaction that helps bring a natural break into the set after the celebratory romanticism of Blown Rose and the reflection of Onto Her Bed. So much of Tom's lyrics relate to relationship traumas and there's something warming and reassuring to have thousands singing them back to him as some sort of therapy in the way many of their legendary Manchester historical counterparts have achieved whilst turning it round into a communal celebration. 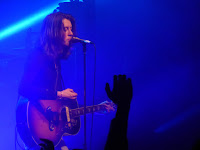 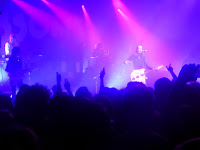 Deep Grass and Texia, despite a strange opening to the latter, show that the band haven't lost that rougher, darker psychedelic edge that characterised some of their songs that never finally made the grade, but when they finish with an exultant Charlemagne that has everyone in the room jumping around singing along and sent packing continuing to sing that melodic hook line in the cold Manchester night air.

This felt like just another step on Blossoms' unstoppable rise, but, as ever, one that they took as the most important thing that's ever happened to them as they don't look past the gig at hand. Their beaming faces at the end, even the inscrutable Josh cracking a smile, tells only half the story though, the other half is those walking out the door hearts full of love for a band that are bulldozing the route out of the North West for so many bands whilst transforming themselves into a serious major league contender. We can't wait to see them in the Apollo and Castlefield Bowl next year on their way to the arenas.