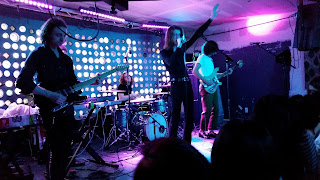 We arrived at the venue to find an amiable doorman marshaling the fans outside into three single file queues. Strange but it worked, doors (into the bar area) being at a very prompt 8pm. Things obviously weren’t going well with the (seemingly interminable) soundchecks though as we were not allowed into the venue itself until 9:25pm (with the first band having been due on at 9)

Blacktop Queen are a low-fi garage trio from Echo Park, California. Compared by some to early Queens Of The Stone Age but with more melodic punchier choruses to their short songs. Not really my thing but I enjoyed their set

By the time Blossoms finally made it to the stage shortly after 11:15pm the level of expectancy in the 280 capacity room has grown - the band’s reputation as a live force to be reckoned with has clearly preceded them (although it soon became clear that I wasn’t the only Brit in the room).

They start as usual with the killer trio of At Most A Kiss, Cut Me And I’ll Bleed and Blow and the 40 minute set is basically the set they’ve been playing in the UK minus the B-sides and & ‘My Favourite Room’ (so no opportunity for Tom to ask the usual question regarding any romantic casualties).
It’s a smaller stage than they’ve become used to playing and there’s no light show other than the in-house system. I actually welcomed this as visually I felt that the lights tended towards the overpowering on the UK tour – it was good to be able to actually watch the band again tonight! 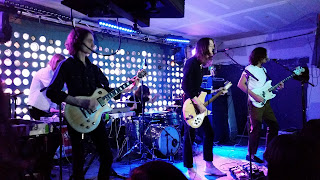 Tom is as confident a front man here as he’s become in the UK. The success of this, their first proper headline US show, is surely a marker for a more extensive US tour in 2017.

The keyboard laden magnificence of Texia, stripped tonight of the electronic weirdness which was tagged onto the start on the recent UK tour, is a particularly well-received highlight but the audience unsurprisingly erupts for set-closer ‘Charlemagne’.

Conversations revealed that at least 4 people travelled from the UK for this gig and several more claimed to be from Manchester when Tom asked the question on hearing that fair city’s name chanted by a group of lads.

Only a little over a year ago I was telling my US based sister and American brother in law about this ‘new’ British band and they were greatly impressed by the YouTube videos we watched when they visited me in Sheffield. Little did we know at that stage that Blossoms would become the 4th British act I’ve flown the Atlantic to see live in the US. It’s also appropriate that the performance that sealed the deal for me was Blown Rose when I saw the BBC Introducing film of them playing this at SXSW in March 2015.