Farewell To The Tapestry 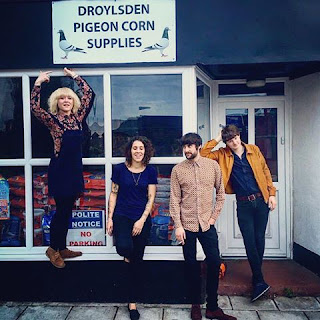 One of Manchester's finest bands have announced today that they're calling it a day after a show at The Witchwood in Ashton-Under-Lyne on Boxing Day, drawing to a close six mad years of The Tapestry. The four-piece always felt like they were on the brink, just about ready to make a breakthrough that never came, perhaps because they were always reluctant to compromise on their beliefs and principles to make it big, perhaps because they were already too old in a business that wants a bright young shiny band that can be manipulated and told what to do.  Those that witnessed their mad live shows, listened to their infectious catchy singles or spent time chatting to any of the four of them will mourn their passing after one final huge send off. 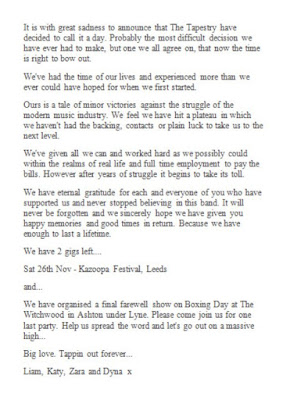 The Tapestry started off when a band front man Liam and guitarist Dyna were in went belly up. They got in Liam's partner Katy to play bass and then went through a number of drummers until Zara joined in 2012. By this point they'd already released two singles on iTunes - Rode Your Luck / Another Century and Take Turns / The Boy Will Not Return before they played a gig with the band Zara was in, got on with her and asked her to join them.

Things looked up for a while, they were asked to support The Courteeners on part of their 2013 tour and they also caught the ear of seasoned indie heroes as Reverend And The Makers and The Enemy whilst playing ever more raucous and crazy shows in their hometown. But, somehow, their chance never seemed to come, not aided by a lack of new material despite their set being crammed full of radio-friendly potential singles. Perhaps it was that those live shows were a little bit too on the edge, out of control for someone to take a punt on them, Dyna often rambling on incoherently between songs with liberal use of expletives.

By 2014 they'd have the likes of Blossoms and other bands that passed them by supporting them whilst it never quite seemed to happen for them. They released Right As Rain, the first single to feature Zara, and without the machinery in place behind them, it didn't do what it should and could have done for them. Still they played to ever growing crowds, Soup Kitchen, The Deaf Institute both being sold out and some stunning performances at Blackthorn Festival as well as winning a place to open up The Whiskey Sessions at Victoria Warehouse.

2015 saw them release the double A side Infatuation and Look Out, two songs whose only issue with getting them a breakthrough should have been that it was almost impossible to decide which one of the two was the better song, but still things didn't happen as other lesser bands sailed past to major label deals and the academies while they were left scratching their heads.

A new management deal, the release of the magnificent We Talk as a single in late 2015, a mental show in the back room of a pub as part of Stockton Calling (in the North East where they'd won a sizable loyal following), a sell out show at the Deaf Institute (with next year's big things Cabbage supporting) and another new single Connectives / Catacombs combined with a personal invitation from The Enemy to support them at their recent final gig suggested things were on the up. The truth is sadly something much different as they announced today that they are splitting at the end of the year following two more shows - at the new Kazoopa Festival in Leeds on November 26 and one final shindig back in Tameside at the Witchwood on Boxing Day.

The Tapestry will leave a gaping hole in the Manchester music scene. Loved by fans and other bands alike, their no-nonsense no-bullshit approach and their cracking tunes will be remembered fondly by anyone that came across them. The fact that they didn't make a breakthrough is down to a refusal to play the game, to say and do the right things and a business that can frown on bands once they reach a certain age.

Those of us lucky enough to have discovered them though will always hold a special place in our hearts and in our collections for a band that will live long in the folklore of the Manchester live scene.

Tickets for the Witchwood show are available here.