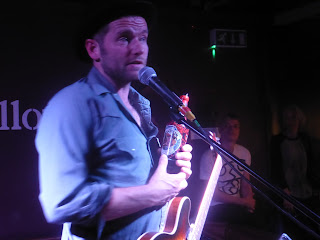 David Ford has been quiet for much of 2016 recording a new album for release next year and preparing for impending fatherhood. Ahead of that, he's out playing a few small intimate shows that both preview new material and revisit old favourites. We caught up with him in the cosy surroundings of the Fallow Cafe in Manchester for two sets littered with songs from his four albums, his numerous EPs, five new songs and a lot of conversation.

For a songwriter who's been in this game for twenty years now, as David reminisces how he quit Manchester University just over the way from the venue back then to pursue his music career back home in Eastbourne ("average age deceased"). He asks if there's any students in to which only the barmaid replies and he jokes he could be her father. Tonight's show is a reminder of how accomplished he is and what a wealth of great songs he has to his name in that time without so much as troubling the scorers in the charts. It's a fact that his audience seem more bitter and angry about than he does as he's completely at ease with swerving the trappings and the sacrifices that success brings.

That means, fortunately for us, we can still see him in such close proximity as we do at Fallow Cafe. Eighty or so kindred souls, silent to a person when David talks or plays, and listening intently to both his music and his generous, self-deprecating and modest stories that go with them. The set's split into two parts, as David says that gives us more of him and saves us a support act, joking that he's played that role himself so many times to indifference from fans of the headliner. 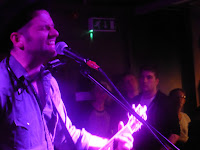 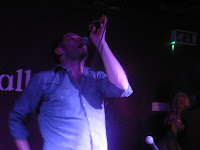 Playing solo tonight with a range of different instruments and demonstrating his mastery of looping to build and create songs where necessary, he starts off with a simple acapella version of Nothing At All. The range and versatility of his work is then demonstrated by the next three songs, the powerful emotional exaltation of Waiting For The Storm, the bar room blues rock of The Ballad Of Miss Lily and the more poised and poignant Isn't It Strange?

He then tells us that this tour is about him doing it for the sheer hell rather than supporting a record release and that he's making the set up on the hoof with a list of every song he's written and that he's taking requests. The first call is It's The Economy, Stupid and he regales us for five minutes about the song and the way politics has changed society for the worst since the start of Thatcher's years. Ford is no protest singer though, he makes intelligent and articulate commentary rather than hollow sloganeering  It's followed by a new song (he doesn't tell us titles of any of the four he plays tonight) that he describes as the "same song after I've done background reading" as he says he's written a whole album about the subject of macroeconomics as it fascinates him.

He then sits himself down at his keyboard and says he has a strange compulsion to play the next song, which is his old band Easyworld's Till The Day from their second album Kill The Last Romantic, a beautiful hopelessly romantic number that pointed the direction for so much of what he's done since.

The next request he gets is for Stephen, a song about the murdered Northern Irish policeman Stephen Carroll and the dignity of his wife Kate in dealing with the murder and its aftermath. Still clearly affected by it, he tells us how honoured he is that the family heard the song and that he's met them and considers them friends. Lyrically, it both touches the human side of the story, but also holds out a beacon of hope that some good can come from such horrible circumstances. There's absolute silence and respect from the crowd. 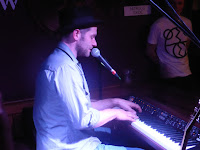 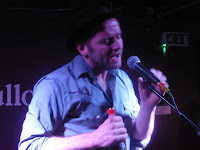 He then follows that with another new song, a delightfully poignant acoustic reflection on a distant past relationship "I tell myself it's over, but I know it never is, I thought I had forgotten about you many times before" and he finishes the first section of the show with O'Sullivan's Jukebox, a tale of his youthful discovery of alcohol and music in an Irish bar back in his hometown of Eastbourne where he learnt the joys of Guinness and the pub's jukebox.

After a half hour break, he comes back with Pour A Little Poison, a tale of a disastrous tour of backyard towns in America where he played to one man and his dog. He changes the mood then with the tear-jerking battered and bruised love song One Of These Days before opening up to requests again. A few shouts are misheard, most amusingly one that sounds like Autobahn at which he tells us he's had many Kraftwerk comparisons over the years.

He settles on the request for another new song though, given that we're among some of his most hardcore fans here as the show sold out in hours despite its late announcement. He tells us the great news that he's due to become a father for the first time in about a month, something that he would never have imagined. Ever obtuse though, he hasn't written a song about the impending birth, but about the scan, the moment the baby becomes real because you can see it. It's an intensely personal song, but one people who have been in that situation will relate to, and the line "I've never met you, but I already know your face, people will say it looks a lot like mine" is set to melt hearts when it's released.

Two of his best-known and best-loved songs follow, I Don't Care What You Call Me and Song For The Road, and the contrast between the bitterness of the former and the lovestruck journey of the second is something that both characterises Ford's work, but also why he's managed to resist any attempt at being put in a box to sell. Speaking of which, there's X Factor references in the third new song, probably called Real Damn Slow, a condemnation of the way everyone rushes around and wants instant gratification, delivered as ever with caustic wit and a eye for detail.

Slightly fazed by his own decision not to have a structured setlist, he jokes that he'd normally just play State Of The Union at this point, to big cheers from the audience, before he says he's not going to do it with a grin on his face saying "I'm a strong independent woman and you don't own me", before deciding to play it anyway. He almost destroys his own set up by standing on a monitor and knocking kit over as he reaches for the ceiling to survey the crowd.

His final new one is another song filled with optimism, lyrically it talks of not needing gold because he's found the love of a woman and that for an ounce of bad luck, he'll show you a mountain of good. Impending fatherhood does seem to have mellowed him and understandably has seeped into some of the new songs.

He finishes proceedings with Decimate, into which he weaves a medley of Young Hearts Run Free, December 1963 (Oh What A Night), Modern Love and (Your Love Keeps Lifting Me) Higher And Higher on the piano, chastising us for not knowing the Bowie song, and a defiant Every Time that looks back at his career and his decisions without regret and remorse before leaving us.

David Ford is still one of the most unique underrated and naturally gifted songwriters that this country has and the new material revealed tonight shows that he's still writing songs that will delight his audiences. Probably destined now not to get the success that some insist that he deserves, he's happy with his lot - and if he is, then so are we if it means more wonderfully homely intimate shows like the one we witness in Fallow Cafe.