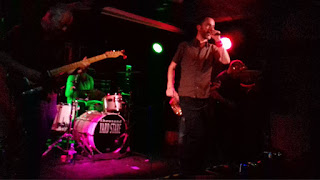 Such was the success of last year's one off reunion show that festival appearances, a new album and now a UK tour have followed. The Slough five piece show no signs of age as they motor through a seventy minute set, saving 0-0 After Extra Time and Wonderment for the encore by which point they have the all-ages crowd eating out the palm of their hand.

The band slowly warm up with the instrumental jam Junketing from their debut LP, 1991's Hands On before singer Stephen graces the stage with a rousing Version of Me and the crowd are suitably impressed. Stephen is a charming front man, prowling the stage all evening and taking time out to eat his trademark apple - tonight's apple of choice being a pink lady - whilst the band around him recreate their best compositions, each one of them beautifully crafted. New ones like Heimlich Maneuver (from the excellent Live At The Electric Studios album released earlier this year) sound every bit as good as classics like Buttermouth and Comeuppance. The former has an infectious chorus that delighted the faithful twenty five years ago and it is a joy to see and hear the band revisit their back catalogue; true pop always stands the test of time.

Petrichor is the second instrumental of the set and it allows the band and crowd to catch their breath before sequencing into an extended Comeuppance which allows guitarists Giles and Kevin to get lost in their craft. As it ends, Stephen reminds us that Comeuppance was their only chart hit, reaching number thirty seven, narrowly beating Teenage Fanclub in that week’s chart! 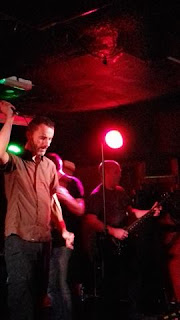 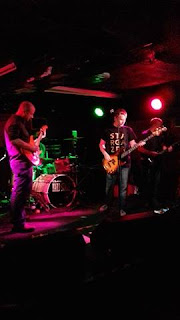 As the set progresses, the crowd lose their inhibitions and the gig becomes a real celebration - Seasonstream and Keepsake being particular highlights. When Stephen inquires who bought the second album, a loud cheer goes up and Stephen accuses the crowd of lying as it only sold six copies! Not to be outdone, one punter quips it only had three good tunes on it before the band launch into what has become their most anthemic moment of their reformation - the poptastic What's Your Level? With such tunes Thousand Yard Stare should have been troubling the top end of the charts on a regular basis.

Wideshire brings the main set to a close and it is another one of those tunes the band do so well - a rhythm section leaning towards an alternative disco groove and guitarists who know how to use a wah wah pedal creating a timeless sound to keep the aging pop kids in the crowd happy. Pleasingly, there are some younger faces here who lap it up too. The band leave the stage to a rousing cheer.

They could have called time there and then but in the encore, the band deliver their biggest aces. 0-0 After Extra Time surpasses everything that has gone before and Wonderment is seven minutes of pure joy - their debut single, released on their own label over a quarter of a century ago sounds as fresh as ever. Thousand Yard Stare turned the clock back and then some. We look forward to the next chapter.

We interviewed them here ahead of their Borderline show last year.