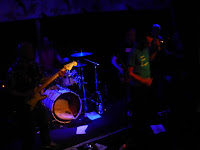 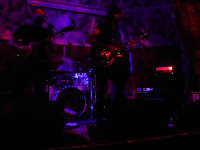 The reformation of Thousand Yard Stare was possibly not high on the list of "reunions you'd like to see" polls, but for those that fell for the charms of Slough's finest in the early 1990s it was one of the most exciting announcements of last year. Freshly armed with Live At Electric Studios, an album of revisited versions of their finest songs and a selection of new ones, they're on their first UK tour for twenty-three years and we caught up with them at the opening night at Manchester's Deaf Institute. Support came from Bolton's Our Fold.

It's felt like Our Fold's time has been a long one coming, but on the evidence of tonight's set, their long-awaited album should be something to treasure in 2017 as they translate their prolific songwriting philosophy to wax and metal. The likes of previous single She Goes On, surefire future one Terrific and their set-closing Passing Over get both their devoted and vocal fan base and the casual observer alike delighted with their impassioned delivery and the immediacy of the songs themselves. They don't deal in half measures, every song, every word comes from the heart and in Damien Riley they've got a front man with both the presence and the savvy that suggests they might be about to make good on all that promise they've showed the past couple of years.

Thousand Yard Stare come on to an instrumental Junketing, so Stephen Barnes makes a late entrance resplendent in his How Soon Is Slough t-shirt. It does allow the dual guitar attack of Giles Duffy and Kevin Moxon, Sean McDonough on bass and Dominic Bostock on drums to roll back the years with that unmistakable TYS sound that won them so many admirers.

The set is mainly culled from their debut album Hands On and the series of EPs that preceded it, their second album Mappamundi represented by What's Your Level and its lead single, and Stephen's first contribution, Version Of Me, songs that should have propelled them to greater heights save for the pre-Britpop insularity of major record labels that tarnished the legacy and future of so many bands around 1993.  He jokes at the end that we remember the songs better than they do, but he's doing himself a disservice. It takes the crowd a little time to warm up, especially as they dispatch with the two new songs in the set early on. Heimlich Maneuver and the instrumental Petrichor stand tall and proud with everything else around them in the set, they haven't tried to reinvent the wheel or be something they're not with them and as such they fit seamlessly in with everything else around them.

Mid-set we get a series of songs from the early EPs, Buttermouth, Keepsake and Three Doors Down represent the period where the excited music rags were foaming at the mouth at the prospect of a southern band shoving aside the Mancunians that had taken over the charts at the turn of the decade. Cottager is a brilliant slice of what was then a modern take on the English romanticism of The Smiths, and it, like most of the set, has aged really well, considering that they have probably laid resting on many a record shelf in the intervening years. Comeuppance, "our one big hit single, number 38", still sounds as commandeering and dominant as it was back then.

As we reach the end of the set, Wideshire, a song that had multiple versions of it, brings the main section to its inclusion, an expansive statement that says that Thousand Yard Stare could have gone off in many directions had they not come to a shuddering halt after Mappamundi's whispered release. Stephen loses himself in the sound his bandmates create, still looking like they're having the time of their lives and that feeling of bonhomie translates itself to the crowd too. This is no money-driven reunion, as the hundred and fifty of us snapping up cds and shirts isn't going to keep them in Ferraris, but a band that's reminding us just how great they were and enjoying themselves doing so at the same time.

0-0 AET was somehow criminally overlooked at the time it was released, full of clever football puns wrapped up in a song that was tailor-made for the indie dance floors of the time. By this time the crowd have let down their inhibitions and there's a load of good-natured moshing and reliving teenage years going on. They finish with the song that first brought them to the attention of many, Wonderment might be an eight minute journey, but it ends with Stephen and Giles down in the crowd with us.

It's great to have Thousand Yard Stare back and playing shows and clearly having a lot of fun doing so, ensuring that they're not forgotten by those of us that loved them two decades ago. The new material bodes well too that this isn't just a short-term thing, but something that they'll continue next year. Despite the onset of forty-somethingness they're still as thrilling a live band as they ever were.

We interviewed them hereahead of their Borderline show last year.