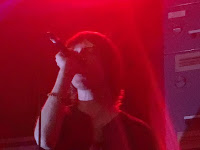 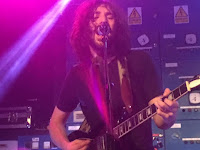 Two of the country's most exciting new bands have combined to go on a double header tour. Whilst Hidden Charms and The Vryll Society performances might differ in style, they both exude an exuberant energy and love of playing live backed up with sets that demonstrate they're both developing into bands that could break through big time in 2017.

Hidden Charms are on first and they've got a whole batch of new material since we last saw them play, to the extent that they feel confident enough to leave their debut single Dreaming Of Another Girl out of the set. It's a brave move, but one that they pull off with aplomb. They play all four songs from their recent Harder From Here EP, a set of four songs that showcases a diversity to them without ever compromising an impossible not to be drawn into whirlwind of energy. The set closer I Just Wanna Be Left Alone ends with Ranald in the audience playing harmonica and Josh throwing himself around with the front few rows after there's a spontaneous singalong to the chorus, something that is almost unheard of for an unsigned out of band town.

Their crowd is a mix of the sage old heads who love their undiluted raw rock and roll approach to their art, the way at times it feels like they're jamming intuitively and at others it feels like they're channeling the spirits of heroes departed without mimicking or sounding a tired art school imitation (even when they take on Captain Beefheart's Party Of Special Things To Do), and the other half is the cool kids from town, people in bands excited and inspired by them and how they look and sound so cool by just being themselves. Songs merge together or it could be two very different parts of the same song, but no one bats an eyelid as the groove and the beat turn volte face into something different. They depart to rapturous applause leaving the gauntlet well and truly thrown down to their mates The Vryll Society. 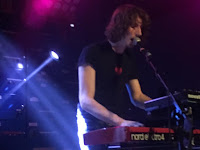 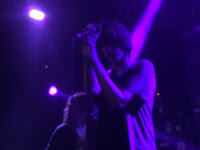 The Vryll Society's approach to their art is an altogether different one; those hard edges are smoother down so that they float like blissful clouds around the room. Songs like opener and early single Beautiful Faces, Coshh from their recent EP, Self Realisation and the epic closer Deep Blue Skies, where front man Mike leaves his colleagues half way through to take it off into the stratosphere, are exercises in the loose blissed out jams of the sort that the world was wanting The Stone Roses to come back with.

The Vryll Society are no wannabes though; they mean business from the start with Mike in a world of his own during these songs that demand we dance with them because they grab you by the hand and lift you up in a way few bands can manage. For now, we're either too cool or too uncool to do so other than one guy who loses himself completely in the music. People stop to film him which is a bit sad really, given that The Vryll Society are creating music that should have us all doing just that.