Cabbage - Necroflat In The Palace 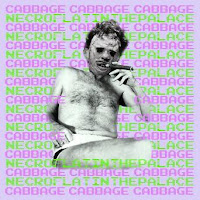 Just a month after their Uber Capitalist Death Trade EP was released, Cabbage are back with four more songs that take a journey into the mysterious world of their minds where they touch on subjects like Savile's relationship with the royal family and the Blairs and comparing the North / South divide to the one in Korea. It's every bit as wild, weird and wonderful as its predecessor.

"Dead bodies, just give me them" is the breakdown to the title track and by this point we've already had references to Princess Anne having an Iraqi ganging with the Blairs and an unsubtle reference to Savile's favoured relationship with the royals and the powers that be whilst he was committing all sorts of heinous crimes, the necroflat particular reference to his alleged love of dead bodies to fulfil his strange deviancies. The chorus "I was born in the NHS, I want to die in the NHS" a calling cry to rise up. Like most of Cabbage's finest moments, it's set to a tune that jumps from one place to another with seemingly little sense of thought to structure, but it always seems to land on its feet, swaggering from side to side, punch drunk, battered and bruised.

The wickedly titled Indispensable Pencil is similarly anarchic in its construction, its opening guitar riff coming back at you all the way through the song to its end, its vocals "you're too sensible but you're indispensable" almost indecipherable at points but it never feels like that's the point. The sense of madness, the not quite sure about what's coming next even on multiple listens is part of why Cabbage stand out from the crowd.

It's Grim Up North Korea is the stand out track here and, apart from the wanking in a public school quiche lunacy of Dinner Lady, is the best thing they've done so far. Comparing the North / South divide in Korea with that of the one in the UK by referencing amongst other things fracking, Hillsborough and Peterloo is further testament to them being one of the few bands around making pointed and educated political commentary these days. Behind the gimp masks and shitty babies at their gigs and their magnificent Cock Piss Cabbage t-shirts, these are smart cookies rather than sloganeering chancers. Musically it's more restrained too, less chaotic than what goes before and after it.

Dissonance completes the four song set, taunting the listener "you find yourself alone again" in the moments when it's not providing a headrush of frantic guitars colliding which you can visualise setting a dance floor bouncing that demonstrate further that Cabbage can do the traditional three minute rock and roll song far better than most of their contemporaries even when they're not rabble rousing and pointing fingers.

There's apparently a third EP coming at us in November to complete the trilogy and it's intriguing to see what they come up next. They're one of the least obvious bands to be on the brink of a breakthrough and some of their material will see them swerved by parts of the mainstream media. But we need a proper protest band in this bleak post referendum days living in austerity and Cabbage fit that bill perfectly.